Fantasy book where a sword is imbued with rune magic

It involved a boy who, if I can recall correctly, returned to his village that had been burned and his family killed.

He then travels with an old travelling blacksmith/mage who I think was part of a greater guild. I remember the boy forging a sword and while doing so the guy he was travelling with imbued the sword with the 4 runes of the world that would empower magic that was then channelled through it (although this was not found out until later in the series/book).

I think this series ended with the boy fighting his nemesis on a mountain side and discovering the properties of his weapon and using this to end the battle. 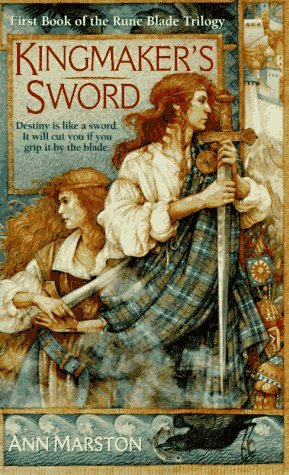 The Skai and the Tyr were one people long ago. But that day is lost in the mists of time. And now the Skai have sent a warrior to find the Rune Blade that could slice through the darkness of blood and violence that had falled [sic] across their land.

It's a similar sort of story. Father figure and a son, magic blade.

One of the reviews has a longer description:

Mouse is a slave. Dubbed Foxmouse because of his flaming red hair, he is now known as just Mouse and he is about to make his escape. Two nights ago his sole friend in the world was savagely assaulted and murdered while he watched and that horrific act simultaneously crushed Mouse and did away with any reason he had to stay in the filthy hole he has lived in for as long as he could remember. While on his headlong flight to freedom, Mouse runs into his past in the form of a hulking Tyran clansman on a journey to find his long-lost nephew. Suspecting Mouse may just be that boy, Cullin dav Medroch dubs the boy Kian and takes him under his wing. On their way back to Tyra, Cullin and Kian encounter a determined swordswoman by the name of Kerridwen who is on a quest of her own. When Kerridwen and Kian accidentally cross blades a bond is forged that takes them both unpleasantly by surprise and shapes the direction their paths will take from that point on.

I've no doubt you've long since found the book you're looking for, but I'm almost certain it's the The Darkweaver Legacy quartet by Mark Robson, the first in the series being The Forging of the Sword.

Calvyn, a teenage farmer, has gone out fishing for the day, and on his return journey, he aids kindly stranger Perdimonn, whose wagon has got stuck in the mud. Being the good Samaritan takes some time and effort, and leaves Calvyn with his face in the mud, after Perdimonn has miscalculated with his own particular way of doing things. The least Perdimonn can do is to offer the young lad a lift home...

The rune part of the magic is mentioned in a forum post by the author:

The magic in my world is actually a blend of other writers' ideas. I wanted to have something subtly different to anything I had seen, but that included some of the more traditional fantasy elements. Runes have been associated with magic in many different fantasy stories, including LOTR, but I didn't want my magic systems to rely on runes alone.

In keeping with other disciplines, I wanted there to be an element of mental discipline involved in magic. As the series moves on, you do get to learn more of the magical system, particularly in First Sword, where Calvyn spends some time at the academy in Terilla. The two elements - learning and mental discipline - are equally required to make magic. The idea of a basic mental exercise to fill your mind with the colour white drove me mad for weeks, as I actually tried to do it! Needless to say I did not succeed! I know that many others who have read the book have also tried it. :D

The mental element of magic is a derivative of the Eddings 'The Will and the Word'. However, I think it is dissimilar enough not to make people instantly compare the two forms.

It could be “The Anvil of Ice” by Michael Scott Rohan.

Not the answer you're looking for? Browse other questions tagged story-identification books sword-and-sorcery or ask your own question.

8
Fantasy book where a young prince becomes a mage
11
Fantasy novel, magic sword and different worlds
7
Need help finding a Fantasy Book with a sword wielder and sight sharer
5
Fantasy book: blacksmith/mage boy, a giant troll and a boulder rolling into the village
7
Help: Fantasy magic book series male genius similar to Name of the Wind
9
Book involviing "the sword with the silver pommel" and a kiss to open the mind's eye
5
Book series set in Celtic times in which a boy talks to a wolf
22
Fantasy story about a magic sword with limited "charges"
7
Book series: last dragon, transformed to a human by a wizard, falls in love with an elf