Why didn't Newt Scamander just release the Thunderbird the moment he arrived in New York City?

We only learn of Newt Scamander's purpose in going to New York City when he and Jacob enter the suitcase. His entire purpose is to bring a Thunderbird named Frank to Arizona.

Newt says in a bit of exposition monologue:

If you'd have got out, that could have been quite catastrophic. So he's the real reason I came to America. To bring Frank home. ... He's a wee bit sensitive to strangers.

Then we see him release the Thunderbird at the end of the movie without going to Arizona. We're left to assume that Frank flew to Arizona on his own (and hopefully without causing more havoc or exposing Muggles to magic).

So why didn't Newt Scamander just release Frank the moment he arrived in New York City, or even once he was within sight of land? He could have opened his suitcase, let Frank go, and then Obliviate the passengers on the ship who saw him (or used some other charm to avoid being seen, maybe even cast an SEP field around him and Frank).

Because that wasn't the real reason he came to New York.

This is a somewhat popular fan theory which I feel was best explained by John Granger of Hogwartsprofessor.com over here.

Basically the theory states that, both of the reasons Newt provided for his coming to New York were obviously ruses. (The Puffskien breeder was no longer in business, and the Thunderbird could have been released the moment he arrived.)

Dumbledore is working to defeat Gellert Grindelwald in the shadows — and he has agents working for him in this effort. Newt Scamander is one of these earliest ‘Order of the Phoenix’ members, hence his ability to have a wand though expelled from Hogwarts for cause.
The Back Story We’re Not Told (Yet): Second Thoughts about J. K. Rowling’s Fantastic Beasts & Where to Find Them

The theory goes more in depth, analysing all of Newt's interactions with Grindelwald, and showing the parallels to Dumbledore's views.

Whether or not this theory is true is debatable, but Newt's intro to 2017 edition of Fantastic Beasts and Where to Find Them, definitely alludes to it.

I am not yet in a position to tell the full story of my activities during the two decades that Gellert Grindelwald terrorised the wizarding world. As more documents become declassified over the coming years, I will be freer to speak openly about my role in that dark period in our history. For now, I shall confine myself to correcting a few of the more glaring inaccuracies in recent press reports.

In her recent biography Man or Monster? The TRUTH About Newt Scamander, Rita Skeeter states that I was never a Magizoologist, but a Dumbledore spy who used Magizoology as a ‘cover’ to infiltrate the Magical Congress of the United States of America (MACUSA) in 1926.

This, as anyone who lived through the 1920s will know, is an absurd claim. No undercover wizard would have chosen to pose as a Magizoologist in that period. An interest in magical beasts was considered dangerous and suspect, and taking a case full of such creatures into a major city was, in retrospect, a serious mistake.

I went to America to free a trafficked Thunderbird (....)

It would take months to contradict every other wild assertion in Miss Skeeter’s book. I shall simply add that, far from being ‘the love rat who left Seraphina Picquery heartbroken’, the President made it clear that if I didn’t leave New York voluntarily and speedily, she would take drastic steps to eject me. It is true that I was the first person ever to capture Gellert Grindelwald and also true that Albus Dumbledore was something more than a schoolteacher to me. More than this I cannot say without fear of breaching the Official Magical Secrets Act or, more importantly, the confidences that Dumbledore, most private of men, placed in me.

Notice how Newt is quick to deny the claim that he was working for Dumbledore, but then says that giving any more details would violate Dumbledore's trust. While Rita's claim may not be very accurate, it seems that Rowling is trying to hint that there is more to Newt than meets the eye.

Newt Scamander cares about Frank and indeed all of the creatures he works with. As you said, his sole purpose was to take Frank to Arizona.

So he aimed to take Frank all the way there. As happens in real life, one would assume that reintroducing a creature to its home environment can require careful monitoring and care. Animals that haven't been in their home environment for a significant amount of time don't tend to recognise it or want to be there, and may not be able to survive or certainly may struggle to thrive. See, for example, articles such as this one about reintroducing real-life predators into the wild. So there is a good chance that Newt may have been planning to stay near him and monitor him for some time.

Also, he said "the wilds of Arizona." If he hadn't had his troubles in the bank, Newt would have travelled to a quiet and nonpopulated area to release him. He should not have interacted with any Muggles in a significant way and Frank would have been released into an area where he would be safe and unseen. Indeed, from events in the Potter novels and sections of the Fantastic Beasts charity book, it would seem that both giants and dragons live in areas like this with no issues with Muggles.

Newt only released Frank because he needed to rain the venom.

It’s clear, even when he does release Frank, that Newt thinks the optimal thing to do would be to take Frank to Arizona. The only reason he chooses to do anything else is because it’s that or letting the wizarding world be exposed to Muggles. When Newt decides to release Frank in New York, it’s only after the president of MACUSA says they can’t Obliviate the entire city and he realized that Frank spreading the Swooping Evil venom in a storm could be used to Obliviate everyone and keep the wizarding world from being exposed, so Frank was the only one he knew of that could help.

“NEWT moves forward – he examines FRANK, a look of real tenderness and pride on his face.

NEWT
I was intending to wait until we got to Arizona, but it seems like now you are our only hope, Frank.”
- Fantastic Beasts and Where to Find Them: The Original Screenplay

From what Newt says, it’s clear that he’s only doing this because it’s the only way he can think to Obliviate the whole city. Releasing Frank in New York was still not the optimal solution, but the situation with a city of Muggles that just saw magic forced him to change his plan. If that hadn’t happened, then Newt would have continued with Frank to Arizona and released him there as planned. He cared about his creatures and wanted to make sure they were safe - without some compelling reason to do otherwise, he wouldn’t choose to just let Frank out somewhere in America and have him find his own way to Arizona, he’d take him directly there and make sure he’s safe.

In addition, there was a curse-to-kill policy on all magical creatures in America at the time, as Newt mentioned in the foreword in the latest edition of his book, so Newt would have had even more reason to not want to simply release Frank and let him fly on his own to his natural habitat.

“I went to America to free a trafficked Thunderbird, which was quite risky enough, given that MACUSA had a curse-to-kill policy on all magical creatures at the time. I am proud to say that one year after my visit, President Seraphina Picquery instituted a Protective Order on Thunderbirds, an edict she would eventually extend to all magical creatures.”
- Fantastic Beasts and Where to Find Them

Also, Frank did get to Arizona safely and he’s okay! 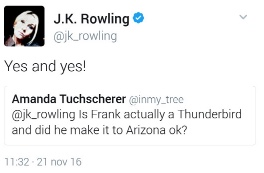 Not the answer you're looking for? Browse other questions tagged harry-potter magical-creatures fantastic-beasts plot-device or ask your own question.

9
Why did Newt Scamander carry the suitcase full of beasts, if he knew they could escape?