Can you name a novel about a human man who is the only survivor of a crash landing of a military spaceship on a planet that has cities left from extinct alien race?

Before the human man ended up an uncharted alien world, he and the rest of the crew evaded their enemies by hiding inside a large dusty cloud of gas. The cloud was large enough to hide an entire planetary system. One of the planets was human-habitable so they decided to land there. As it turns out, only one person survived the landing.

He was returned to normal health by robots that were remnants of extinct alien race. The aliens died long ago and left their cities and other technology mostly intact. The robots continued to maintain the world as they were programmed to do long ago. The man survived on this planet for several years after reprogramming a robot to be his friend, teacher, and butler.

Another human spaceship also crash lands on the planet. This time, the sole survivor is a woman, who just happens to be on the same side in the war. Her ship crashed after taking damage and tried to evade the enemy by hiding inside the same cloud of gas and dust.

The man tells the robots to restore her to health. They live together on the planet for a few weeks until an enemy ship discovers their world.

The two survivors use the robots to attack their enemies.

I've been trying to remember the name of this novel for a week. I think it was published sometime in the 1970's or 1980's.

This appears to be A World Called Solitude by Stephen Goldin 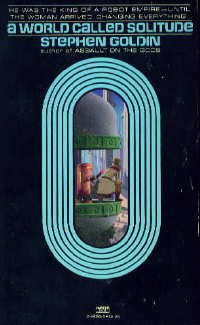 This the cover from the 1981 first edition by Fawcett Crest Books.

The first chapter is available here.

Unfortunately you can't find a synopsis with enough detail to corroborate your recollection, however I did read it about 7 months ago.

Birk Aaland is a refugee from Earth's tyrannical government. He finds himself stranded on an uncharted planet, which seems to be inhabited. His explorations reveal long-deserted cities perfectly maintained by the robot servants of their former inhabitants. Thus he becomes the marooned king of an isolated kingdom of machines. His life is a painfully lonely one and he spends eleven years without any human contact or companionship, tortured by memories of his former life on Earth and increasingly unable to imagine returning to it. Then his fitful peace is shattered when a spaceship crashes on his planet, and the sole survivor is a woman named Michi Nakamura. But she is not about to accept a fate in Birk's solitary world.

The dead civilization survived by their robots were extremely militaristic, their arsenals supplying weapons to defeat the enemy.

4
Story where aliens find and resurrect a man after the whole planet went extinct, then the man resurrects the entire species
6
Story about psychic humans who crash on a planet, fight off attack by enemy aliens
7
Young adult sci-fi novel about ennui and humanity's starship engines
8
Movie: astronauts visit a Mars-like planet with aliens passing as humans, alien embarks the ship, which destructs before landing on Earth
29
Old short about robots searching for the "Great Enemy" that wiped out mankind
8
Trying to identify an old sci-fi novel: a group of space travellers visiting a planet previously long-inhabited but regressed?