Why didn't Beren kill Morgoth when he had the chance?

Beren had Morgoth at his mercy, and he could've drove his knife into Morgoth while he slept.

Suddenly he fell, as a hill sliding in avalanche, and hurled like thunder from his throne lay prone upon the floors of hell. The iron crown rolled echoing from his head. All things were still.

Morgoth was in a deep sleep due to the spell of Lúthien, and thus being in his most vulnerable state. After failing to get another Silmaril, Beren and Lúthien immediately flee.

They were neither hindered nor pursued, but the Gate was held against their going out; for Carcharoth had arisen from sleep, and stood now in wrath upon the threshold of Angband. Before they were aware of him, he saw them, and sprang upon them as they ran.

Even if he had slain Morgoth there and then, he might have still gotten a shot at escaping. So why does he choose to escape, instead of ending Morgoth's reign of terror?

Beren was a Hero

A hero in Tolkien's world is often one who adheres to the good, the will of Eru and Manwë, further, one who achieves greatness through purity. Beren can be considered one of the Greatest Heroes, having been able to break through the Girdle of Melian, a feat that not many could do, save Morgoth and Turin (who can be considered a doom-filled hero).

Beren however was on a mission. Thingol sent Beren to reclaim a Silmaril if we wanted to take his daughter's hand in marriage.

“For little price,’ he said, ‘do Elven-kings sell their daughters: for gems, and things made by craft. But if this be your will, Thingol, I will perform it. And when we meet again my hand shall hold a Silmaril from the Iron Crown; for you have not looked the last upon Beren son of Barahir.”
The Silmarillion - Chapter 19, Of Beren and Luthien

However, after Morgoth falls from his throne in slumber, Beren, tasked with taking the Silmaril, has no other thought but to take the Silmaril and fulfil his task. However after Beren gets greedy and strays slightly from his fate he is doomed.

As he closed it in his hand, the radiance welled through his living flesh, and his hand became as a shining lamp; but the jewel suffered his touch and hurt him not. It came then into Beren’s mind that he would go beyond his vow, and bear out of Angband all three of the Jewels of Fëanor; but such was not the doom of the Silmarils. The knife Angrist snapped, and a shard of the blade flying smote the cheek of Morgoth. He groaned and stirred, and all the host of Angband moved in sleep.
Then terror fell upon Beren and Lúthien, and they fled, heedless and without disguise, desiring only to see the light once more.
ibid.

The first emphasised part shows that Beren became selfish, and from the light of the Silmaril was swooned into attempting to steal the rest. However, as always in Tolkien's Legendarium it was not the fate of the Silmarils to be taken by Beren, and therefore Angrist snapped and Melkor was stirred from his sleep.

Morgoth is a Vala

is I think a point worth mentioning - Beren would not have thought he would be able to kill him, and he probably wouldn't have been able to. Even the 'good' Valar couldn't (presuming that they would have done if they could have) kill him in the end and only 'thrust him out' through the Door of Night.

Quoting from Melkor's Wikia page, sourced from Chapter XVIII of the Silmarillion: Of the Ruin of Beleriand and the Fall of Fingolfin

All Morgoth's court was cast down in slumber by her song, but the Silmarils burned, and became so heavy that the head of Morgoth sagged upon his chest. He fell from his throne, the Iron Crown rolled away from him, and Beren cut a Silmaril from it. However, rather than leaving immediately with his prize, he tried to take another of the Silmarils. As he attempted to pry the second jewel loose, his knife snapped. One shard struck Morgoth's face, and he began to awaken. Beren and Lúthien fled in terror, but the werewolf Carcharoth bit off Beren's hand, and took with it the Silmaril.

They immediately flee after failing to get the second Silmaril precisely because Morgoth was no longer asleep, so in fact he never had the chance to slay Morgoth.

Because Morgoth was too big for any physical damage (from a knife!) to severely injure him.

Beren would have found it hard to kill Morgoth even if he wanted to. An analogy of an attempt to kill Morgoth with a knife could be: as futile as killing an elephant with a pen-knife.

His height is referenced here.

Now Melkor came to Avathar and sought her out; and he put on again the form that he had worn as the tyrant of Utumno: a dark Lord, tall and terrible. In that form he remained ever after.

Tall can be pretty ambiguous. To support this is this description:

Therefore Morgoth issued forth clad in black armour; and he stood before the King like a tower, iron-crowned, and his vast shield, sable unblazoned, cast a shadow over him like a stormcloud.

'Like a tower' is used for his height. That's pretty tall.

Now, what of his vastness?

The quote above sums up his vastness as well as his height, but for an additional reference I'm going to analyse the quote you included:

Suddenly he fell, as a hill sliding in avalanche, and hurled like thunder from his throne lay prone upon the floors of hell.

'As a hill sliding in avalanche'. That'll probably show how heavy Morgoth is, and that would show that he's pretty big. Some good artworks of Morgoth's size would be from Ted Nasmith and a Pinterest user: 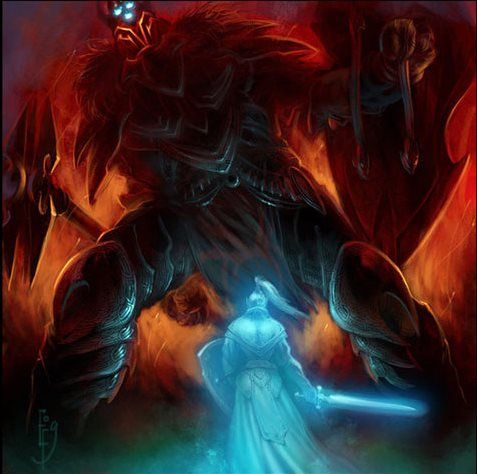 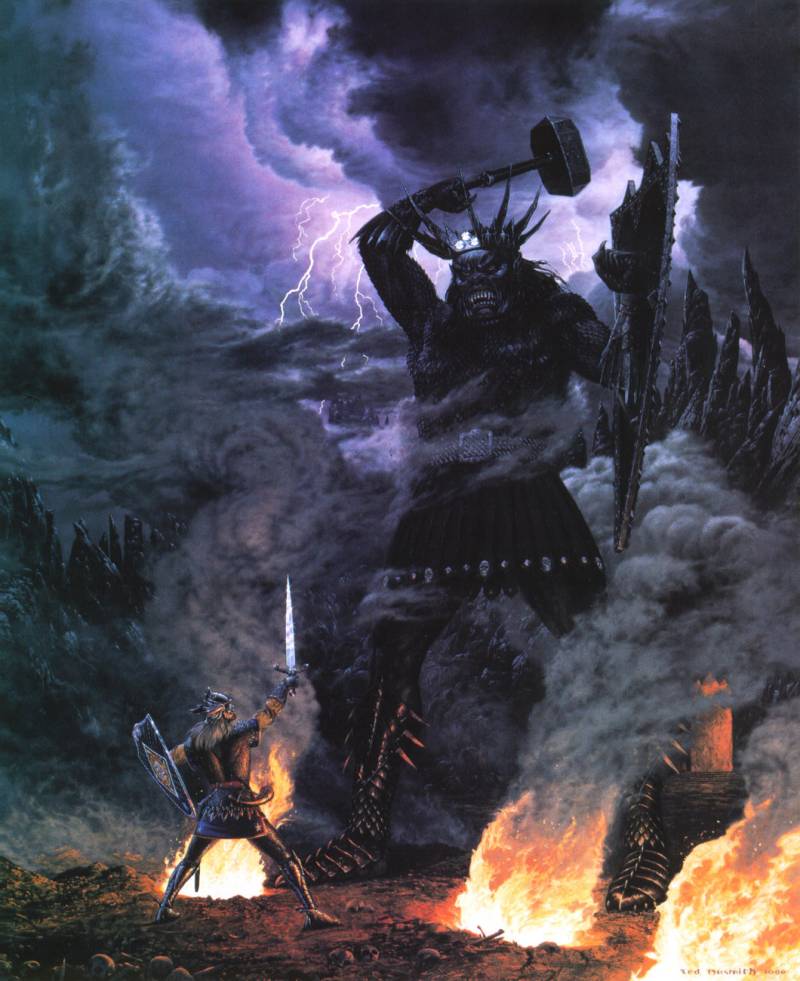 Therefore, due to the immense size of Morgoth, it would be pretty impossible for Beren's knife Angrist to have done any harm to Morgoth- and not cause him to wake up. Pretty sure no one's going to try killing a sleeping elephant with a pen-knife.

I agree with Gunman that Morgoth was huge,although his scale seems to vary even within a single scene. In the duel with Fingolfin Morgoth put his foot on Fingolgin's neck instead of squashing Fingolfin's entire body like an insect, and then seconds later a giant eagle with a 180 foot wingspan scarred Morgoth's face as if Morgoth was almost as tall as the eagle's wingspan, instead of grabbing Morgoth and flying away with him as if Morgoth was only 20 feet tall.

In one version of the story of Beren and Luthien the Iron Crown fell to the floor on its side.

The Silmarillion says the same:

He fell from his throne, the Iron Crown rolled away from him,

Beren's mission was to do as he had promised and get one of the silmarils to take to King Thingol for permission to marry Luthien. After Beren had a silmaril in his hand he might have thought of doing something extra like taking the other two silmarils or trying to kill Morgoth.

But as Beren was cutting the silmaril out of its socket his knife Angrist snapped and a shard hit Morgoth in the cheek, and Morgoth stirred and moaned. Beren yanked out the silmaril and he and Luthien fled like crazy. And can you imagine any other real or fictional hero who would not have fled in terror from a stirring Morgoth once he had done what he came for, without thinking of doing anything else?

Not the answer you're looking for? Browse other questions tagged tolkiens-legendarium the-silmarillion character-motivation or ask your own question.

46
Why aren't the Valar considered gods?
28
How large a form did Melkor take for his duel with Fingolfin?
13
What does JRR Tolkien say about the Elves (and other non-Human Races) and Free Will?

9
Why was Beleriand destroyed when Morgoth was defeated?
5
Why didn't Morgoth track the Eagles to find the location of Gondolin?
8
Was Galadriel present when Beren spoke to Melian
104
Tolkien calls Sauron Morgoth's Greatest Servant - But does he ever really earn that with his actions?
3
Why did Thingol refuse to let Luthien marry Beren?
4
Did the Valar actually care about Middle-earth?
7
Supernaturally Smooth Riding: A dream or the reality of Shadowfax's power?