How can Hank shrink without his Ant-Man suit?

I believe Ultimate Wasp once crawled inside Hulk's head to deliver a shock to his brain (to subdue, rather than kill), but the only terrifying uses for Ant-Man's powers that I recall was that one issue where he shrunk down for sexual purposes with a full-sized Wasp (the hero, not the insect, which would probably be even more terrifying).

I explored and found this page from Avengers #71 (may be NSFW): 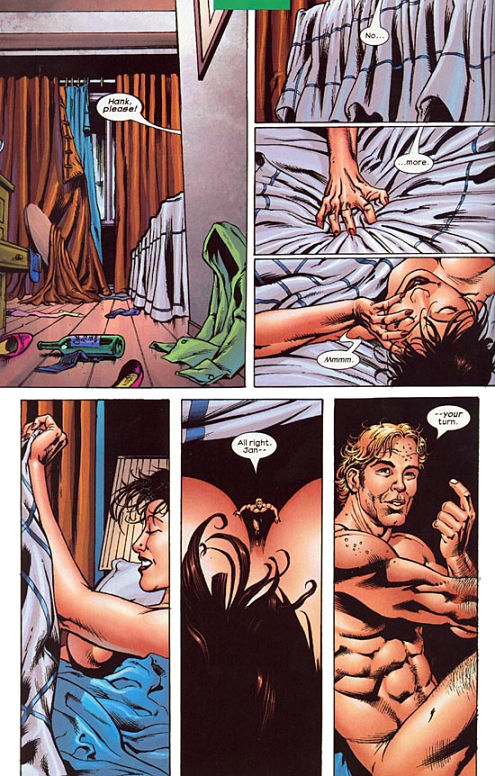 It shows that Hank is naked.

From what I can tell from the Ant-Man movie, one needed a suit for shrinking to work. You can't just inject Pym Particles into your blood stream and enjoy all Ant-Man powers without the suit. While shrunken, if you lose your helmet, the results can be disastrous (according to the movie).

Talking about comics, I tried searching other instances of naked Ant-Man, but I failed. Did the Marvel guys forget the facts just to show a unique (and terrifying) sexual fantasy? Is this an inconsistency or does Ant-Man not really need a suit to shrink in the comics? If Ant-Man doesn't need a suit to shrink, what in-universe reason was given to make it work (like Pym Particles in blood stream or exposure to Pym radiation)?

At least over most iterations - I'm not an expert, so I don't know if there are exceptions or even how many iterations there are - his suit is used to regulate the dose of Pym Particle exposure. The more exposure, the more drastic the size change, so he needs a way to fine-tune that. However, once the process of shrinking/growing is complete, the suit is not needed, anymore; at least not to maintain his size or shield him from side effects or some such. See also this Wikia article or (as referenced there) Tales to Astonish #27.

Therefore, the likely scenario here is: Shrink in suit, take off suit, Snu-Snu, put on suit, grow back to normal.

There are other ways of exposing objects to Pym Particles. Initially it was a liquid, later on a gas, so whatever way of distributing those would work. The issue with many of those however is the exact dosage, which is why the suit remains Ant-Man's preferred method of shrinking himself.

Additionally, repeated exposure to Pym Particles enables the user's body to naturally produce their own Pym Particles, which allows shrinking and growing without external exposure. So - depending on when that comic takes place - another possible scenario is simply: Hank naturally produces Pym Particles, shrinks, Snu-Snu, grows back to normal, without the suit being involved at all.

By the way, the helmet, in the comics, is his means to communicate with insects. It's a transceiver tuned to the ants' communication 'channel'. There's nothing critical for survival in there. In the very first comic(s), he doesn't have it, yet, resulting in a less-than-comfortable ant encounter which ultimately leads to the development of the helmet.

The Ultimate version of Hank Pym does not require the suit OR an injection of Pym Particles to grow/shrink. Using his wife Janet's mutant blood as a base, he created a serum which permanently altered his physiology after only a few uses, thereafter allowing him to grow or shrink as needed with only a thought - essentially giving himself powers.

The suit is merely a way of clothing himself, given that normal clothing rips apart if he grows while wearing it. The special fabric of the suit allows it to grow and/or shrink along with his own body. The helmet, on the other hand, is merely a transmitter which allows him to communicate with insects. Neither the suit nor the helmet is required, however.

In fact, Ultimate Hank Pym grows without the suit on several occasions, resulting in a giant naked Hank - something that once landed him on the front page of a tabloid newspaper.

Again while showing off his shrink ability to the Defenders in Ultimates 2 Vol 1, Issue 6:

Hank Pym seems to have invented a number of other ways of applying Pym particles to shrink people/things in the comics. Presumably he relied on one of these methods.

In Deadpool #66, Deadpool aquires some Pym particle spray which he uses to shrink Rhino and make him a keychain ornament.

In Uncanny X-Force, Fantomex has a gun that works on Pym particles, which he uses to shrink 'The World'.

In the comics, it was explained back in the 1980's that Hank absorbed enough Pym particles to no longer need any external gadgets. But eventually his body could no longer handle the strain of size transformation, which is why he eventually gave up the "Goliath" persona to Hawkeye/Clint Barton in Avengers. Then if you check early West Coast Avengers (4-12 I believe) [later "Avengers: West"] it's Firebird/Espirita who figures out that Hank had been shrinking not only himself, but clothes and objects in direct contact. So they discovered that Hank was able to produce a "Pym particle field" around his body. He then took an identity as "Dr. Pym, Scientific Adventurer" where he essentially wore clothes filled with tiny gadgets that he could enlarge and shrink in battle instead of growing/shrinking his body. So no, even before the Ultimate version, he didn't need the suit to shrink.

Not the answer you're looking for? Browse other questions tagged marvel comics ant-man or ask your own question.

11
Have Ant-Man's terrifying powers been explored by the authors before?

5
How does Pym particle containment work?
12
What are the differences between Ant-Man and The Atom?
5
How does Ant-Man shrink?
18
How can Ant-Man ride Anthony?
18
Why was Scott Lang chosen as Ant-Man over Hank Pym and Eric O'Grady
4
Has a super being like Thor or an X-Man used the Ant-Man suit?
8
Does Ant-Man need his suit to shrink?
11
Have Ant-Man's terrifying powers been explored by the authors before?