What is the name of the Mirkwood elves' realm?

Inspired by this question (that mistakenly refers to Rivendell), it occurs to me that I don't actually know the name of the realm where the Mirkwood elves live. I don't recall it ever being mentioned in either The Hobbit or Lord of the Rings.

What is it called?

In the North also there had been war and evil. The realm of Thranduil was invaded, and there was long battle under the trees and great ruin of fire; [...].

The Lord of the Rings: Return of the King - Appendix B: The Tale of Years

Thranduil, king in the north of Greenwood the Great, was one of these. [...] Thus in one essay Thranduil's realm is said to have extended into the woods surrounding the Lonely Mountain and growing along the shores of the Long Lake, [...].

Unfinished Tales: Chapter III - The History of Galadriel and Celeborn: Appendix B - The Sindarin Princes of the Silvan Elves

So it was that Sauron prepared two strokes- in which many saw the beginnings of the War of the Ring. They were made together. The Orcs assailed the realm of Thranduil, with orders to recapture Gollum; [...].

Unfinished Tales: Chapter IV - The Hunt for the Ring: Of the Journey of the Black Riders according to the account that Gandalf gave to Frodo

Its capital is called the 'Elvenking's Halls', also known as the 'Halls of Thranduil'. This realm did not take any name of Sindarin dialect, as the Silvan Elves did not speak Sindarin, even though some of their ancestors were of Sindarin origin.

Thranduil's Halls are named in the map: 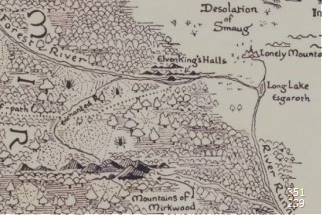 The Woodland Realm, later known as Mirkwood, was a kingdom of Silvan Elves located deep in the Forest of the Wilderland beginning in the Second Age. King Thranduil of the Sinda rules over the Silvan Elves. The Elves of the Woodland Realm, unlike many Elves, were known to be less wise and more dangerous, but were nevertheless one of the most powerful and legendary of the Elves of Middle-earth.

So Mirkwood is known as the woodland realm.

If you're asking "What did the Woodland Elves call their realm in their own language" then the answer depends on the Era.

From the Days of the Trees up to medium the Third Age, the region was mostly called "Greenwood The Great". The literal translation in Sindarin is Eryn Galen.

In the eras of the central tales of the Silmarillion, the Elves called the corrupted pine forests of Dorthonion Taur-Nu-Fuin (forest under nightshade). The name was re-used to refer to Mirkwood starting in the days of the Necromancer (second millennium of the Third Age).

After the defeat of Sauron, the Woodland Elves renamed the region to Eryn Lasgalen - Wood of Greenleaves (very likely referring to Legolas Greenleaf).

Note that the term "realm" is added in English but the Elves do not use this term (ardh in Sindarin) to refer to their forest domains. Lothlorien is probably the best known woodland realm in LOTR, the name means "Gold of the Blossom". Dorthonion means "Land of Pines".

48
Can the Elves do magic?
68
Why was the riddle on the way to Moria written in Elvish?
32
How does Smaug know the name Oakenshield?
36
Did J.R.R. Tolkien ever write a deeper connection between The Hobbit & Lord of the Rings: Fellowship of the ring?
5
Did Gandalf ever have a romantic partner or a spouse?
7
What kind of buildings do the wood elves of Mirkwood live in?
5
What was “Gollum's Song” based on?