Did Frodo lose a finger on Mount Doom?

In the Return of the King film, Gollum bites the finger off Frodo. In later scenes, like the Coronation of Aragorn and Leaving the Shire, we see that Frodo has gotten the finger back.

How is this possible? How did Frodo get his finger back? 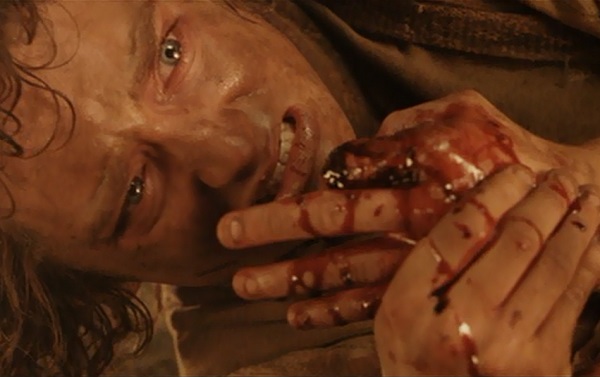 Yes, he lost his finger

In the film, Frodo loses the top part of his left index finger. The first image in your question proves this, and we can see Gollum discard it in another shot:

This is notably in contrast to the text, where Frodo loses the ring finger of his right hand (emphasis mine):

[Sam] sat up and then he saw that Frodo was lying beside him, and slept peacefully, one hand behind his head, and the other resting upon the coverlet. It was the right hand, and the third finger was missing.

Return of the King Book VI Chapter 4: "The Field of Cormallen"

No, he never got it back

That being said, I've heard it claimed that Elijah Wood's finger is visible later in the Mount Doom scene, which is possible (though I struggle to see it; I suspect most people would, unless they were specifically looking for it); consider (as always, click to embiggen):

However, even here it's clear that the intent is to show the finger having been removed; this, as with any later shots where the finger is visible, is just a production mistake.

20
How did Gollum know Frodo was going to destroy the ring?
47
Why did Sauron react the way he did when Frodo put the Ring on inside Mount Doom?
20
Does Smeagol/Gollum ever truly align himself with Frodo and Sam, or is he a'schemin' the whole time they're all together?
17
Why did Gollum fail to seek out Bilbo?
2
Why didn't Sauron signal the Orcs that Frodo and Sam were at Mount Doom?
6
How did Gandalf get his second staff back after it was destroyed by the Witch-king of Angmar?
12
Why did it take less time to go from Rivendell to the Shire than it did to go from the Shire to Rivendell?
39
What was the white gem Frodo wore?
38
In "The Shadow of the Past", who helped Gandalf watch the Shire while he was gone?
4
Why did both Frodo and Aragorn keep Gollum a secret for seemingly no reason?