What happened to Gillian Taylor after she joined Kirk and the whales on the Klingon ship? Wouldn't people be looking for her?

At the end of Star Trek IV: The Voyage Home,

20th century marine biologist Gillian Taylor goes back to the future on the Bird of Prey and is given her own ship to go exploring the galaxy in.

Is there any discussion about what happened with her after that (canonical or not)? Any "continuing adventures in 23rd century marine biology" stories?

More importantly, was there any discussion about people on Earth missing her, or investigating her disappearance?

There's a throwaway line in the film to explain her decision to time-jump without a second's thought.

GILLIAN: What are you talking about? I'm coming with you.

KIRK: You can't. Our next stop is the 23rd Century.

GILLIAN: What do I care? I've got nobody but those whales...

While the clear implication is that she has no family and friends, there's nothing specific beyond that within the main canon. She doesn't appear in any future films or within any of the TV shows. The final mention of her is that she's been given her own ship and sent off on a mission to recruit some divers to work with her whales.

"You're going to your ship, I'm going to mine. Science vessel, bound for Mer to recruit some divers to help the whales. Why, the next time you see me, I may have learned to breathe underwater!" She grinned, honestly and completely happy for the first time since Jim had met her. "I've got three hundred years of catchup learning to do," she said.

For the record, the factbook "Who's Who in Star Trek 2" identifies her ship as the USS Clarke and her organisation as the 'New Cetacean Institute'.

There are several mentions of her in authorised fiction, both relating to the present day and her future in the 23rd century.

In the story "Whales Weep Not" we learn that her disappearance was reported to the police by her landlady. The novel also confirms that she has no family or significant ties.

“She doesn’t have any family. Only child, you know. Her mother died a couple of years ago. Cancer if I recall.” She scratched at a curler and thought for a minute before adding, “she never talks about her dad. I figure he’s long gone. Only steady boyfriend she had quit coming around when her mom got sick."

and that the police left her case open, in the event that she turned up again.

The case couldn’t officially be closed but that didn’t mean he was going to put any more time into it either. After placating Mrs. Schimmerman with some story he would quietly add the folder to the inactive file. He just hoped that Dr. Gillian Taylor was happy with her whales.

She makes a brief return in TOS: Debt of Honor, set some 10 years after her arrival in the future. 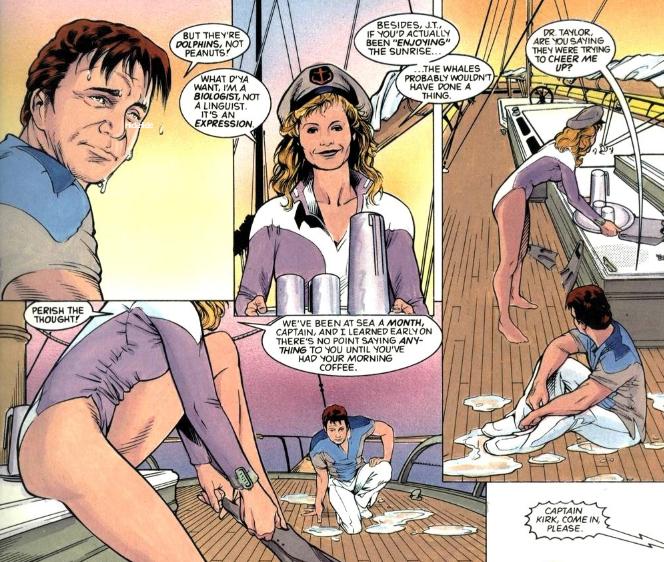 She attended Kirk's memorial in 2293

Many individuals had spoken throughout the morning. Dr. Gillian Taylor, a twentieth-century cetacean biologist who had helped the captain and the Enterprise’s command crew bring a pair of humpback whales into the present in order to avert Earth’s destruction, had recalled meeting Jim, being charmed by him, and at last being enlisted to his cause

Crucible: Spock - The Fire and the Rose

The factbook Star Trek: Federation - The First 150 Years lists her 2299 book in its fictional bibliography

And the (chronologically) final mention of her is in 2310, as part of an expedition involving Captain Uhura, Carol Marcus, a mysteriously missing humpbacked whale and a renewed Genesis Project.

It wasn’t God who had summoned the darkness, but a woman named Carol Marcus. Even without God making an appearance, this was Genesis: the birth of life on a lifeless world. The rebirth of a failed project. But no birth is without danger. Lost in the birth-tempest was a young humpbacked whale, named Harpo.

In the observation room of the drift-station Madrigal, Gillian searched the waters and swore.

Strange New Worlds II - The Hero of My Own Life

To add to Valorum's answer. She's assigned to a science vessel to catch up on 300 years of...everything.

GILLIAN: I'm so happy for you, I can't tell you! Thank you, so much.

KIRK: Wait a minute! Where you going?

GILLIAN: You're going to your ship. I'm going to mine. Science vessel. I've got three hundred years of catch-up learning to do.

KIRK: You mean this is ...goodbye?

GILLIAN: Why does it have to be goodbye?

KIRK: Well, like they say in your century, ...I don't even have your telephone number. ...How will I find you?

8
Have we seen any other alien in Starfleet whose native civilization isn't warp capable?

24
How did Kirk get the whales out?
18
The ultimate fate and influence of the HMS Bounty
7
Do we ever find out what happened to Dr. Giger or The Cellular Regeneration and Entertainment Chamber after the DS9 episode "In the Cards?"
17
Did Edith Keeler really have to *die*?
6
In Star Trek IV: The Voyage Home, how did Kirk and Gillian successfully beam aboard the Klingon ship together?
11
What are the Klingon symbols for 11 and 12?