When did Jyn Erso become a Sergeant, like her toy says she is?

The Hasbro toy for Jyn Erso labels her as "Sergeant Jyn Erso" and repeats this claim multiple times in the product description. For instance:

Join the defiant Sergeant Jyn Erso on a top-secret mission to steal the plans to the Galactic Empire’s most fearsome and deadliest construction, the superweapon known as the Death Star, and embark on an epic journey alongside the Rebel heroes, where Imperial officers are charged with protecting the Empire’s invention against the Rebels at any cost. 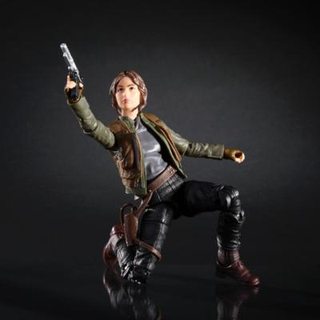 This surprised me greatly that Jyn held the rank of Sergeant. I had figured that she was someone like Han Solo, who in Episode IV was not a formal member of the Rebel Alliance and did not hold a rank (and despite that, he too was allowed to participate in top secret meetings due to his connections to important people).

I checked Wikipedia's page for both Rogue One and Jyn Erso and neither mention her being a Sergeant. I'm going to assume that Hasbro has a good reason for giving her that rank though.

When did Jyn Erso become a Sergeant?

This was addressed in the novelisation. Just before the infiltration of the Scarif Base, she was offered a field rank by Lieutenant Sefla and asked to make a short speech to the troops.

“Small problem with the troops,” Sefla said.
Jyn waited.
“They like you, ma’am, but if you want to give a speech they’ll have trouble respecting you. You’re not military. You’re not even Alliance.”
“Not really my problem, is it?” Jyn said, more nonplussed than irritated.
“Hardly the right attitude, ma’am.” Sefla arched his brow. “Morale is everyone’s problem. So if Captain Andor won’t do it, it falls to me as an Alliance SpecForce lieutenant to brevet you the rank of sergeant. Congratulations.”
Sefla never smiled, but Chirrut was laughing silently.
“You’re a cretin,” Jyn said.
“Yes, Sergeant,” Sefla replied, and walked back toward a cluster of Pathfinders.

Note that the Rogue One Visual Dictionary identifies that her brevet rank was "affectionate" (such as one might give a child touring an army base) rather than a formal advancement.

SpecForces officer Taidu Sefla officially outranks Sergeant Melshi and Jyn Erso (who holds no formal rank, so Sefla gives her an affectionate brevet rank of sergeant), but respectfully defers to Captain Andor’s unit formation. A strong, capable soldier, Sefla has a lot of heart that he brings to the fight against the Empire, and he gives it his all in every mission.

54
Did Leia know Luke was her brother when she kissed him?
3
When did the Galactic Republic become known as the Old Republic?
12
When did "Darth" become a title?
6
Why does the Tie Fighter strafe Jyn when she was on the tower?
8
How did the Alliance find out Liana Hallik was Jyn Erso?
15
Did Jyn know her father worked for the Empire before the Rebellion told her so?
6
Why doesn't the Second Sister deactivate her lightsaber when she gets it stuck in the ground?
2
How did Jyn manage to keep her necklace from the Empire?