There's a trade paperback book that I purchased at my college bookstore back in 1990-1991 that really caught my imagination, but I can't remember the title or author to go find it again.

The story revolved around the Hindu crew of a commercial starship discovering an ancient escape pod drifting while illegally traveling in an exclusion zone, in the solar system of a human colony world. The exclusion zone was a former battlefield from thousands of years before, between two other alien races, and is filled with debris and wrecks from the combat. Naturally, things don't go as planned. The parasitic organism, a survivor from the previous war, attacks the crew member spacewalking to investigate, and then starts attacking the rest of the crew. Several crew members escape in a shuttle, trying to get to a nearby world colony.

The parasite cobbles together a missile to attempt to destroy the shuttle, but upon realizing that there's a planet of potential hosts nearby, it also builds it's own escape ship out of parts of the abandoned ship, and follows the survivors. The survivors land at the planets main city and spaceport, but their story about the parasite isn't believed. The pursuing parasite eventually lands and infiltrates the starport, eventually takes over a nearby prison and uses the inmates as biological feedstock for converting them into what was essentially lanky, hivemind humanoid infantry with wrinkly, hound dog features (yes this sounds really weird, but bear with me). Eventually, the humans are fighting a losing battle against a quickly growing insurgency in the colony's main city, pulling back into the mountains and hinterlands to escape. It ends with human ships arriving and glassing the planet with nukes to try to contain the infection.

The alien parasites appearance changes throughout the story; as I recall it resembled a broomstick with centipede legs initially on the Hindu starship, but it eventually infected and converted humans by inserting a converter into their bodies, either through the mouth or anus. This created a weird, thin human/hound dog like hybrid by rewriting the hosts DNA.( hound dog like, as in long ears and wrinkled snouts and faces with rolls of skin covering their eyes) There is actually a scene in the prison, towards the end where a hive leader is being created by physically joining several humans who become connected at the stomach and morph into a single entity. A lot of body horror elements are involved.

There was a sequel that explored the parasite race's past, but I can't remember it's title either. These books have stuck in my mind for decades... any help in recalling their titles and the author would be great. Thanks

That would be "The Vang: The Military Form" by Christopher Rowley.Amazon 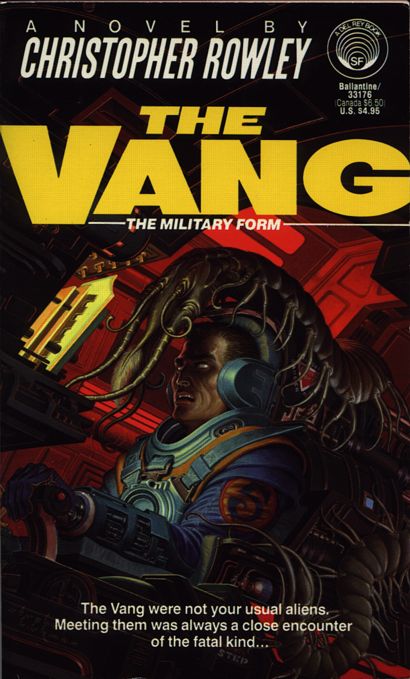 And the sequel was The Vang: The Battlemaster 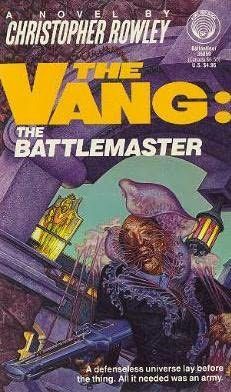 No description is necessary - OP was spot on. Most accurate extended description I've yet seen.

EDIT - Although, come to think of it, while a bunch of prisoners merge to form the Ruling Form, I don't remember the "mouth to anus" thing, and that may well be borrowed in the OP's mind from the movie "Centipede".

Not the answer you're looking for? Browse other questions tagged story-identification books alien-invasion or ask your own question.

17
Trying to identify a short story about a dog and how it's being left behind resulted in a human /alien race alliance
14
Starship captain put on trial for destroying a colony
9
What is the name of a short story by Ursula K. Le Guin about a spaceship and a parasite alien?
9
Earth occupation/invasion book I read in the 90s
11
Looking for book of short stories. One with a girl who gets infected by an alien parasite/symbiote
7
Humorous story about alien invasion
13
Book about alien eggs found in an asteroid that crashes in the sea
7
Scifi novel about a prison station in the sun that turns into an alien invasion