What's the name of this sci-fi story with a wall that cannot be crossed? [duplicate]

Ask Question
Asked 8 years, 4 months ago
Active 2 years, 11 months ago
Viewed 2k times
13
This question already has answers here:
Identify a short story about a wall on a planet at the edge of a tiny universe (2 answers)
Closed 2 years ago.

In this story, the characters live in a world with a wall that cannot be crossed. One day someone finds a way to get to the other side and discovers that as he's getting away from the wall and further into the other side, he's just coming back to his own world.

"The Wall of Darkness", a short story by Arthur C. Clarke, is my candidate. A world is divided by a wall (that turns out to have only one side, and acts like a Moebius strip) and the protagonist attempts to scale it, only to end up back where he started.

Here and here are informal summaries of the tale. Check to see if any of the details ring a bell.

"Wall Around the World" by Theodore Cogswell. The wall can't be crossed as it separates the world of magic from the normal world. Great story. Very different from the AC Clarke "Wall of Darkness". 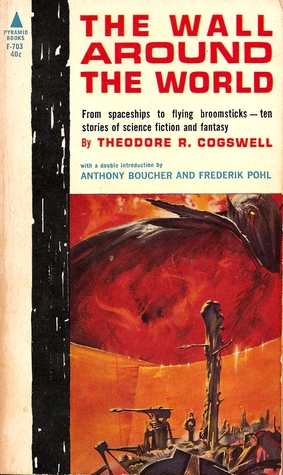 The Wall around the world fascinates 13-year-old Porgie Mills. He wants to know what is on the other side, but it towers over 1000 feet, glassy smooth and higher than anyone can fly on a broomstick.

His obsession affects his magical schoolwork. His teacher Mr. Wickens informs his uncle and aunt, with whom he lives, but no amount of discipline can diminish the boy's interest. Mr. Wickens himself warns Porgie not to follow in the footsteps of his father, taken by the Black Man for writing a paper on forbidden technology. He even briefly shows Porgie his father's work; Porgie glimpses a sketch of an airplane and is inspired to secretly build a crude glider.

On his 14th birthday, Porgie is ready. He launches his contraption, with his broomstick attached to the frame to provide additional lift. Along the way, he encounters his bullying cousin "Bull Pup" flying below and takes the opportunity to taunt him, but when the glider loses altitude, Bull Pup grabs hold of a fragile wing and shakes it. With a supreme effort, Porgie telekinetically makes Bull Pup's broomstick jerk around erratically and the attack stops.

Porgie then sets his sights on the Wall. When he gets high enough, his broomstick stops working, but Porgie pilots his glider laboriously upward until finally he is over the Wall. He manages to land on its top just before his mistreated glider breaks up.

While he is resting, he spots the Black Man flying toward him. In his panic, Porgie falls off the Wall, but is caught by the Black Man, who reveals himself to be Mr. Wickens. The schoolteacher informs Porgie the world outside is based on technology. The Wall was built and people put inside in order to develop their mental abilities. Mr. Wickens then takes Porgie to be reunited with his father.
-Wikipedia

15
Identify a short story about a wall on a planet at the edge of a tiny universe
25
Anthology: underwater aliens / an impassable wall / a moon with an incredibly low orbit
32
What is the geometry of the universe in “The Wall of Darkness” by Arthur C Clarke?
6
Looking for story young boy flies over wall on broomstick