Was Cad Bane a Chiss?

So with the release of the 2017 novel Thrawn and with Grand Admiral Thrawn becoming a villain on the Rebels animated Series we now know that the Chiss Acendancy is Canon. Now anyone who knows about the Chiss knows that they have Blue Skin with glowing red eyes. The best example of which would be the Grand Admiral himself. 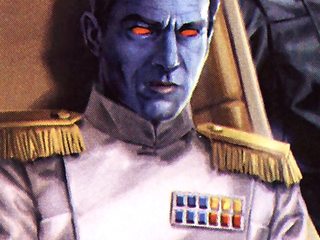 However I'm wondering if the bounty hunter Cad Bane from the Clone Wars animated series was also a Chiss since he has the same blue skin and red glowing eyes: 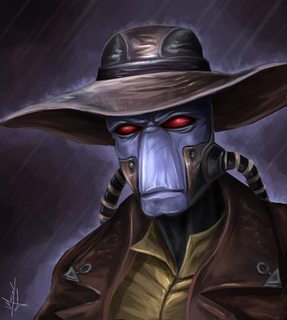 The reason I think that he is Chiss and not some other species with similar features is because in the novel Thrawn nobody can figure out what species Thrawn is by looking at him. Nobody had really seen a Chiss before due to their isolationism and hiding in the Unknown Regions. I'm wondering if his wouldn't also be the case with Cad Bane. So is he a Chiss and if not what species is he?

Cad Bane is a Duros

This is confirmed on his entry in the official Databank (emphasis mine):

A ruthless bounty hunter from the planet Duro, Cad Bane was the preeminent blaster-for-hire in the galaxy at the time of the Clone Wars.

There's really no reason to suspect a connection between the two races:

In the novel Thrawn, people unfamiliar with Thrawn's background tend to assume that he's a Pantoran with an eye condition, which is a much closer match than the Duros.

No. According to Wookieepedia, we was a Durosian.

On top of being a total badass, Cad Bane is a Duros. They're the Star Wars version of the "grays" from pop culture. They can be traced all the way back to A New Hope in the famous cantina scene that gave rise to so many core Star Wars species back in the earliest days of the IP's growth. Unlike the Chiss, Duros evolved independently from humans, thus the unusual head shape and missing familiar facial features. Although, like the Chiss, they're quite cool! The Duros were one of the first (if not the first) to explore the core worlds beyond their home planet, probably due to the fact that they can be seen wearing what appear to be space/flight suits in that Episode 4 scene.

18
How can Yoda identify Darth Bane?
5
Who created the character Darth Bane?
8
How did Darth Bane die?
2
Did Darth Bane have a plan for after the Republic was destroyed?
6
What race is being discussed here?
43
Are Chiss in Disney canon?
4
Why wasn't the Sy Bisti language programmed into any Republic or Imperial protocol droids?
11
Is Snoke a part of Operation: Cinder?