What were Saruman's most despicable deeds, and which is the worst?

"If that was so, it was a shameful deed; but not his (Saruman's) worst."

Unfinished Tales - Part III, The Third Age: The Disaster of the Gladden Fields

Saruman, in his 'fall from grace', did a lot of despicable stuff. In this quote, it seems to imply that one of his deeds were known as his worst.

I do know that Saruman was not originally evil, but upon being seduced by the One Ring he did many shameful deeds.

What are the most despicable of these deeds that he performed?

Saruman performed at least 5 shameful deeds, with 1 notably being his worst.

Here is a compilation of what is considered unadmirable deeds done by Saruman:

1. He found and burned Isildur's bones

This is a bit of a speculation addressed here. It was said (but not proven) that Saruman, in his lust-driven search for the One Ring, found out that Isildur perished somewhere near the Gladden Fields, and begin searching there.

When men considered this secret hoard more closely, they were dismayed. For it seemed to them that these things, and certainly the Elendilmir, could not have been found, unless they had been upon Isildur's body when he sank; but if that had been in deep water of strong flow they would in time have been swept far away. Therefore Isildur must have fallen not into the deep stream but into shallow water, no more than shoulder-high. Why then, though an Age had passed, were there no traces of his bones? Had Saruman found them, and scorned them - burned them with dishonour in one of his furnaces? If that were so, it was a shameful deed; but not his worst.

It was a terrible deed, seeing that Isildur was a man renowned for vanquishing Sauron in the Second Age, and that his bones deserved to be kept in a place of honor, instead of being reduced to ashes in a furnace. As said in the quote, this is not one of his worst deeds yet.

2. He was a traitor to his Order

And this the Valar did, desiring to amend the errors of old, especially that they had attempted to guard and seclude the Eldar by their own might and glory fully revealed; whereas now their emissaries were forbidden to reveal themselves in forms of majesty, or to seek to rule the wills of Men and Elves by open display of power, but coming in shapes weak and humble were bidden to advise and persuade Men and Elves to good, and to seek to unite in love and understanding all those whom Sauron, should he come again, would endeavor to dominate and corrupt.

Only Gandalf of the Five succeeded in the mission, but though Radagast 'betrayed' the purpose of the Order, Saruman betrayed the Order completely. He technically dominated the wills of his Uruk-hai and supposed 'ruffians' at Isengard.

Saruman turned from his original intent of saving Middle-earth from Sauron. In the Third Age Year 3018, he openly betrayed their cause and took for himself another name, Saruman of Many Colors, abandoning his mission and turning wholeheartedly and openly to evil (he was a traitor for some time before that, but nobody had realized it). 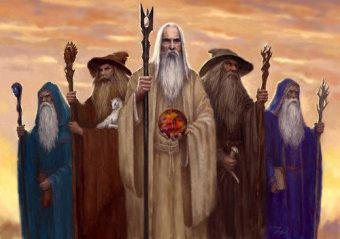 So, Saruman broke the 'seeking to control the wills of Men' rule and 'unite in love and understanding all those who Sauron would seek to corrupt'.

Saruman had injustly attacked Rohan, which he was supposed to aid. He was only allowed to abode at Isengard because Rohan had suffered heavy losses and Saruman's coming to Isengard would deter enemies from coming there (speculation).

In this way Saruman began to behave as a lord of Men; for at first he held Isengard as a lieutenant of the Steward and warden of the tower. But Fréaláf was as glad as Beren to have this so, and to know that Isengard was in the hands of a strong friend. A friend he long seemed, and maybe in the beginning he was one in truth. Though afterwards there was little doubt in men's minds that Saruman went to Isengard in hope to find the Stone still there, and with the purpose of building up a power of his own. Certainly, after the last White Council (2953) his designs towards Rohan, though he hid them, were evil.

This betrayal caused the two Battle of the Fords of Isen. Saruman also sent his servant Gríma Wormtongue to ail the King. Had Gandalf not interfered, the Muster of Rohan wouldn't have happened and Gondor would have been defeated.

4. (Further) Scouring of the Shire

Saruman, upon being scorned by the 4 hobbits on their way back to Rivendell, sought vengeance against them and their 'unspoiled' land. He did this despicable deed only for revenge.

'Who is this Sharkey?' said Merry. 'I heard one of the ruffians speak of him.'

'The biggest ruffian o' the lot, seemingly,' answered Cotton. 'It was about last harvest, end o' September maybe, that we first heard of him. We've never seen him, but he's up at Bag End; and he's the real Chief now, I guess. All the ruffians do what he says; and what he says is mostly: hack, burn, and ruin; and now it's come to killing. There's no longer even any bad sense in it. They cut down trees and let 'em lie, they burn houses and build no more.

In a bid to gain power and mastery over Middle-earth, Saruman 'blended' the race of Men and Orcs to create a superior race: The Uruk-hai (Orc-man) and Men-Orc(worse version of the squint-eyed southerners). He was able to make Orcs more resistant to the Sun, and make Men more evil and large.

So, amongst all of Saruman's evil deeds, which is his worst deed?

“And Curunír 'Lân, Saruman the White, fell from his high errand, and becoming proud and impatient and enamoured of power sought to have his own will by force, and to oust Sauron; but he was ensnared by that dark spirit, mightier than he.”

Worst is a strong word. Defined here as: 'of the poorest quality or the lowest standard; least good or desirable.' Saruman did many things, but the creation of Orc-men is seen as his worst is because he was duplicating Morgoth's (the first Dark Lord) actions. Saruman was originally sent to Middle-earth to oppose/hinder the actions of Sauron, the servant of Morgoth. Him repeating Morgoth's actions is completely unacceptable.

He, the White, leader of the Order of the Istari, a Maiar esteemed by Aulë, was behaving like the Dark Lord Morgoth for his own selfish benefit. Not because he committed treason and treachery, but because he rebelled against his creator Iluvatar. He took the gifts of the race of Men (e.g. able to abide sunlight) and gave it to Morgoth's foul creation: the Orcs.

He has taken up with foul folk, with the Orcs. Brm, hoom! Worse than that: he has been doing something to them; something dangerous. For these Isengarders are more like wicked Men. It is a mark of evil things that came in the Great Darkness that they cannot abide the Sun; but Saruman's Orcs can endure it, even if they hate it. I wonder what he has done? Are they Men he has ruined, or has he blended the races of Orcs and Men? That would be a black evil!'

Not the answer you're looking for? Browse other questions tagged tolkiens-legendarium saruman or ask your own question.

72
What's the worst thing anyone could do in a fast-food restaurant?
41
Where do Orc babies come from?
12
Why is breeding men and orcs considered evil?
12
What happened to Isildur's body?

12
Why is breeding men and orcs considered evil?
61
Why didn't Gandalf know what the Palantir was?
17
What were Saruman's original intentions, and how did they change over time?
14
How many Stars of Elendil were there, and what happened to each of them?
15
Do the dwarves know what a “hobbit” is?
20
How large were Saruman's and Sauron's armies?
12
What happened to Isildur's body?
18
Does Saruman invade Rohan to please Sauron, or is it a desperate last-ditch attempt to recover the ring?
13
When did Saruman discover Isildur's remains?