Who exactly was the squint-eyed southerner in the Lord of the Rings?

Who exactly is he? He is mentioned once in the Fellowship of the Ring as one of the instrumental characters who cause the Nazgûl to attack the Prancing Pony Inn at Bree.

Is he a servant of Sauron or Saruman? Clearly he helps the Nazgûl facilitate the attack by warning them, after Frodo accidentally uses the Ring. But, he is of ruffian origin- and aren't these ruffians under the command of Saruman? Pretty sure Saruman didn't want Sauron to find the Ring at the Shire, so why did this squint-eyed southerner help the Nazgûl?

'Like that friend of Bill Ferny's at Bree,' said Sam.

'Like many that I saw at Isengard,' muttered Merry.

What gives? Is he a double-crossing agent of Saruman or Sauron?

EDIT: Why does he appear in The Hobbit: The Desolation of Smaug movie, when that is set 60 years before the events of the Lord of the Rings?

The squint-eyed southerner was a servant of Saruman at Isengard. He is noted to have been evicted from Dunland and was one of Saruman's most trusted servants.

Some while ago one of Saruman's most trusted servants (yet a ruffianly fellow, an outlaw driven from Dunland, where many said that he had Orc-blood) had returned from the borders of the Shire, where he had been negotiating for the purpose of "leaf" and other supplies.

He is sent to the Shire as a spy for Saruman, but ends about getting captured and interrogated by the Witch-king whilst leaving the Shire. At that time the Nazgûl were searching for more information of the Shire, and the squint-eyed southerner acting as a spy working for Isengard.

At once he (Saruman) marshalled and set out into Eriador all the spies, spy-birds, and agents that he could muster.

The revelation of Saruman's lying to them here comes about through the man whom they captured and found to be bearing maps of the Shire; and more is told of this man and of Saruman's dealings with the Shire.

This Dunlending was overtaken by several of the Black Riders as they approached the Tharbad crossing. In an extremity of terror he was haled to the Witch-king and questioned. He saved his life by betraying Saruman.

He put therefore the Shadow of Fear on the Dunlending, and set him on to Bree as an agent. He was the squint-eyed southerner at the Inn.

To save his life he betrayed his former master Saruman. He then entered into the service of Mordor for fear of his life.

But some fugitives on the road they captured; and to the delight of the Captain two proved to be spies and servants of Saruman. One of them had been used much in the traffic between Isengard and the Shire, and though he had not himself been beyond the Southfarthing he had charts prepared by Saruman which clearly depicted and described the Shire. These the Nazgûl took, and then sent him on to Bree to continue spying; but warned him that he was now in the service of Mordor, and that if ever he tried to return to Isengard they would slay him with torture.

21 When Strider and the Hobbits left Bree Frodo caught a glimpse of the Dunlending ("a sallow face with sly, slanting eyes") in Bill Ferny's house on the outskirts of Bree, and thought: "He looks more than half like a goblin."

After being sent back to Bree now as an agent of Mordor, the squint-eyed southerner stayed at the Prancing Pony and witnessed the 'incident' with Frodo and the Ring. He slipped off to warn the Nazgûl; and therefore the Nazgûl came to attack the Inn at night.

But there was one swarthy Bree-lander, who stood looking at them with a knowing and half-mocking expression that made them feel very uncomfortable. Presently he slipped out of the door, followed by the squint-eyed southerner: the two had been whispering together a good deal during the evening. Harry the gatekeeper also went out just behind them.

The Lord of the Rings: The Fellowship of the Ring - Book I, Chapter IX: At the Sign of the Prancing Pony

This character never appears in the books, and the squint-eyed southerner's father isn't even known. This is just another of Peter Jackson's ways to link his Lord of the Rings and The Hobbit films together.

[...]. Matt grew up on the stories of Tolkien and George Lucas, and his role as Squint in 'The Desolation of Smaug' is his first major movie appearance. 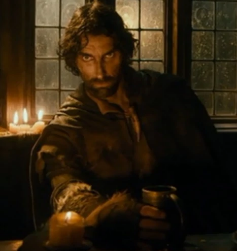 10
How was Isengard run before Saruman's creation of Uruk-Hai?
10
What is the backstory for these two men in The Hobbit?