Man broadcasting on the radio after an apocalypse

All I really recall is a man broadcasting on radio equipment after some form of apocalypse. The man was white and probably middle aged and the movie did not seem like a big budget production. I think it was mostly just the man in his safe place talking on the radio (there may have been flashback scenes and he may have been telling the story of how the world went to hell).

Something had happened to most of the population - I think it was some kind of alien hive mind taking them over or something in that general vein.

It was a live action movie in English, and I watched it within the last few years fairly certain its a relatively recent movie (within the decade at least) and it was in color.

story-identification movie post-apocalyptic
share | improve this question | |
edited May 14 '17 at 22:14

Not what the OP is looking for.

With the current details, I'm going to guess that the film is I Am Legend, starring Will Smith.

It is set after an airborne virus of sorts transforms most of the population to zombie-like creatures, that are afraid of sunlight (i.e. ultraviolet radiation). Naturally, the people who were immune to the virus (like the protagonist) were wiped out by the zombies.

Will Smith's character is a doctor who is working on finding a cure. He comes to a pierce, every day, and transmits a radio message on all frequencies, so other people may know there is one living person left. He also has a doggie.

The film was released in 2007, and it was based on the eponymous 1964 novel by Richard Matheson, though it differs from the book significantly (which was a major reason for criticism for the film).

The film had two endings: 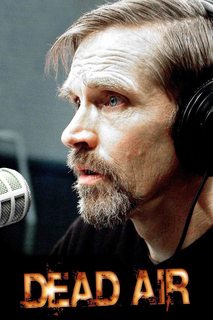 Logan Burnhardt is the ego-king of the airwaves, but his unflappable persona is put to the test when a terrorist bio-attack unleashes a plague of flesh-ripping maniacs on Los Angeles.

Steve's answer gave me an idea: could it have been Pontypool (2008)? Here's a summary:

When disc jockey Grant Mazzy reports to his basement radio station in the Canadian town of Pontypool, he thinks it’s just another day at work. But when he hears reports of a virus that turns people into zombies, Mazzy barricades himself in the radio booth and tries to figure out a way to warn his listeners about the virus and its unlikely mode of transmission.

A longer summary (with even more spoilers) is available at the Wikipedia page for the movie. Here's the trailer:

A clip from the movie is also available at the IMDB page. Similarities & differences:

It's a long shot, but this reminds me a bit of Panic in the Year Zero (1962), which starred Ray Milland (may have been his last film appearance). It was in color, Milland was around fifty-five when it was shot, and it ended with him talking on a shortwave transmitter, trying to contact other survivors.

There was a nuclear attack, and Milland hauled his family out of the city with a station wagon and travel trailer. In one scene, he talks to a shopkeeper about buying a gun, asks for a demonstration of how to load it, then turns it on the shopkeeper (doesn't shoot him, just steals the gun and several boxes of ammo).

10
can you identify a show about a man thawed from cryosleep to help future survivors of mankind?
6
Gory horror movie: mermaid trapped in a freak show, eventually kills her jailor
4
A 60s-70s movie where a woman crashes spaceship, later stalked and kidnapped by man
8
Prague golem as a robot - play on BBC Radio 4
16
Story about a man helping hell to reverse the apocalypse
4
Horror about a haunted blue Oni mask
7
Which 1970s Spider-Man cartoon had sentient alternate dimension plants?
9
TV episode where man changes the timeline, then comes home to Nazi America