I was originally going to ask, "Could Robocop swim?" but given that he is "titanium laminated with Kevlar" I don't think there is much chance of that1.

So if he was pushed into water, presumably he would drown pretty quickly just like anyone fully human, since his organic parts require oxygen. Is that right?

Seems like a pretty big weakness; in this iconic scene:

if the water had been a little deeper Robocop would have drowned, right?

1 Furthermore "He is also exceptionally heavy, when he was temporally disabled, it took over half a dozen officers to lift him off the ground."

During Murphy's transformation into Robocop in the original movie his organic form is almost totally replaced by machine, as overheard in a discussion between Bob Morton and one of the scientists:

Tyler: [while creating RoboCop] We were able to save the left arm.

Bob Morton: What? I thought we agreed on total body prosthesis. Now, lose the arm, okay?

It's never made clear exactly what constitutes "total body prosthesis", however we are told that Murphy's remaining organic systems require nutrition (by ingesting a nutrient paste). Whether they also require oxygen in the traditional manner (breathing) is not actually clear, Robocop doesn't appear to have blood or veins and arteries in the normal sense and so would be unlikely to need lungs to breathe with. His only external organic feature, his face, is flesh overlaid onto a metal base, apparently for cosmetic purposes. So it's possible that his organic parts are sustained without the need for breathing air and hence he could survive underwater for some undetermined amount of time.

That said, a (probably non-canon) Japanese "Making of Robocop" book published in the 1980s shows Robocop having an "emergency air supply capsule" in his left leg which implies he does need air after all. In that case he would be able to avoid drowning by consuming this emergency air supply, but could theoretically drown if it ran out while submerged.

EDIT: included a copy of the picture from the Japanese book: 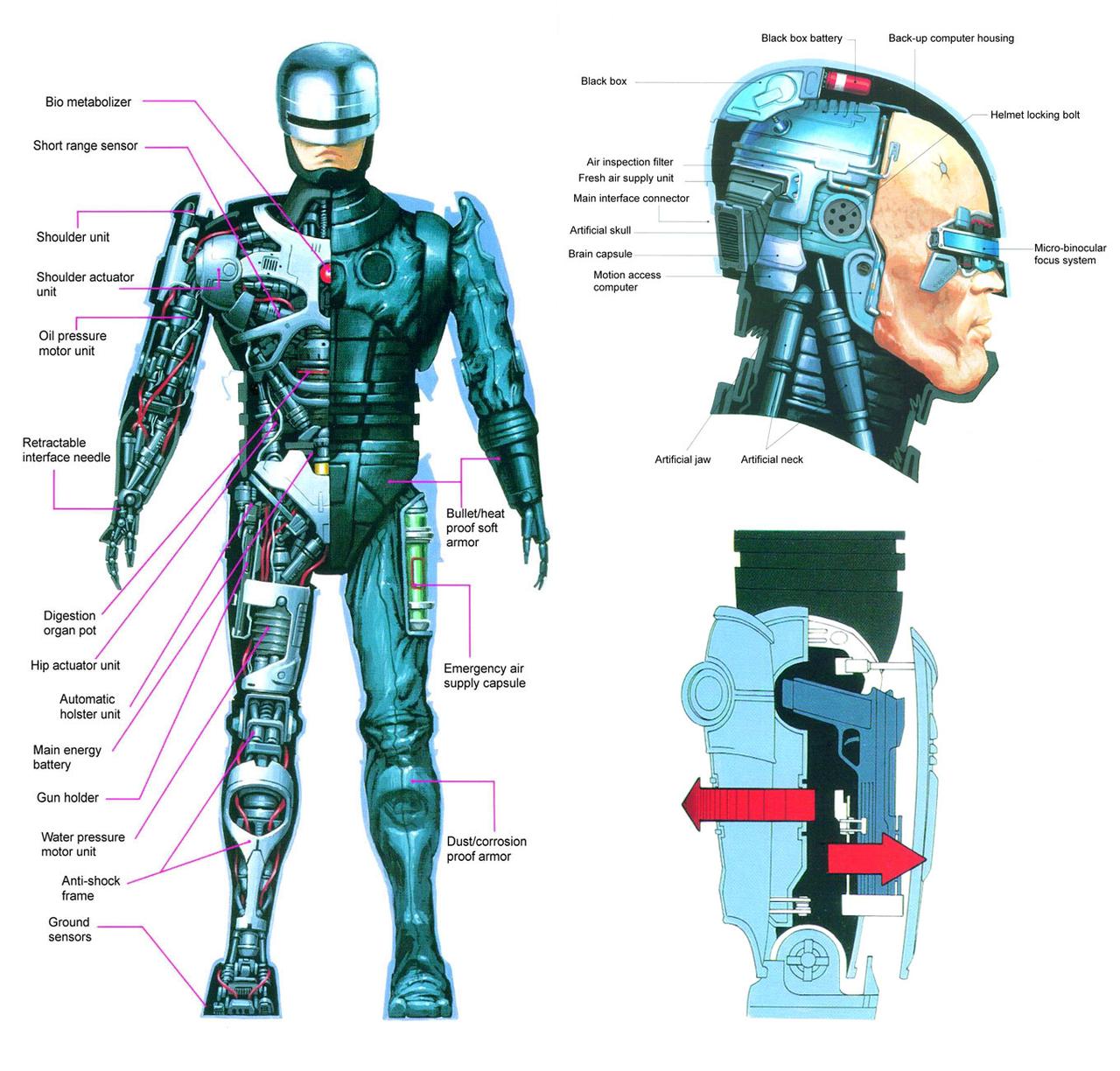 For most folks it isn't the lack of O2 that kills them (when drowning/asphyxiating) but the build-up of CO2. CO2 is produced in abundance by muscular and brain activity, but if you are only supplying the brain and some skin it's is proportionately even worse, since brain tissue is far more metabolically active than other soft tissues (2% of body weight, 20% metabolic activity). So Robocop's brain requires far more O2 than it seems, and produces much more CO2 than an equivalent scale whole body. So what he REALLY needs is a CO2 scrubber in his circulatory system, not just an O2 supply.

12
Did the general public know RoboCop was a cyborg?
19
Was Officer Lewis originally planned to become a RoboCop?
15
What's the 4th Prime Directive of RoboCop?
22
Is there an easter egg in the credits of Robocop?
33
When (in which year) is Robocop set?
13
Why did OCP build Robocop?
17
In Robocop, why was ED-209 loaded with live ammo during the demonstration?
7
How much would/did it cost to create Robocop?
20
How many human body parts are inside Robocop?