How does Ego's ship do this?

In Guardians of the Galaxy: Vol. 2,

Ego's egg-shaped ship appears and destroys the High Priestess' entire remaining fleet with what seems like a single energy burst.

How is Ego's ship able to do this?

tl;dr It wasn't really his ship that did it, it was him; given his 'God-Mode' powers.

Well, Ego is a supremely powerful being, he's actually a Celestial. In a sense Ego has "IDDQD" or 'God-Mode' abilities with a bit of "IDKFA" mixed-in. As he explains to the Guardians, it seems to just be a thing that he can do:

Gamora: You destroyed 1000 ships without even a suit, who can do that?
Ego: I'm what's known as a Celestial, sweetheart
Peter: Wait, a Celestial? As in a God?
Ego: With a small "g". At least on the days I have the modesty of Drax.
-Guardians of the Galaxy: Vol. 2. [paraphrased]

It seems to me that it's not really his ship that can do that, rather it's him. In fact, everything he has - his ship, his planet, his physical body - is in fact him, or rather a manifestation and extension of his self.

If you recall, in the scene where Ego destroys the Sovereign fleet, Ego is actually seen standing atop his ship, straddling it like some sort of steed, with harnesses and everything. It's not clear where the white blast type attack comes from, but his dialogue with Gamora seems to suggest that it was him that did the damage, not the ship.

In fact, in subsequent scenes, when Ego utilises his "power", he is seen doing so without any aides or weapons; as does

Peter, once he realises his potential too.

Skynet is the virus

Or rather, Ego is the ship.

This is where it gets tricky: Ego is based on the comics, however it is not a verbatim adaptation. Ego seems to have some extended abilities; namely his physical 'human-like' form and other extensions - such as his ship. Additionally, Ego from the movie is said to be a Celestial, whereas the comics version is not.

This is why, apart from the information we're given in the movie and any additional information given to us via the creators, it's not possible to give more insight about his ship or other abilities.

However, from what we can see, his ship:

Despite the appearance of a using a ship, Ego doesn't actually need one to move between worlds. Using the power primordial, Ego's abilities are limited only by his imagination.

His starship is nothing more than camouflage, a pretense he creates to make people underestimate him and treat him as just another humanoid moving around the Universe.

With his cosmic powers, Ego is not limited to using warp gates, jump systems or any other such technology used by the Ravagers, Kree or the Xandarians. Using his own power primordial, he could easily overcome every aspect of the Sovereign technology with no true effort on his part.

Ego does not deign to use such constructions such as starships, even though he is capable of doing so. When he meets Thor for the first time, he reveals his capacity to create organic constructs which resemble Asgardians seconds after meeting the thunder god. As a rule, Ego is inclined to simply fly his moon-sized body to wherever he wants to be and then do whatever he likes once he arrives there. 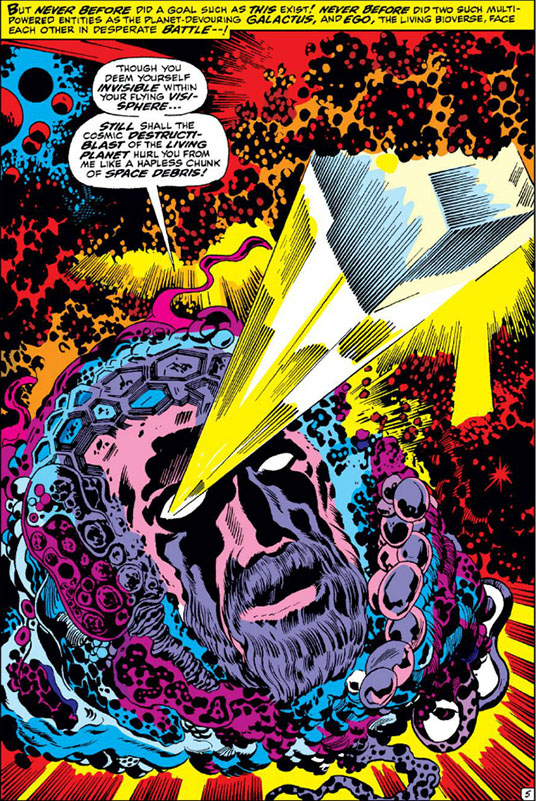 12
How does long-distance space travel work in the MCU?
24
Why did Ego's human form age normally?
14
Did anyone else transport Ego's children?
1
How is Gamora this strong?
3
Were Ego's dioramas in Guardians of the Galaxy Vol. 2 a shot at EPCOT?
2
How big is Ego's brain?
13
Did Thanos use the full power of the Power Stone to punch Captain Marvel in "Avengers: Endgame"?