Post apocalyptic alien commune, released within the past 10 years, with low budget

It was a movie I watched about a year and a half ago. It couldn't have been too old, maybe the past 5 years or so. It was a lower budget film about a compound in the desert (I think Nevada) where this community of humans lived ruled by a big CGI purple tentacled alien. The alien would have a ceremony when the kids came of age, and lay a parasite egg inside them. This movie was freaky y'all. Anyways I remember the alien having a telepathic link with the boy after the alien "insertion" scene, but he ended up rejecting the parasite during the ceremony. I remembered they called humans having sex "war" and the aliens would murder the mothers if they got pregnant. I also remember a scene with the kids' parents where they all go to the garden to die, and then their faces grow out of the ground. It's a big reveal later on in the movie.

Sorry, strange movie I know. I just can't find anything about it. The cover has a kid in his underwear with a gas mask on it.

story-identification movie
Share
Improve this question
edited May 13 '18 at 0:01

This is Exile (AKA The Sunderland Experiment) from 2014.

Raised in isolation, the children of [desert town] Sunderland face an all-consuming choice. They can attend school to learn the teachings of the Angel and "evolve" like their parents, or they can fall; living their lives in the wasteland at the edge of the community where their small rebellions are tolerated as long as they remain within the confines of Sunderland. Like some of the other children David has already decided to fall when the time comes, but he has his own reasons.

The 'Angel' is a tentacled alien that impregnates them, creating a psychic link between them. And a review elaborates:

The bizarre life cycle of the alien apparently requires nearly a decade of gestation inside its host - the film occurs at the end of this period for the first adults to be "blessed" by the psychic, parasitic organism, at which point they have to plant their heads in the garden, to produce the next vegetative part of this life cycle.

You can see the trailer here and here's the poster you described, with the boy in his underwear wearing a gas mask in the desert (and grabbed by tentacles): 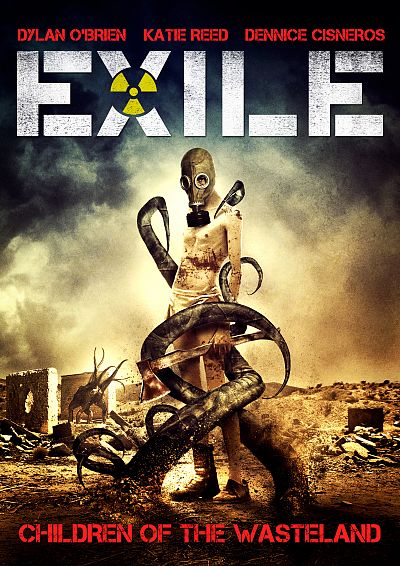 8
Movie about a mysterious girl who turns out to be an alien
7
Post Apocalyptic Series With Alien Species
5
Low-budget film with an amnesiac woman on a spaceship turning evil
13
Looking for a sci-fi movie in which a human astronaut befriends an alien on a reddish planet
4
Low Budget Science Fiction Movie involving an alien laser weapon and a dead dog
16
Chinese-language movie about an alien boy with the ability to grant wishes
12
Low budget D-list movie with werewolf, emo guy, and mystical girl of his dreams
12
Low budget alien movie about the Earth being cooked
2
post apocalyptic movie with eagle-helmet
4
Movie (“The Host”?) with alien overtaking human bodies and “solving” the problems of human society