Who are these people on the cover of Knife of Dreams?

I recently read the 11th book of the Wheel of Time series, Knife of Dreams. As is often the case, I'm curious who the people on the cover are, and what's going on.

Here's the artwork used for the front and back cover: 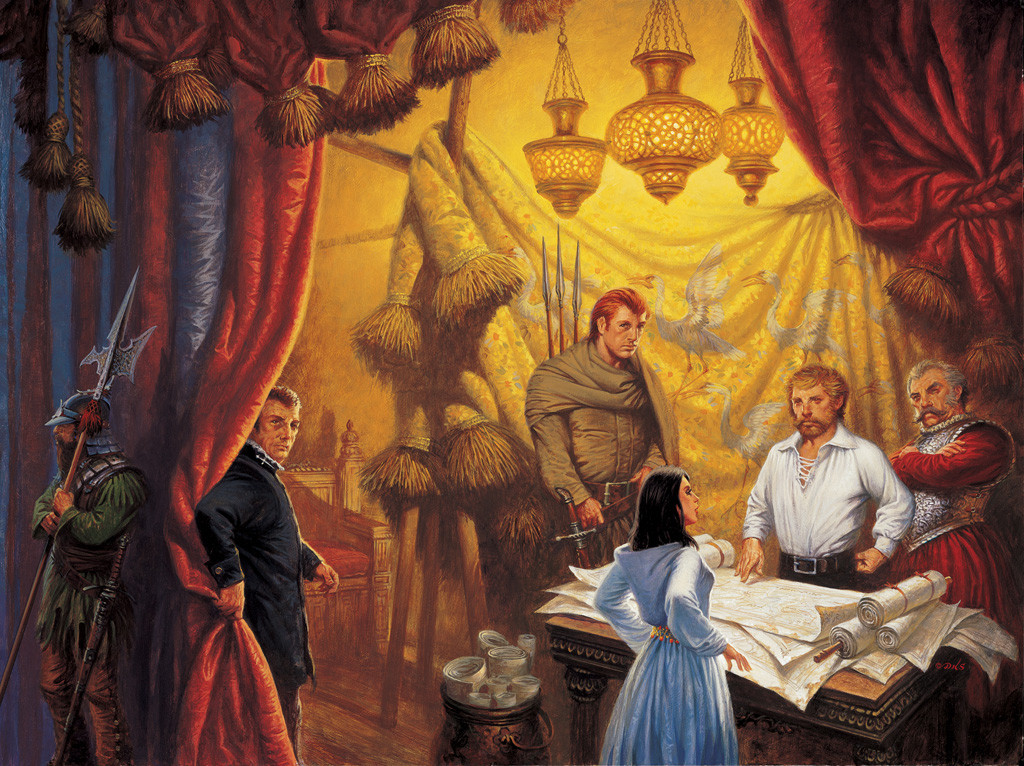 What's going on here, and who are these people?

Unlike a lot of book covers that are just loosely based on a general idea of what happens in the book, this is a specific scene from the book's prologue.

In general, this is Galina talking to Perrin in his camp. They're discussing the Shaido at Malden.

This is Perrin's tent, in his camp near Malden.

In the prologue, Galina is captured by Gaul and Neald. She is taken to Perrin's tent in his camp. The description starts on page 73:

The interior of the tent is then described:

there was a good flowered carpet for a floor here, and two silk hangings embroidered with flowers and birds in a Cairhienin fashion hung from the roof poles

The woman standing in front of the table is Galina.

In the scene identified above, Galina enters the tent, and discusses a table covered in maps with Perrin. Her clothes are described earlier, when she is captured:

the thick white silk robe ... and her firedrop-studded belt and collar

Her robe looks a little blue in the lighting, but it's close enough to white. You can see her studded belt.

The man standing across the table from Galina is Perrin.

He is described from Galina's perspective when she enters the tent:

a tall, broad-shouldered man in his shirtsleeves ... silk shirt and well-polished boots ... his golden eyes froze her tongue

You can't tell really well from the picture here, but from looking at the actual book in my hands I can see that he has yellow eyes.

The huge guy on the left is Gaul.

Gaul is described when Galina is captured in the woods:

I would certainly describe the man in the picture as "very tall". The clothes he's wearing look like cadin'sor to me, and you can see the spears on his back.

The man on the right in a breastplate is Gerard Arganda.

This whole scene is described from Galina's perspective, and she doesn't know who Arganda is, so he is referred to as simply "the Ghealdanin".

The man in the scene is described like so:

a graying, hard-bitten man in an ornate breastplate worn over a scarlet coat. A Ghealdanin, Galina thought

That all matches well.

We know from previous books and other scenes in this one that the senior Ghealdanin military man with Perrin is Arganda.

The man in black near the tent entrance is Jur Grady.

He's clearly an Asha'man, with his black coat and his sword pin on his collar. There are two Asha'man in this scene, Fager Neald and Jur Grady. Neald helped capture Galina, but Grady is in the tent with Perrin when Galina enters.

in a black coat, a stocky, weathered fellow with a silver pin in the shape of a sword fastened to his high collar

To determine which of the two Asha'man we're looking at, I checked the descriptions of their appearances on the Wheel of Time wiki.

He has a tiny mustache which is waxed to form points.

Although only a few years older than Rand al'Thor, Grady is already starting to show wrinkles. He is stocky and looks like a farmer and has dark eyes.

That man has no mustache, so I conclude that it is Jur Grady.

The guard outside the tent is not mentioned in the book. It may be possible to determine which military group he belongs to based on his uniform, but I haven't been able to find that information in an easily accessible place to check.

I'm guessing that it's one of Perrin's men from the Two Rivers, based on the quality of his garments.

Not the answer you're looking for? Browse other questions tagged character-identification the-wheel-of-time cover-art or ask your own question.

12
Can an Aes Sedai use the One Power as a Weapon on a Darkfriend?
18
Who are these Bat-family members?
10
Who are these two people from the Avengers: Age of Ultron trailer?
10
Horn of Valere - why are people still searching?
54
Who are these Lego superheroes?
3
Who are the Whitecloaks and whose side are they on?
7
Why are there cover art variations in the Plume trade paperback edition of The Waste Lands?
9
Looking for supernatural romance novel about woman at mental institution with mysterious power, has variation of “witch” in title
8
Who are these people on the cover of Crossroads of Twilight?