Show that I watched on Cartoon Network, about teenagers who could transform to monsters

What I remember about the show is that some teenagers (3, I think) were some kind of monks that were able to transform through a device (I don't think that it was a power they were born with) into multiple monsters and could transfer monsters from each other.

The cartoon was in English but, I watched the cartoon about 5 years ago but I think that it aired later in my country and I can't remember if it was airing for the first time or not.

Could this be Xaolin Showdown?

Four young monks – Omi, Kimiko, Raimundo, and Clay – are forced into cooperation at the Xiaolin Temple after learning they are chosen to become Xiaolin Dragons. They become friends and work together traveling the world in search for Shen Gong Wu, mystical objects with powers that balance the forces of good and evil. Along the way, they must battle wannabe evil boy genius Jack Spicer, and the evil Heylin sorceress Wuya, whom Jack inadvertently frees from a 1500-year imprisonment in a puzzle box by Grand Master Dashi. Through thievery, Spicer ultimately possesses enough Shen Gong Wu to form Mala Mala Jong, an ancient monster that Wuya uses to help her gain control of the world. Raimundo defies orders and fights the monster, causing the remaining monks to fight and defend the remaining Shen Gong Wu in the Temple's possession. All the monks, except for Raimundo because of his reckless disobedience, are promoted to Xiaolin Apprentices due to their bravery. Angered, Raimundo joins the Heylin side and helps Wuya regain her human form

Is it Redakai: Conquer the Kairu? It is almost exactly the same as what you described. The main characters fight with magic and can transform into monsters using cards. 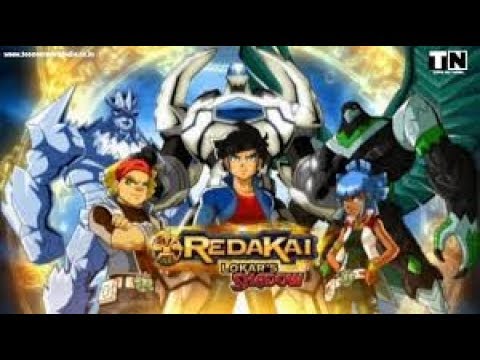