We can gather from Attack of the Clones that Padme wanted kids:

PADMÉ: Popular rule is not democracy, Ani. It gives the people what they want, not what they need. And, truthfully, I was relieved when my two terms were up. So were my parents. They worried about me during the blockade and couldn't wait for it all to be over. Actually, I was hoping to have a family by now... My sisters have the most amazing, wonderful kids... So when the Queen asked me to serve as Senator, I couldn't refuse her.

And from Revenge of the Sith, Anakin appears supportive of the pregnancy--even though it could get him kicked out of the Order--but doesn't go into whether or not he wanted it before:

PADME: Anakin, this baby will change our lives. I doubt the Queen will continue to allow me to serve in the Senate, and if the Council discovers you are the father, you will be expelled from the Jedi Order.

We also know that he has familial issues since his mom was killed, but that extent is never explained in the films.

Is there anything that talks about Anakin's desire to have a family before the events of ROTS?

Yes, he wanted kids because he openly showed happiness when Padme reveled she was pregnant.

Padmé Amidala: What are we gonna do?

Anakin Skywalker: We're not gonna worry about anything right now. All right? This is a happy moment. The happiest moment of my life.
Star Wars: Episode III – Revenge of the Sith (2005) 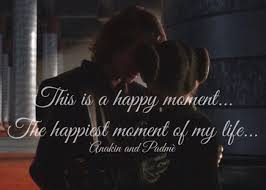 Anakin: Born in harsh environment as a slave-boy, never had a father, taken from his mother very young, basically an orphan. Introduced to Jedi Order who looked at him as some kind of prodigy, becomes essentially child-solider put in mortal danger all the time. Subconsciously looking for home, for a father and mother figure. His teacher Obi-Wan is too young and unwilling to become said father-figure, he is more of older brother ("You were my brother, Anakin") , somewhat unhealthy rivalry develops between them. Steps in Palpatine, and rest is history. As for mother figure, Anakin falls for significantly older and more mature girl (Oedipus complex anyone :P ) . He wants to protect her, but often lets her steer him in life, something mother should do.

Padme: Promoted beyond her ability. Considers herself as part of "enlightened elite" (Popular rule is not democracy, Annie. It gives the people what they want, not what they need.) with duty to rule. Also, considers herself smart, although her cognitive abilities are average, and she is unwilling but useful pawn in Palpatine's game. Yet, she is far more cunning than Anakin. She is attracted to him because he undoubtedly has power, yet remains naive little boy in his heart, someone she could control and manipulate, therefore building her own self-esteem .

Therefore, does Anakin want children ? Anakin is undoubtedly less experienced in sexual matters then Padme, she is his first real girlfriend, while on other hand Padme had other boyfriends (we know of two : Palo Jemabie and Rush Clovis). Considering, as shown above, that she controlled their relationship, it is almost sure that she controlled question of contraception. Therefore, it was her decision to conceive a child, maybe as a sort of insurance to keep Anakin close to her. Anakin was put before fait accompli, he was confused but then accepted the fact. He let things slide as usual in their marriage, Padme making important decisions for both of them . Therefore, answer to our question would be that he probably didn't consciously want to have kids right now, be he was not against that idea either. He just accepted matter at hands.

Not the answer you're looking for? Browse other questions tagged star-wars star-wars-legends anakin-skywalker or ask your own question.

15
When did Anakin stop being a Padawan?
41
How does taking-a-Force-sensitive-youngling-to-the-Jedi-Temple go down?
11
When did Vader “kill” Anakin?
19
If Queen Amidala had signed the treaty, would the Republic Senate recognize it as legitimate?
65
Why did the Jedi serve a corrupt Republic?
11
How many lightsabers did Anakin lose?
8
Was Padmé an unwitting and unwilling pawn of Palpatine?
7
How did Anakin Skywalker learn Force Choke?