What short story had a man who taught himself to see with his fingers?

When I was a kid (around 1981), I once read a short story where the main character gradually taught himself to see with his fingers. He used this skill to read books without looking at them (by seeing the text, not feeling it). And he may have used it for other things, I'm not sure. He was excited about this new skill/talent at first, but somehow it came back to haunt him in some way (the story had quite a dark mood by the end).

I have it stuck in my head that this story was by Roald Dahl (or possibly Rudyard Kipling, I used to get them a little crossed), but I haven't been able to find anything like this by him. At any rate, I think it was by someone who was generally known for lighter fare.

I'm pretty sure it was a short story, not a novel.

story-identification short-stories
Share
Improve this question
asked May 19 '17 at 5:09 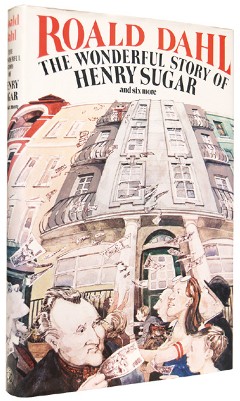 This story was indeed written by Roald Dahl. According to the Wikipedia description:

Henry, an independently wealthy man who enjoys gambling, finds and reads a doctor’s report on a strange patient the doctor met while stationed at a hospital in India. This patient, who called himself “The Man Who Sees Without Using His Eyes”, had the ability to see even after the doctors had medically sealed the man’s eyes shut and bandaged his head. The man was part of a circus act and used his ability to make money. When interviewed in more detail by the curious doctors he gave an account which they wrote up. The man claimed he had been interested in magic all his life, and managed to study with Yogi Fakeirs in India, by which he develops the ability to see through thin objects such a paper or playing cards, and can see around solid objects such as a wooden door if he is allowed a finger or hand around it. The doctors decide the man could be of great benefit as a teacher of the blind, and return to the circus, only to find the show cancelled, when the Man Who Sees Without Using His Eyes has died.

He can see things with, say, a finger:

"Quite honestly, I don’t know exactly how it is I can see without my eyes. But what I do know is this; when my eyes are bandaged, I am not using the eyes at all. The seeing is done by another part of my body."

"Any part at all so long as the skin is bare. For example, if you put a sheet of metal in front of me and put a book behind the metal, I cannot read the book. But if you allow me to put my hand around the sheet of metal so that the hand is seeing the book, then I can read it."

There is a dark twist at the end; however, it never happened. Dahl is simply saying what would happen "if the story were fiction":

At first, the clot seems to be stationary. Then it moves. The movement is very slight, no more than a millimetre or two. The blood inside the vein is pumping up behind the clot and pushing past it and the clot moves again. It jerks forward about half an inch. This time, up the vein, towards the heart. Henry watches in terror. He knows, as almost everyone else in the world knows, that a blood-clot which has broken free and is travelling in a vein will ultimately reach the heart. If the clot is a large one, it will stick in the heart and you will probably die. . ..

That wouldn’t be such a bad ending for a work of fiction, but this story is not fiction. It is true. The only untrue things about it are Henry’s name and the name of the gambling casino. Henry’s name was not Henry Sugar. His name has to be protected. It still must be protected. And for obvious reasons, one cannot call the casino by its real name. Apart from that, it is a true story.

4
What was the story about a man with an eye on his tongue/finger?
13
Man hit by a vehicle, wakes up in hell but thinks he’s in heaven
7
Short story: aliens with easy FTL travel but flintlock-type weapons
8
Trying to remember a Fantasy book/short story I read about powerful maybe enslaved humans with 6 fingers
9
Short story about a doctor who can hook up his pain center to patients'
9
Short story or novella about a man who remembers everything
17
Short story with death sentences for patent infringements and a sadistic judge