Fantasy book - Woman from our world winds up in a fantasy world, meets chosen one, beats him in singing contest and wins cup

This one is teasing me. I read it somewhere in the mid 1990s, I think, between 1992 and 1998 (somewhere in that middle to high school era). It was in English. The main character was a woman (I think a redhead) from our world who winds up in a fantasy world. One of the first people she meets is a man with a staff (I think also a redhead) who is traveling to an important contest that involves singing (he was chosen and trained for it by his village, I think). He treats her with the patronizing air one might expect from a medieval fantasy society. She sets him in his place, I believe toppling him with a self defense throw at one point to show him she could take care of herself. She winds up traveling with him, I think also with a bunch of homeless kids (called the "Littles"?) and enters the contest with him.

She winds up winning, I think with "Simple Gifts" and gets a magic cup as her prize. She uses said cup as a cup, including filling it with the local intoxicating beverage, which I remember being describing as dark and thick. Drinking it from the magic cup results in her having a vivid dream, or maybe a hallucination. At the time, it reminded me of the scenes in Labyrinth and in Legend where characters semi-hallucinate a dancing scene, but I don't remember if it actually involved dancing. When she wakes up the next morning, she finds out her male companion has attached himself to her, essentially to protect the cup more than her, as he thinks she isn't taking this seriously (and really, she isn't). Also, the "Littles" get in trouble with the law for sleeping together. The female protagonist insists that they all sleep in a big pile together and it's totally innocent, but it's then clarified that they were caught having sex.

I'm pretty sure this one will come to me eventually, but it's just not coalescing in my head, and my Google searches have not done me much good either.

I believe this is Cup of Clay, first book of the Taliswoman series by Carole Nelson Douglas. This review mentions many of the points I remember:

A Minnesota newspaper reporter suddenly finds herself in the devastated world of Veil, where water is frequently poisonous and children are cast out because of mutations (or birth-banes) in this ecologically oriented fantasy. Alison Carver rescues five ragged, feral children, who call themselves the Littlelost, from a band of depraved miners. Soon afterward, she encounters a young man named Rowan, who informs her that Veil is a world of magic that has fallen on hard times because the earth has been poisoned. Rowan is on his way to a music competition to contend for the Cup of Earth, which has properties that can restore his blighted land of Desmeyne. When Alison enters the contest and wins the cup, Rowan is devastated, particularly when she reveals she is a woman; in sexist Veil females are highly sheltered and considered intellectually inferior. Although Alison agrees to use the powers of the Cup to aid Desmeyne, many barriers remain, including the prejudice of Rowan's people against Alison and the Littlelost. A spirited heroine, Alison aids the hero in his first quest and then bows out--for the time being only, one presumes, since this is the first of a projected trilogy by Douglas 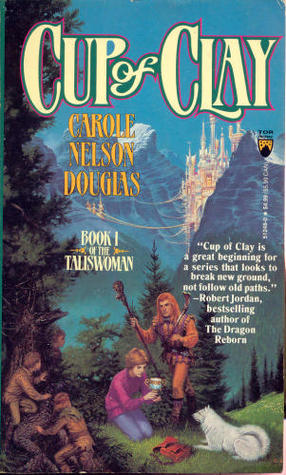 The book cover supports my memory of them both being redheads.

7
Help find a novel with a female heroine from, at latest 1990 in a two part novel?
5
searching for fantasy series: assassin (?), ship, fated lovers, sound of drums, and shapeshifter (?)
8
Fantasy book with a brother-sister pair in a besieged castle. Girl can shapeshift. Boy gets turned into a sword
7
Fantasy comedy romance novel, set in medieval times, involving a siege, a nun, and enchanted pickles
5
Paperback novel where a female kendōka kills an opponent because her sword is magically replaced, then she is transported to another world
5
Fantasy novel (series?) involving hibernating dragons who are harvested and a woman in a loveless marriage because her husband is secretly gay
4
Science Fiction / Fantasy book involving a young woman hired to read Tarot cards for a local lord, ends with her killing his brother for him
14
Very Goth film, secret order of monster hunters, girl takes cup out of picture