Trying to find an old book about a "multiple-personality" boy

I read it in Spanish, at least 10 years ago in the school library.
I remember it was set in some medieval age with barbarians. The "persons" in his mind could argue with each other and with the "host" boy / man, about his decisions and life, and sometimes one could go up and control him and then he had some kind of power.

I barely remember also the end of the book, so spoiler alert now:

All of these "personalities" were a mirror image of his pals from his childhood village, that were massacred in front of him. At the end, he was separated from them because of some kind of cure.

story-identification books
Share
Improve this question
edited May 19 '17 at 17:54

I'm going to suggest The Outcast, book one of the Tribe of One series set in the TSR Dark Sun universe. 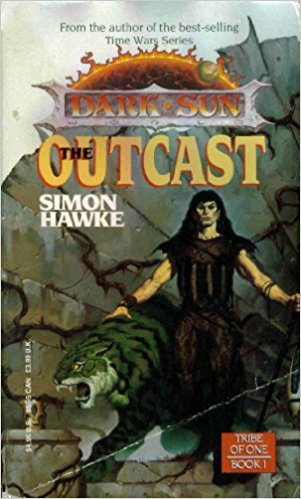 Hawke's ``Tribe of One'' trilogy opens with the youth and early adventures of Sorak, who is part elf and part halfling; he possesses psionic (mind-reading) talent as well multiple personalities, the latter the result of early childhood trauma. Found abandoned in the desert, Sorak is raised by benevolent villichi, or psionic human priestesses, who have educated him in the responsible use of magic. Athas, his home, is a dying planet whose resources have been ruthlessly exploited by sorcerer-kings, but there is a belief that a savior is coming. Armed with two gifts from the priestesses--an ancient elvish sword called Galdra and the Wanderer's Journal, stocked with information on people and places--he leaves the villichi temple to learn about himself and his past. Sorak's quest becomes a search for the savior and takes him to Tyr, a city rife with political intrigue where one can contact the Veiled Alliance, a secret group opposed to the sorcerer-kings and who receive messages from the savior. Hawke ( The Reluctant Sorcerer ) more than intimates that Sorak himself is the long-awaited savior. His yarn offers fans of the fantasy genre some interesting themes to ponder.

Sorak is certainly one of the most unique and interesting character I’ve ever read about in any of the D&D novels. The offspring of an Elf and a Halfling, he is abandoned and left to die in the desert when he is about 5-years-old. Hearing his psychic cries for help, a Pyreen – a Druid-like elder – hears his wails and helps him. She finds Sorak abandoned by all by a tigone, a psychic tiger cub that has bonded with him. Sensing his unusually powerful psychic powers, she bring him to a monastery run by the benevolent villichi, a sect generally reserved for women, and asks that they raise him. Sorak is taught to use his body and mind to their fullest potential.

Besides being an extremely powerful psychic and gifted weapons fighter, Sorak is a Tribe of One. Because of the trauma he faced as an infant, his mind has shattered into multiple personas. Each persona represents different aspects of Soark’s personality. One wields powerful psychic powers, one is a tracker and hunter, one is his curiosity, one loves animals, and one is his five senses. By the end of this book we’re introduced to at least ten distinct personalities sharing Sorak’s mind and body. Same have names and some are only identified by their purpose.

5
Book with sword fighter with multiple personalities, trying to protect someone from people who have come to his village

9
Young adult fantasy trilogy with a large symbol and coloured background
11
Book about accidental time travel using a mirror to ancient Egypt
7
Child's picture book; fantasy story with a green lizard in human clothes
9
YA novel about characters in a fantasy novel who must fight to prevent the text of the novel itself from being corrupted
7
Looking for an old-old sci-fi tale about time-traveling
6
Short horror story set in a pawn shop, mirror with dark history/ties to dark magic is involved