Story ID - The Dragon in the Well

Written before 1995 in all likelihood; certainly before 2000. The cover may have depicted a painting of a dragon on a wall, but I am not certain.

The story, as best I can recall, is that there are a boy and a girl; the boy is ill-tempered and a trouble-maker. Very early in the story they visit an old (possibly Chinese) man's house, who has a painting of a dragon on his wall. The boy has a dart with him which he throws at the painting, piercing the dragon's wing. This causes a disturbance of some sort; it turns out that the painting is somehow connected to an actual dragon living in the man's well, and now that dragon has a hole in its wing.

In order to make amends, the children are to release the old man's familiar good luck spirit, or something like that, which is trapped in a star which fell to earth some time ago. They have to do some specific sequence of steps - by moonlight, if I recall correctly - but they botch the job somehow and the spirit goes wild and flies away.

They have to pursue it by riding the dragon, which has yet to fully heal; due to its injury, it ends up falling into the ocean and they all wash up on an island somewhere; the dragon, as a result of being exposed to the salt in the ocean, has shrunk down to the size of a lizard and spends some time recuperating in a stream or a river.

My recollection of the story after this point is very vague, but I remember something about them flying through what appear to be clouds but are actually some kind of numbing substance which paralyzes them, and later encountering the spirit, which by this point has calmed down so they can talk to it.

This is The One-Winged Dragon by Catherine Anthony Clark. It was written in the 1950s.

This review on Goodreads mentions an injured dragon living in a well.

A young boy makes friends with a local Chinese gardener who just happens to have an Imperial Dragon living in his well. The dragon manages to take the boy and his young female neighbour on a series of adventures meeting with a First Nations band and living with them on a isolated island off the coast of BC Canada. They end up in the Arctic facing a evil witch and even more exciting events. 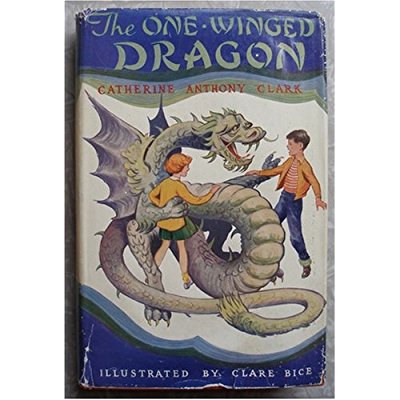 Not the answer you're looking for? Browse other questions tagged story-identification novel magic dragons or ask your own question.

17
Book about Dragons Ending (Turning to stone)
13
Space Dragon Book?
5
Children's book about a dragon who could not breathe fire
11
Juvenile/youth fantasy short story about a book with a dragon that emerges to eat the owner(s)?
3
YA book series about a teenage dragon
6
Short story from 1988: Boy and soldier walk together to wall, are ignored on the way
9
Short story about military airships and a dragon corps