Origin of old drawings (before 1995) of “Defrog” space-craft

Recently I went though the content of an old hard-disk I found in the attic.
Disk wasn't used since 1995...

On it I found a collection (some 60 images in GIF format) depicting floor-plans of various models of space-craft all labeled as "Defrog ship-model".
E.g "Defrog ligth cruiser", "Defrog log-range scout", "Defrog Assault Troop carrier", etc.
Most of the ships where military. A few cargo vessels with limited passenger capacity. And a diplomatic shuttle-craft that also had a passenger cabin.
All descriptive text in the drawings was in English.
There were only floor-plans, showing the deck-layouts and included basic furniture like beds, chairs, tables. From the furniture and the layout of bathrooms, etc. it was clearly all designed for humans. Or very humanoid aliens.

It all looked quite interesting but I have not been able to find any more references to "Defrog" anywhere.

Unfortunately I can't provide a sample picture. That hard-disk died on me while I was trying to retrieve the content. No surprise as the disk was about 30 years old.

I must have downloaded these images from a BBS, a FTP site or USENET group between 1988 and 1995. I can be fairly certain about that time-frame because I can recall I bought the computer with this hard-disk in 1988 and I replaced it in 1995.

Does "Defrog" ring a bell for anyone? I would like to know more about these ships.

PS. On request of Valorum I added a rough sketch drawn from memory to give you an idea what these floor-plans looked like. Background was white, outlines, hull, walls in black. Furniture in blue and green (this varied). For some ships having multiple decks 2 or 3 decks where displayed in one image. Or for some others each deck had his own image. All images had a small legend bottom-left. 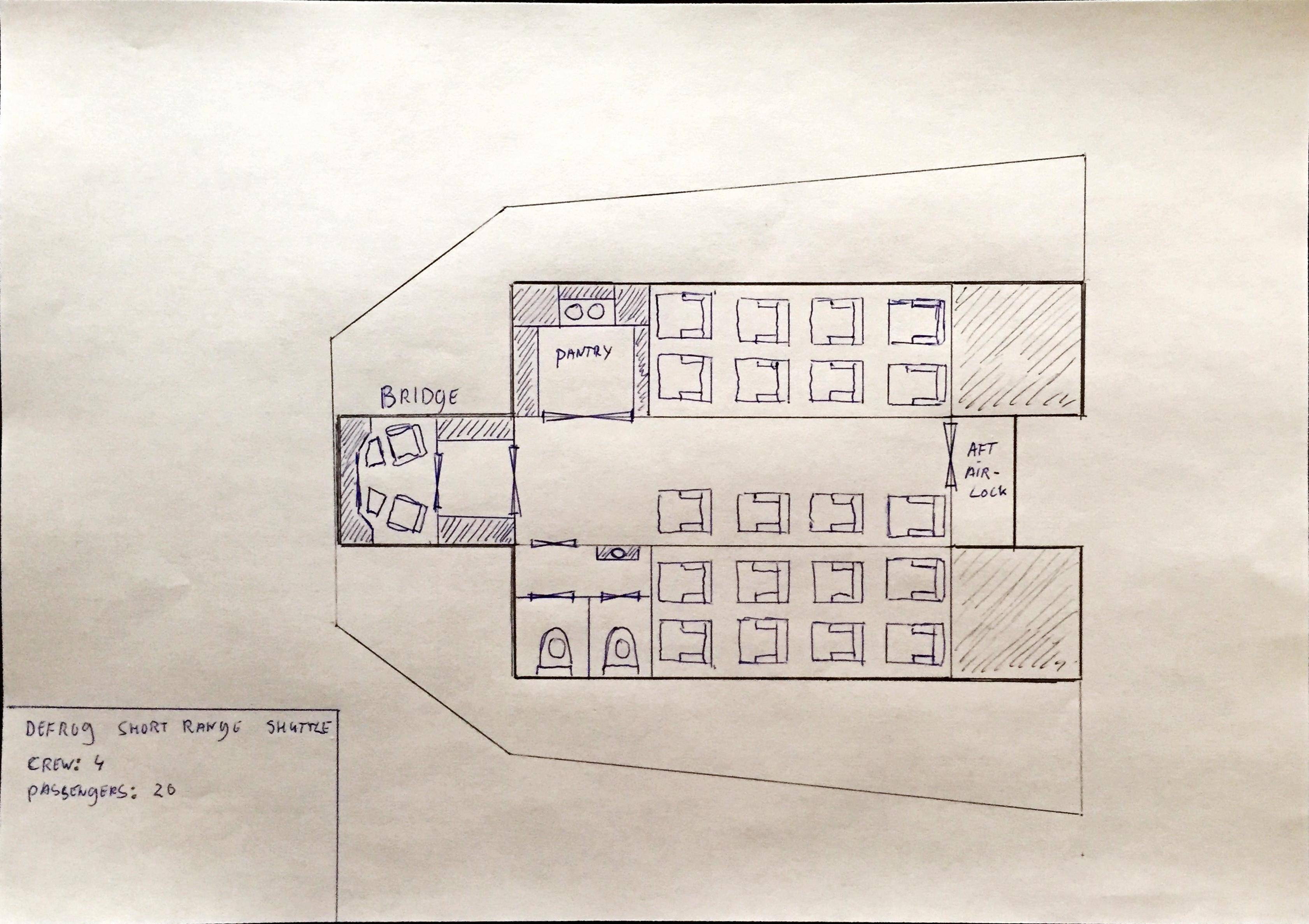 Forgive me my lousy drawing skills!

It could be something from this long-defunct website, which looks like it was related to an RPG of some sort:

I'm adding a self-answer to further explain and to thank Nathan, Winchell Chung and Starpilotsix. Their combined efforts, together with input of my mate Steven who used to play these RPG's back in the day, gave me the full story.

Over the years there have been a lot of table-top RPG games (official ones and home-brew) set in the StarWars universe.
Many of those games were derivatives (to a greater or lesser degree) of the Traveller RPG and have a great deal of similarity to that in terms of game-materials like maps, drawings and such. In many cases this material is interchangeable between the various games.

The exact origin of "Defrog Stardrives Inc." is not clear. Most likely it was originally devised by a GM as a ready to use background setting for one of those games at some time in the early 1990's.

The space-ship drawings and plans got circulated on BBS boards and the internet. Over time many variants and additions came into existence. Later a variant of these also got official status (maybe a content-pack for one the games)? The www.defrog.com web-site (2002) was most likely related to that. Around the same time also a Yahoo group was formed, tied to that web-site.

As for the files I found on my own old hard-disk...
My mate Steven told me he had most likely pulled them from a BBS or newsgroup himself using my computer back in 1994, when he was several months out of internet/bbs connectivity of his own.
(It was still dial-up back then and his new house, in the country-side, didn't have a land-line at first.)
I recall letting him use my computer, but I didn't really care what he downloaded as long as the dailup-charges stayed reasonable.

Not the answer you're looking for? Browse other questions tagged spaceship or ask your own question.

6
Short story - 4 or so people in a simulated space craft
5
First instance of the flying saucer as a space craft?
1
What's the difference between how space and atmospheric craft (eg. fighters) work?
9
Old SF story about the need to destroy an out-of-control passenger ship with a nuke before it crashes?
10
(Recent?) book or series? - Young woman pilot wins old space freighter in a gambling game
15
Space craft takes group of people to various planets which turn out to be from their imaginations or books they have read
8
Old Space movie about 1980-1999
3
What is the origin of the visually complex space ship motif in cover art?