What does the city name Ankh-Morpork in Terry Pratchett's Discworld novels mean?

I would assume that someone has asked this question before but I haven't found any discussion about the name of Ankh-Morpork. Ever since I read my first Discworld book, I kept wondering about this name. I am not a native speaker, so I wonder if I miss any pun or reference to the real world?

There's a discussion of this in The Annotated Pratchett.

Terry has said that the name 'Ankh-Morpork' was inspired neither by the ankh (the Egyptian cross with the closed loop on top), nor by the Australian or New Zealand species of bird (frogmouths and small owls, respectively) that go by the name of 'Morepork'.

And apparently when somebody suggested that Ankh-Morpork was a takeoff on Fritz Leiber's city of Lankhmar, where most of the stories with Fafhrd and the Gray Mouser are set, Terry said

"Bravd and the Weasel were indeed takeoffs of Leiber characters – there was a lot of that sort of thing in The Colour of Magic. But I didn't – at least consciously, I suppose I must say – create Ankh-Morpork as a takeoff of Lankhmar."

On the other hand, Bravd and the Weasel in The Colour of Magic are clearly takeoffs of Fafhrd and the Gray Mouser, and Ankh-Mor sounds very much like Lankhmar, so I think it's quite possible that Terry unconsciously used Lankhmar as a model for the name of the city.

On a slightly more surreal note, Pratchett jokes in the Fifth Elephant that 'Morpork' is the word in the Beyonk language of Uberwald for an item of ladies' underwear.

Lord Vetinari quickly cuts off Vimes when he starts speculating about exactly which item.

Probably more of a tongue in cheek joke than intended seriously but potentially relevant to the discussion?

Hmmm.... maybe the name came from this brand of meat product from ages ago? 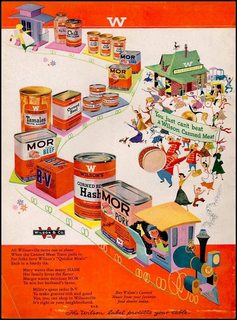 (note the MOR PORK tin in the first train car)

Not the answer you're looking for? Browse other questions tagged names discworld or ask your own question.

10
Does Terry Pratchett's Discworld follow on from Strata?
18
In what country are the cities of Ankh and Morpork located?
16
What is the physical size and population details of Ankh-Morpork?
6
Where on Disc did Tethis go?
2
Are the names Tom Riddle and Harry Potter a reference to the phrase "any Tom, Dick or Harry"?
35
Terry Pratchett's Discworld: is there an inconsistency in the treatment of magic?
2
How did Tolkien and Lewis come to use the similar names "neekerbreeker" and "Nikabrik"?
2
What is the significance of the name Azazel for Asimov's demon?
50
What does Pratchett's "poets notwithstanding" joke mean?