In Knightfall, how did Bane discover Batman's identity?

Towards the end of the Knightfall storyline, Bane is reavealed to have uncovered Batman's real identity and shows up at Wayne Manor. How did he know that?

In the issues, Bane does have an obsession with Batman, but he's rarely in direct contact with him. And he doesn't even tail him. He's delegated that task to the falcon guy (named 'Bird'); and clearly Bird isn't the one to figure it out. Bird even asks Bane how he knew, to which Bane doesn't give a real explanation.

After 'Knightfall: Who Rules the Night', Bane barely appears at all in in KnightQuest and KnightsEnd. (It's possible I missed an issue or two. And some issues I got my hands on had a few pages missing.)

So, my question is, do we ever learn how Bane deduced that Bruce is Batman? If so, in what issue(s)?

As I recall, Bruce Wayne is attending some sort of gala or something, and Poison Ivy mind controls all the attendants (except Bruce Wayne, who slips on a filter). Then as Bruce is pretending to be a zombie with the rest of the group, Bane observes him and says "That man is the Batman." He has studied Batman so much, that he is able to see through his "fake" persona of Bruce Wayne. 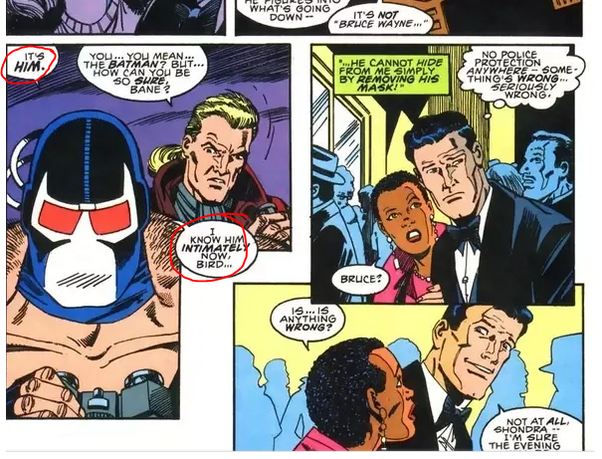 It's HIM. I know him Intimately now, Bird...He cannot hide from me simply be removing his mask!

Not the answer you're looking for? Browse other questions tagged dc batman bane or ask your own question.

32
How many people have deduced Batman's secret identity?

24
How does Bane know Bruce is the Batman?
20
How powerful are the other League of Shadows members?
4
When do Batman and Bane first fight?
32
How many people have deduced Batman's secret identity?
23
Have we ever seen Bruce Wayne getting facial re-constructive surgery?
12
Is Alfred the moral conscience of Bruce Wayne/Batman?
6
How many times has someone other than Bruce Wayne had to assume the mantle of Batman?
80
Why did Batman do so much better in his second fight with Bane?
8
Does Lex Luthor know Batman's identity?