I am trying to identify the title and author of a fantasy-ish satire book. It was a YA book, I think published in the last 10 years.

It is the main character's senior year of high school, and then some sort of supernatural thing begins, and deers begin freaking out and wreck the main character's car. While all this is happening, a new guy arrives at the school. At some point a concert stage explodes, and chaos ensues. A lot of people die mysteriously and a bridge gets spray-painted. All the adults behave really weirdly (except for 2-3) while a political race happens. Freak lightning suddenly begins to strike, then, on prom night, a bunch of things happen which lead to the school burning down. Ends with people swimming in a lake.

The title was some sort of cliche-y thing, and I think the cover was blue.

This is The Rest of Us Just Live Here by Patrick Ness. Characters include Satchel, Finn, Aquamarine, Lincoln, Archie, etc etc 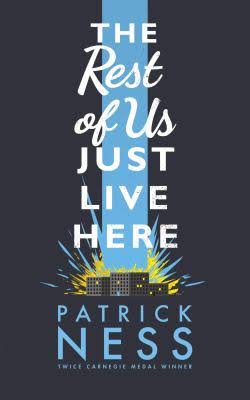 16
Book identification: Beings from another dimension and a black virus
6
Short story: dripping tap summons up ghosts
17
Fantasy Novel about a man named Q-something who finds a glowing rock in a pool and becomes king
9
Looking for title of a sci-fi book about dystopian future with implantable devices
5
Zombie-like creatures fill the world and the ring has tremendous power
3
Recalling kids/YA sci-fi book about students educated and/or controlled by brain device
5
Isekai manga where the main character is the weakest among the students?
8
Book about five people who have magic powers, and at the start and end of each book there was a few pages of comics of stuff that happened in the book