What is the Imperial Navy rank structure and where was it inspired from?

In reading Thrawn he receives a few ranks which I found interesting. He is a commodore and ultimately a grand admiral.

What was the rank structure in the Empire's navy? And what was the motivation/basis for this structure, particularly when I believe some of the ranks are different than existing ranks in most militaries?

The (Legends) ranking system is described in The Essential Guide to Warfare by Del Rey (2012). 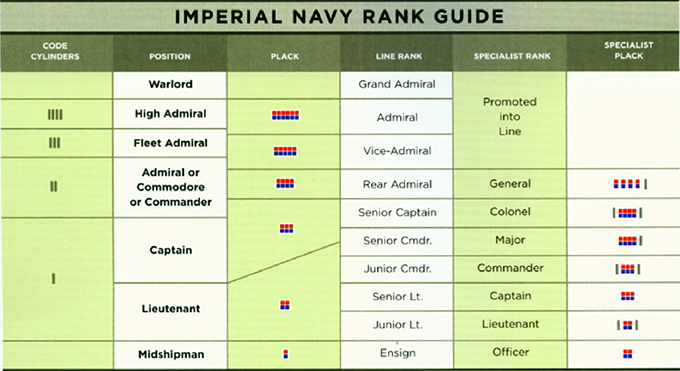 The guide describes the difference between positions and line ranks as following:

Position is an officer's current assignment to a specific ship of unit, as opposed to permanent rank. The positions of Warlord and High Admiral are essentially honorary, normally held by Grand Admirals and Moffs.

Line rank is held by line officers, the men who command the bridge crew, captain ships, and hoist their flag over fleets. There are very few officers with permanent line ranks above senior captain (formally known as captain of the line).

Out-of-universe, the inspiration seems to come from the military rank systems on Earth, with great influence of American and British systems. There are many similar rank names, with some fictional flavor added, of course.

There is a good list of naval officer ranks in Wikipedia.

The Canon ranks are as follows:

In many Legends books, the ranks are slightly different:

4
What does the colors mean for the Galactic Empire ranks?

18
What is the inspiration for Moff?
3
What are the lower Rebel Alliance ranks?
31
What was Darth Vader's official role (or rank) in the Empire?
7
What is the rank structure of Imperial Stormtroopers?
3
How is the Republic Military divided?
50
Is there a reason given in-universe for Orson Krennic's outfit beyond pure ostentation?
4
Was Imperial Navy based on Imperial Japanese Navy?
49
Is there an in-universe explanation given to the senior Imperial Navy Officers as to why Darth Vader serves Emperor Palpatine?
3
What is Valin Hess’ Imperial rank?