Why were Sauron and Saruman not considered Balrogs?

Balrogs were in the service of Morgoth before Time

Mairon was a servant of Aule, not Melkor

Although VoC claims Balrogs were a "spirit of fire" only two characters in Tolkien's writings are ever described as such. However from The Complete Tolkien Companion we get the following

“In their origins, as a part of the Thought of Ilúvatar, these were MAIAR of the following or service of Melkor, the mightiest of the Ainur. They had the form of spirits of fire. At the beginning of days they took service with Melkor, and were swiftly corrupted to his purposes, appearing everafter to Elves and Men as demonic beings of great size, fire-enshrouded, who bore, as their principal weapon, a whip of many thongs.”

This seems to suggest that the Balrogs were part of the service of Melkor during the Music of the Ainur. These "spirits of fire" were in the service of Melkor before time and were corrupted to his purposes after coming to Ea. This means that Sauron and Saruman as Maiar of Aule were not Balrogs as they did not originate with Melkor during the music.

For of the Maiar many were drawn to his splendour in the days of his greatness, and remained in that allegiance down into his darkness; and others he corrupted afterwards to his service with lies and treacherous gifts. Dreadful among these spirits were the Valaraukar, the scourges of fire that in Middle-earth were called the Balrogs, demons of terror. Among those of his servants that have names the greatest was that spirit whom the Eldar called Sauron, or Gorthaur the Cruel.
The Silmarillion: Valaquenta

Gothmog was the Lord of Balrogs, yet Sauron was Melkor's second-in-command, had he been a Balrog, he would've been the "Lord".

That stronghold was commanded by Sauron, lieutenant of Melkor; and it was named Angband.
The Silmarillion: Chapter 3, Of the Coming of Elves and the Captivity of Melkor

In all the deeds of Melkor the Morgoth upon Arda, in his vast works and in the deceits of his cunning, Sauron had a part...
The Silmarillion: Valaquenta

And Legolas labeled the Balrog of Moria a Balrog and claimed him to be the second most deadly of Elf banes. If Sauron was a Balrog, would the Balrogs not be the deadliest?

It was a Balrog of Morgoth," said Legolas; "of all the elf-banes the most deadly, save the One who sits in the Dark Tower.
The Fellowship of the Ring: Book 2 - Chapter 7, The Mirror of Galadriel

Curumo is of the Istari

Similar to Sauron, Curumo is a Maia of Aule and was therefore not corrupted by Melkor during the music. Even though Saruman fell from grace. He is of the Istari. He was corrupted by the ring to take control of what he couldn't. Just because he became evil does not make him an Balrog. Although I don't really have anything to support that besides the fact that when they saw Sharkey in the Shire, he looked like Saruman and not like this: 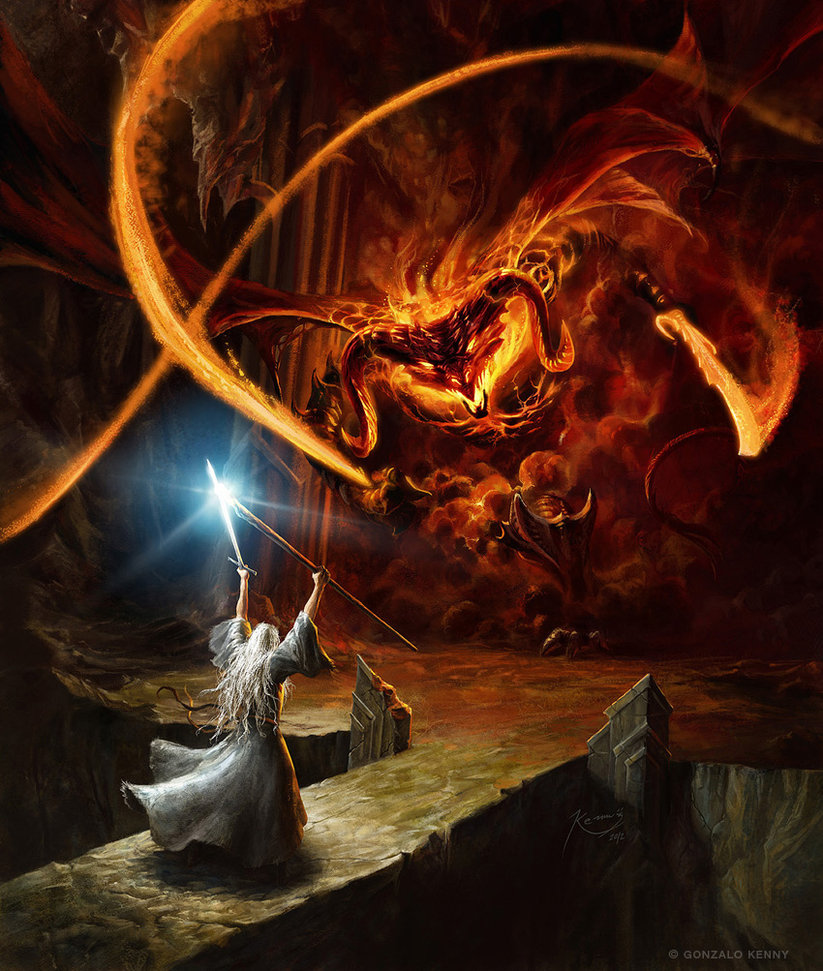 Balrogs were a specific type of Maia - spirits of fire - whereas both Sauron and Saruman were mentioned as being not of that type.

The only other Maia of this type mentioned in the texts is Arien, the guide of the Sun:

...and she was chosen because she had not feared the heats of Laurelin, and was unhurt by them, being from the beginning a spirit of fire, whom Melkor had not deceived nor drawn to his service.

(The Silmarillion, Of the Sun and Moon and the Hiding of Valinor, with my emphasis)

If Arien had been corrupted she would doubtless have become a Balrog; because Sauron and Saruman were not spirits of fire, they do not become Balrogs.

Not the answer you're looking for? Browse other questions tagged tolkiens-legendarium the-lord-of-the-rings sauron saruman balrogs or ask your own question.

14
Were Uruks (as a breed) created by Sauron or Saruman in LOTR books?
39
Why did Saruman seem to believe that Sauron wouldn't return?
57
How did Gandalf elude and puzzle Sauron?
32
How had Saruman "cheated" Sauron?
20
How large were Saruman's and Sauron's armies?
4
Balrogs: Valar, Maiar or Spirits?
22
Are the Valar vulnerable to the One Ring?
8
Could an Elf kill Sauron in single combat?
27
What would have happened to Saruman if Sauron acquired the One Ring?
21
Why did Saruman lose everything but Sauron kept doing what he wanted?