How did Doc manage to build the time train in the 1880s?

There has already been a question about why Doc built the time train. My question is how he did it.

Doc clearly could not fix the DeLorean to return back to the future. Thus, he hid the car in the Delgado mine leaving Marty a letter which indicated that the necessary components would not have been invented until 1947.

And yet he somehow managed to build a time machine inside a train after he left with Clara in 1885. We know that the time train was already working when both his sons were not older than 10 years old. This means that he had build the time train presumably not later than 1895. Even at that time there were no electronic components available. How did he create the flux capacitor then?

The very short answer is that (at least according to the IDW comics released by Bob Gale, the writer of the films) Doc Brown was able to cobble together a working time machine by using components from the hoverboard as well as his own knowledge of metallurgy and science. 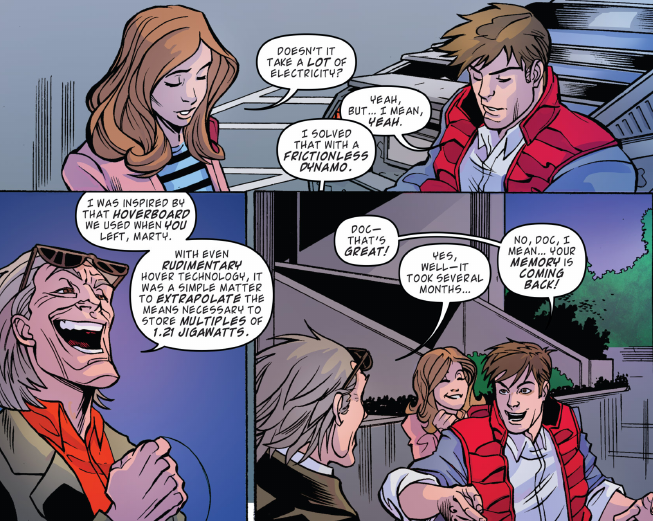 Although his time travel device (a modified steam car) was only able to make a single trip before breaking, he was able to travel forward into the 1980s to collect the items needed to return to the past and get the Jules Verne time-train working, then finally traveling to the 2050s to get it hover-converted before returning (after a few adventures) to give the picture to Marty.

As to Flux Capacitor itself, building a simple capacitance chamber in the 1800s would be child's play for someone with a working understanding of chemistry, electronics and metalworking.

He also could use all the functional parts of the DeLorean hidden at the Delgado Mine (at the time of the film, there were TWO time machines at the place: the one in the mine to be discovered at the 50's, and the other that Marty used to get to that past and without oil).

The main problem at 19ht century was the lack of fuel, but Doc saw that rail locomotives were able to reach the limit speed. He could dismantle the flux capacitator, the time circuits, the Mr. Fussion device... Install all of them in a normal locomotive, travel to the future year 2050, adapt it to the Jules Train configuration, go back to the 19th century to return the "borrowed" original special parts of the DeLorean at Delgado Mine (for maintaining time continuity so Marty and young Doc could find it in the 50's), and then go back yo the future (the 80's) to meet Marty after the train crash.

And remember when marty went back in time twice to meet the younger doc brown who got more knowledgeable about his own time machine. ...he kept making him self smarter about it...

23
Why don't Marty and Doc Brown use petrol from the Delorean in the mine in BTTF3?
15
Why did Doc build the Time Train?

23
Why don't Marty and Doc Brown use petrol from the Delorean in the mine in BTTF3?
19
How is the DeLorean powered in the final trip back in time in Back to the Future III?
4
Do any other dates in Back to the Future have any significance out of universe other than November 5?
15
Why did Doc build the Time Train?
5
Why did the Doc decide to use a train?
40
Why did Doc Brown take so long to write to Marty?
5
Why didn't Doc Brown want to bring Clara to the future?
19
Why didn't doc and Marty just add a small metal plate or something to the old Delorean?
25
Were there two DeLoreans in 1885?