Does Bucky Barnes die and then resurrect? 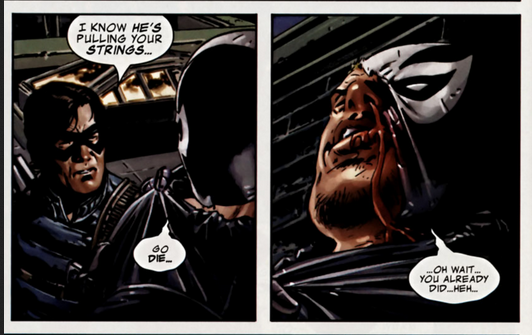 This is from Civil War: The Conclusion. Someone had shot Captain America, so Bucky Barnes was following him and this scene happened. What does Crossbones mean here?

There are several misconceptions in your question, so I'm just going to address the general question of "What happened to Bucky Barnes after he fell off the train?".

The first thing worth noting is that in Captain America: The First Avenger, Steve Rogers rescued Bucky from Hydra captivity after finding him having recently been experimented on by Dr. Arnim Zola. It is theorised that Dr. Zola was working on his own version of Dr. Abraham Erskine's Super Soldier Serum, and it is this that was being tested on Bucky when Steve found him.

We don't know a whole lot about the details of the experiment that was performed, but we do know that since that experiment, Bucky has survived a lot of things that should have simply killed him (such as falling from the train, working as an assassin for a few decades, being frozen and thawed multiple times, etc) so we can conclude that even if Dr. Zola's experiment didn't make Bucky as capable as Steve, it at least 'powered him up' somewhat.

Some point after falling off the train and losing his arm, Bucky was acquired by the new Hydra, lead by Dr. Zola (who was, by this point, working for SHIELD while creating his new Hydra from within). It is at this stage that Bucky underwent further experimentation, presumably including the addition of his mechanical arm and the beginning of the memory wipes that, judging from Captain America: The Winter Soldier he undergoes fairly frequently.

In short, Bucky is still alive because the experimentation done on him by Dr. Zola allowed him to survive his fall from the train - but unfortunately delivered him back into Dr. Zola's care, who turned him into The Winter Soldier.

The original Captain America and Bucky, World War II careers were cut short when they were trying to thwart a plot by Baron Heinrich Zemo. They were captured and tied to a remote-controlled plane with a bomb in it. Bucky saw a bomb and tried to defuse it; the plane exploded. Cap actually fell off just before the explosion, Bucky did not. From the early 1960's until just before the Civil War storyline, Bucky was assumed to have been killed in the explosion. Cap was thrown in the water, unconscious; it was far enough north that currents carried him to the arctic, and his body reacted (thanks in some part to the combination of the super-soldier serum and the cold, we assume) by going into a state of suspended animation, and was eventually frozen in a block of ice.

However, we learned in Ed Brubaker's run on Captain America, Bucky did not die. His body was recovered by Russian operatives; he wound up brainwashed, his let arm replaced with a robotic (bionic, if you prefer) one, and being used by the Russians as a very special operative/assassin. The brainwashing wasn't 100% effective over time, so he was kept in some sort of suspended animation himself most of the time, only being revived when needed. He was involved in an unknown number of operations between WWII and the early 2000's (or, given Marvel's floating time line, "a few years ago"). Then, due to a combination of the slipping of the brainwashing and Cap "wishing" on a Cosmic Cube, he was restored to his normal self.

Crossbones is simply referring to the fact that he was believed dead (and, in a sense, was - he wasn't in full control of himself for decades).

27
Does Bucky Barnes Have Superhuman Abilities?
3
What happened to the other super soldiers?
34
What was Black Panther's ring doing?
31
How fast were Bucky, T'Challa and Steve running in Civil War?
7
Why did Bucky Barnes ask "What did I do?"
5
Was this incident in Captain America: Civil War officially confirmed to be a consequence of Spider-Man’s Spidey sense?
3
Why was Bucky Barnes named after such a disastrous figure in American history?