Soldiers eating Ork burgers is referenced in a few works based in the Warhammer 40,000 universe. Given the very strange physiology of the 40k Orks, could humans actually ingest them?

I am referring to standard Imperium humans and not Space Marines, who could probably eat a raw Ork and its boots without issue.

I am particularly looking for references in official source material.

So I flipped through my copy of Rogue Trader and this is really the only section I found that relates:

...Humans and Orks share a similar physiology, and require the same sort of worlds on which to live...

Beyond that there was not much. I flipped through all the subsequent rulebooks and could not find much either. I never really thought about it but only the last few rulebooks had larger sections on the lore of species. The first few only had a quick paragraph to introduce them and then rules.

Quite honestly I would expect to find a section about humans eating orks within either an Imperial Guard codex or within a novel. I was hoping there would be excerpt section in one of the books that described something, but I could not find anything in any of them. I do not have any books on the IG or Orks to expand beyond that unfortunately; and i do not remember any of the Tanith eating Orks so my knowledge of IG novels is spent there as well!

Unless you comment otherwise I will likely delete this entire answer in a few days once I think you have had a chance to see it. Hopefully someone else has something more positive to contribute...

Doing a quick search online I just read something that mentioned humans eating ork in the original Rogue Trader. I am at work now, but i will try to remember to flip my copy open tonight and if i see anything definitive i will throw in update for you. If I can not find anything definitive or someone else posts something definitive I will likely just delete this answer.

I think it is worth mentioning the obvious. There is no way Earth could feed the Imperium as a whole, or even the agri-worlds. Therefore, humans are eating flora and fauna from other worlds. Given the size and scope of the Imperium, I would argue that this means that humans for whatever reason have either developed a tougher digestive system to adapt or that the galaxy has "similar bio-chemistry" from planet to planet (at least on survivable worlds). Given that orks and humans can survive under the same conditions, the bio-chemistry between the two could be "in the same neighborhood" and they could be edible both ways as well. If that logic makes sense...

I also found this passage toward the strange cannibalism topic that was begun above... if anyone cares... it is from a 40k wiki...

Soylens Viridians - A bland but otherwise filling and somewhat nutritious vat-grown foodstuff. It is also known as "Corpse-Starch" as it is said to be made from human corpses, mixed with random dead animals, plants, and other sources of dead biomatter typically disposed of in Hive cities to be recycled into food to lessen waste. Soylens Viridians is a common staple among underhives, military rations, and other places where high demand for food meets low standards for taste. Several Mechanicus worlds in the Damocles Gulf favor it, considering it a far more efficient means of ingesting nutrients than plain animal tissue. Ciaphas Cain complains about the lack of flavour on a few occasions in his private memoirs.

As detailed in Waaargh! Orks, Squigs are edible. 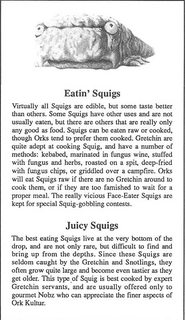 Virtually all Squigs are edible, but some taste better than others. [...] Squigs can be eaten raw or cooked, though Orks tend to prefer them cooked.

AFAIK, Squigs are perfectly edible for baseline humans, so all the other orkoids must be edible as well, since they are all basically the same.

Technically Maybe Yes, But No

In the 40k universe you don't have to worry about protein compatibility or a host of other "hard science" reasons why things which evolved separately on different planets would be mutually indigestible. Either the Old Ones made everybody out of the same underlying structure or handwavium has been applied. So the question then becomes, is it doable from a "can we eat that sort of plant" level? The answer here is more ambiguous.

We know from Book 2 of the Ragnar Blackmane series that Orks can be eaten by space marines, as one marine munched on an ork so a marine can drive a trukk via his Omophagia gland. (They aren't specific as to how much, but traditionally part of a creature's brain gives best results.) There are similar references scattered around to marines eating ork as well. Of course a Space Marine can ingest things that would kill a normal human (Mjod comes to mind) so this isn't perfect proof.

The real problem comes with Ork physiology. It's not an animal, it's an amalgam of fungal and animal properties. When one dies, its body releases spores. These spores, if they land in the right area, will spawn not just orks but EVERYTHING IN ORK SOCIETY. So Orks, gretchin, squigs, snotlings, and a whole host of other things. These "things" go down right to the microbial level apparently, as the Tyranid vs. Orks Octarius War is described as occuring "down to the microscopic level." What's more, the ork spores are described in the Octarius War blurb as "aggressively spreading." I think it's this last bit that puts paid to the idea of humans ingesting ork 'meat' in any meaningful quantity.

Even assuming that the fungus/meat is digestible by a human, there's the chance that these "aggressively spreading" ork microbes will get into your body along with the cooked meat. Medium rare orksteak? Congradulations you have spores. Given that they're described as being "at war" with tyranid microbes I don't think we can assume the human digestive system could handle them, and what that means for the poor person who ingested the meat I can't say. *

The biggest "no" I can think of though would be cultural. The Imperium Doesn't Do Xenos. Xenos are polluted and evil and sinful, why in the name of the Emperor would you willingly place some of that pollution and sin inside your own body? The imperium doesn't even hold with Xenos crops, so why would they ever want you to eat an alien? (there's a lovely bit about it in Traitor General where 'xenoagricultural' stuff is considered unclean and not fit for consumption even though it's not, strictly speaking, chaotic in nature.)

At the end of the Day Rogue Trader is no longer considered canonical, and I think without clear and exact references to a bit of RT fluff in the more recent fluff we have to conclude it is no longer considered a thing. Especially when it goes against the grain as much as ork burgers do. Which is a shame, because I would LOVE to see an agri-world that produces Ork/squig paddies as their primary foodstuff.

Not the answer you're looking for? Browse other questions tagged warhammer-40k food or ask your own question.

4
Can Warhammer Fantasty vampires gain sustenance when feeding on Greenskins?

10
Are Tau capable of reverse engineering advanced technology
14
Why are Slaaneshi Daemonettes so Ugly
11
Are Tyranids the creation of humans?
13
Do Orks affect non-orks with their latent psyker abilities?
6
How does walking dead still have edible (canned) food?
2
How often are Space Marine chapters deployed?
8
Are Space Marines capable of fighting underwater?
11
How many Chaos God are there in WarHammer 40k?
0
What are the Blood Pact / Sons of Sek ranks?
14
Are there any other Chaos-worshipping races?