How did Data not know what Aldebaran Whiskey was?

In the TNG episode "Relics" where Scotty returns, Data serves Scotty a glass of a green liquid which he cannot identify. The drink is later identified by Picard as Aldebaran Whiskey, which seems to be a fairly well-known liquor during the TNG era. It makes appearances throughout the franchise, and Quark at DS9 keeps several barrels of it in a storeroom.

Given his usual penchant for being a walking encyclopedia, how was Data not able to identify Aldebaran Whiskey... or even recognize the language on the label as Aldebaran?

And, yes, I realize the scene was a nod to Scotty's identical scene in a TOS episode. I'm looking for an in-universe reason. At the very least, Data should have known it was Aldebaran.

The screen direction in the original script indicates that Data was simply unable to read the label. Since the earlier direction is that the bottle is "very old" the implication would be that the label is decayed rather than that he doesn't speak the language. He smells it but is unfamiliar with the scent.

Data bends down and reaches under the bar... then stands up and puts a very old bottle of a green liquid on the bar.

SCOTT: What is it?

Data is unable to read the label. He removes the cap and sniffs the contents... but still doesn't know what to make of it... he looks at the liquid and finally tells Scott the only thing he knows for certain.

DATA: It is green.

As you can see from the shot below, the label is essentially blank. 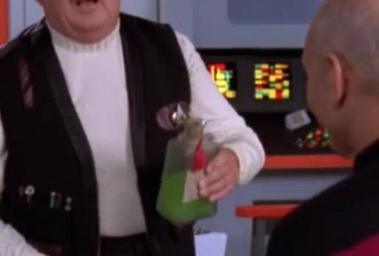 Not the answer you're looking for? Browse other questions tagged star-trek star-trek-tng star-trek-data plot-device or ask your own question.

9
What was the green drink that Scotty could not identify?

51
Why could Data not use contractions?
13
Why did people think Data was a Frenchman?
13
What did Data throw in the fire?
16
Why does Data not notice the intruder?
4
How can Data know nothing about the Orient Express?
0
How does Data know what Bingo is but not what perfume is?
9
What was Data reciting?
9
How did Sela know that Data was captain of the Sutherland?
9
What was the green drink that Scotty could not identify?
31
How does Data know about his off switch?