I listened to this on audiobook and it was great.

The premise was a human ends up travelling to an alien planet. The aliens have a perimeter to their 'base' that is under constant attack from the planet's animals. It is revealed towards the end that there is some sort of signal being transmitted that is making all the animals and plant life attack a certain point on the planet (where the aliens are).

Other major plot points I remember: The human traveller falls in love with an alien. The aliens have a sort of virtual training environment that simulates life outside the perimeter, where plants attack you etc. There is a secondary alien group that the human ends up with, and although they are rivals to other group, they have a trade set up.

Any help much appreciated! Thanks.

story-identification books
Share
Improve this question
edited May 30, 2017 at 2:23 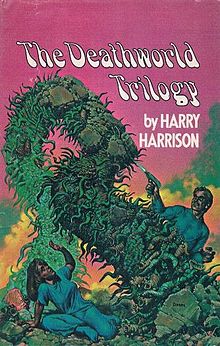 It's a part of a trilogy. Plot summary from Wikipedia.

Deathworld centers on Jason dinAlt, originally from an agrarian planet Porgorstorsaand, a professional gambler who uses his erratic psionic abilities to tip the odds in his favor. While on a gambling trip to the casino on the planet Cassylia, he is challenged by a man named Kerk Pyrrus (who turns out to be the ambassador from the planet Pyrrus) to turn a large amount of money into an immense sum by gambling at a government-run casino. He succeeds and survives the planetary government's desperate efforts to steal back the money. In a fit of ennui, he decides to accompany Kerk to his home, despite being warned that it is the deadliest world ever colonized by humans.

Everything on the planet is predatory, and capable of killing an unwary human instantly. All large animals are strong enough to destroy small vehicles. All small animals have neurotoxic venom. All plants are carnivorous, even if only by default—their victims fertilize their soil. All microorganisms consume insufficiently protected tissue as quickly as acids. On top of this, all the aforementioned life evolves so quickly that even Kerk and his Pyrran crew have to be retrained upon their return from Cassylia in order to survive.

Jason has the grubbers guide him back to the city, so he can see it from the outside. There his psionic senses confirm his hypothesis. Every species of native flora and fauna is psionic, and all life around the city is telepathically "shouting" the same thing: KILL THE ENEMY! Pyrrus' biosphere is intentionally attacking the city.

27
A human settled alien planet where even children are issued blasters and must be good at using them to kill constantly attacking lifeforms
8
A story (novel?) about a planet where life evolves to be specifically harmful to humans
11
Short story with mercenaries trying to board a mothballed starship
6
Looking for short story about human outpost on alien world with dangerous native animals/insects
9
SciFi book series about a guy surviving in three deadly planets
8
Looking for novel about alien planet adapting to human aggression
6
Sci Fi novel possibly from the 70s on high gravity world
8
Know a short story (Heinlein?) about a man constantly fighting alien life forms, realizing at the end that they're projections of his own feelings?
8
Trying to remember a book where technology is split amongst different political groups
4
80's (or earlier) book with gun-like weapons holstered on one's forearm, connected to their wrist nerves to jumps into their hand at will
See more linked questions

11
Book where a man unlikely to survive is stranded on an alien planet with water under the earth in plants
12
Short story about humans marooned on high gravity planet
15
Book about a water planet, part of a human empire
9
Pre-1975 book ("Rawroak Calling"?) about Earth's finest landing on a far planet, developing superhuman strength because of the threefold gravity
7
Book involving Alien Invasion, enslavement of human race
20
Which story is about an alien race surviving the approach of hot companion star in elliptical orbit?