Did the Cave Trolls turn to stone when the shadows lifted from Mordor?

Did Sauron's Cave Trolls that roamed about under the shadows in and around Mordor turn to stone when shadows were lifted? Are all Trolls affected like Bert, Tom, and William in The Hobbit? 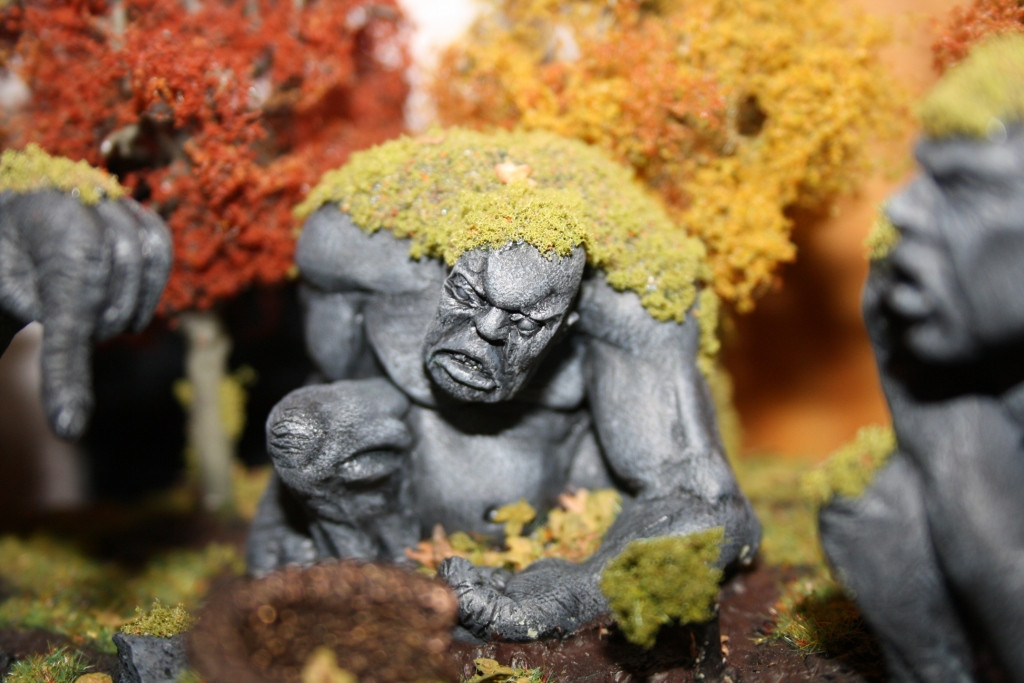 There are different types of trolls, and for each their reaction to sunlight may be different:

From what I've read Stone Trolls turn to stone, and from that I can only guess so might cave trolls; I can only find ambiguous information.

Olog-hai are the troll equivalent to Uruk-hai, and the only ones who are explicitly stated not to turn to stone whilst 'under the sway of Sauron's will'.

My reading of Tolkien, An Illustrated Encyclopedia seems to imply that all trolls, besides Olog-hai are crafted from the same spell Melkor cast in the first age of starlight (before the age of sun), and thus they should all turn to stone in sunlight.

Then we must infer that the same spell stopping the Olog-hai from petrifying stops the cave trolls from likewise turning to stone.

Finally the spell that Sauron used to give the Olog-hai that he created intelligence and cunning is dispelled upon Sauron's defeat:

Yet they [Olog-hai] were held by a mighty spell, and, when the Ring was unmade and Sauron went into the shadows, the spell was broken.

One might surmise that all trolls now turn to stone, yet my book only mentions that the Olog-hai wandered senseless and were defeated and scattered. So they didn't turn to stone. But I believe the spell that Melkor cast in the darkness is still ruling over the Cave Trolls, meaning they turn to stone. Whereas the one that Sauron cast in the light, prevents such a misfortune befalling the Olog-hai.

I've just found my partner's copy of A Tolkien Bestiary, and it mostly reiterates the above reasoning, except only mentioning Olog-Hai were specially bred, and there is no mention of Cave Trolls. I think this only backs up my previous conclusions.

The ultimate answer to your questions is that no, not all trolls turned to stone in daylight, and we don't know what happened to Sauron's trolls.

There were many types of trolls in Arda, and Letter 153 implies that only stone trolls, e.g. those Bilbo encountered, definitely turn to stone when not in the dark. Trolls of other origins may not:

I think [Trolls] are mere 'counterfeits', and hence (though here I am of course only using elements of old barbarous mythmaking that had no 'aware' metaphysic) they return to mere stone images when not in the dark. But there are other sorts of Trolls beside these rather ridiculous, if brutal, Stone-trolls, for which other origins are suggested.

Having established that, we then see mountain-trolls in the Battle of the Pelennor Fields:

in the midst was a huge ram, great as a forest-tree a hundred feet in length, swinging on mighty chains. ... behind walked mountain-trolls to wield it.

While this was under darkness (a cock crows, heralding the dawn, a few paragraphs later) it only just preceded the dawn. As a result I will go out on a limb and say that these mountain-trolls would not have been out there if there was a risk of them turning to stone while they wielding Grond, the battering ram. There is also no mention of the disposal of trolls who had been turned to stone from in front of the gates. This is my own supposition though.

The only definite confirmations we have of trolls in daylight are two-fold:

1) The hill trolls at the Battle of the Black Gate:

The wind blew, and the trumpets sang, and arrows whined; but the sun now climbing towards the South was veiled in the reeks of Mordor, and through a threatening haze it gleamed, remote, a sullen red, as if it were the ending of the day, or the end maybe of all the world of light.

...through them there came striding up, roaring like beasts, a great company of hill-trolls out of Gorgoroth.

2) The Olog-Hai, as mentioned in the Appendices:

at the end of the Third Age a troll-race not before seen appeared in southern Mirkwood and in the mountain borders of Mordor. Olog-hai they were called in the Black Speech. That Sauron bred them none doubted, though from what stock was not known. ... Trolls they were, but filled with the evil will of their master: a fell race, strong, agile, fierce and cunning, but harder than stone. Unlike the older race of the Twilight they could endure the Sun, so long as the will of Sauron held sway over them. They spoke little, and the only tongue that they knew was the Black Speech of Barad-dûr.

These may or may not be of the same type. It can be supposed that they are, but there is no firm evidence for it. In the Olog-hai quote, the "older race of the Twilight" can be assumed to refer to standard stone trolls, as one of the initial drafts of this passage (from The Peoples of Middle-Earth) indicates that they were descended from the stone trolls:

That Sauron bred them none doubted, though from what stock was not known. Some held that they were a cross-breed between trolls and the larger Orcs; others that they were indeed not trolls at all but giant Orcs. Yet there was no kin- ship from the beginning between the stone-trolls and the Orcs that they might breed together;(5) while the Olg-hai were in fashion of mind and body quite unlike even the largest of Orc-kind.

To finally answer your question: any trolls in Mordor after Sauron's fall were most likely to be Olog-Hai, not cave trolls, though that is not certain and there could indeed be various types represented. Sauron would no longer be exerting his will over them, so they would no longer be able to "endure the Sun".

Whether that means that they immediately turned to stone, or merely now hid from the Sun is a separate question again. So given all the questions left unanswered, you can see why my answer to begin with was "we don't know".

I think it's quite possible Sauron had mountain Trolls as well as Olog-Hai under his command. Mountain Trolls could still have been susceptible to sunlight and still have fought in the battles of Pelennor fields and the black gate as Sauron covered his forces with the cover of dark clouds during the two battles.

30
Are there multi-headed trolls in Middle-Earth beyond The Hobbit reference?
5
What happened to the rest of Bert, Tom and William's treasure trove?
13
Where does the treasure in the troll cave come from?
6
Why do the trolls turn to stone in daylight?
11
Trolls and the Olog-hai
9
Why do the trolls have civilized names?
6
Why did Gollum want the Ring so badly when he was still a hobbit?
35
When Frodo was guided by Gollum to the Black Gate, how did he intend to enter Mordor?
41
Are all instances of trolls turning to stone ultimately references back to Tolkien?
10
Do the trolls in the Hobbit have a magic purse, and did they enchant it themselves?