What does the boy mean by “the other egg of the Phoenix”? Which one is it?

I've been re-reading some Sandman stories, and this time it was "Ramadan", exquisitely drawn by P. Craig Russell.

One thing towards the end confused me, and I hadn't even noticed it in my first reading - "the other egg of the Phoenix", as told by the boy walking on the streets of destroyed Baghdad: 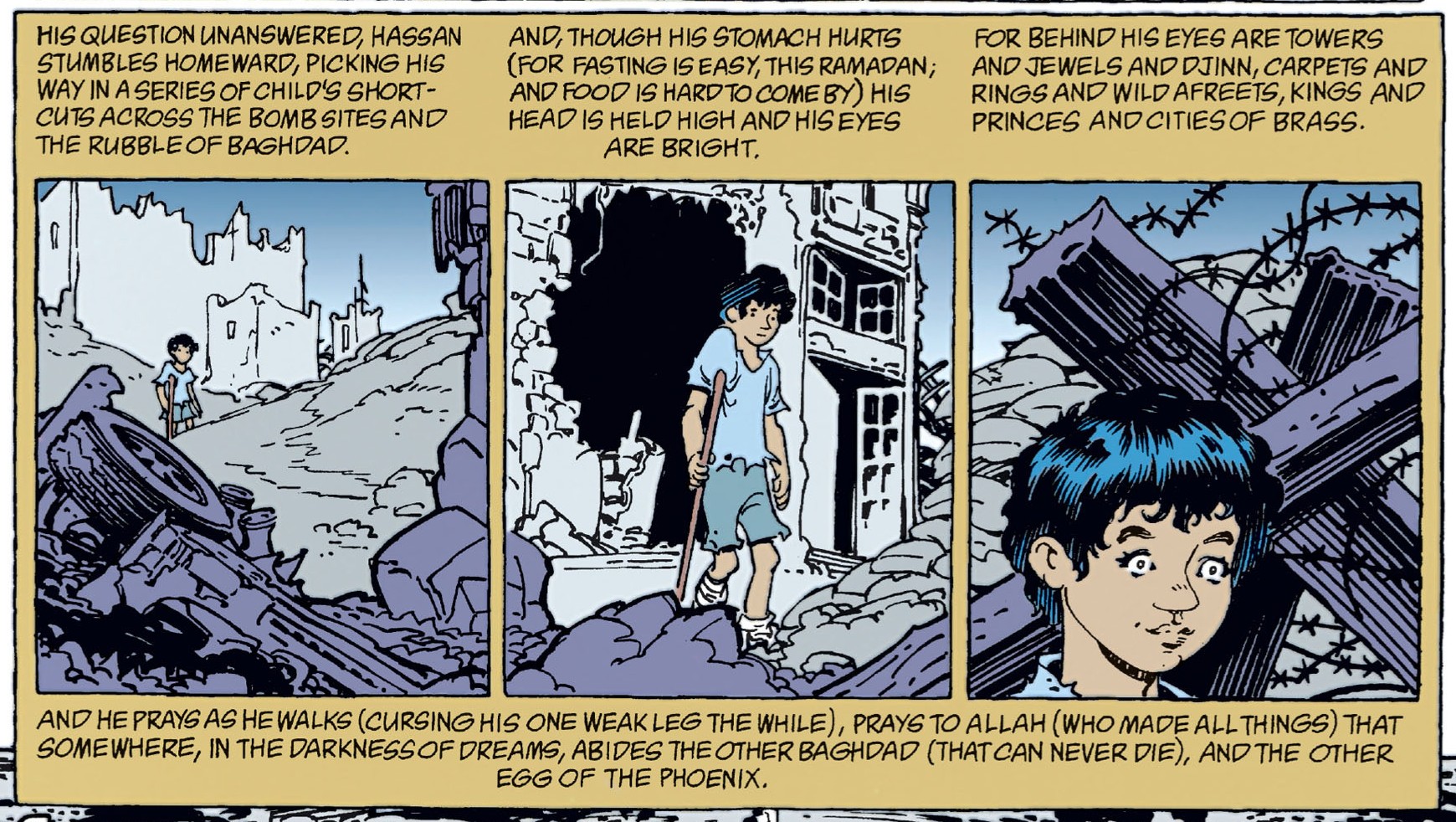 Surely he's thinking about one of the two eggs of the Phoenix that were in Rashid's palace, one white and one black: 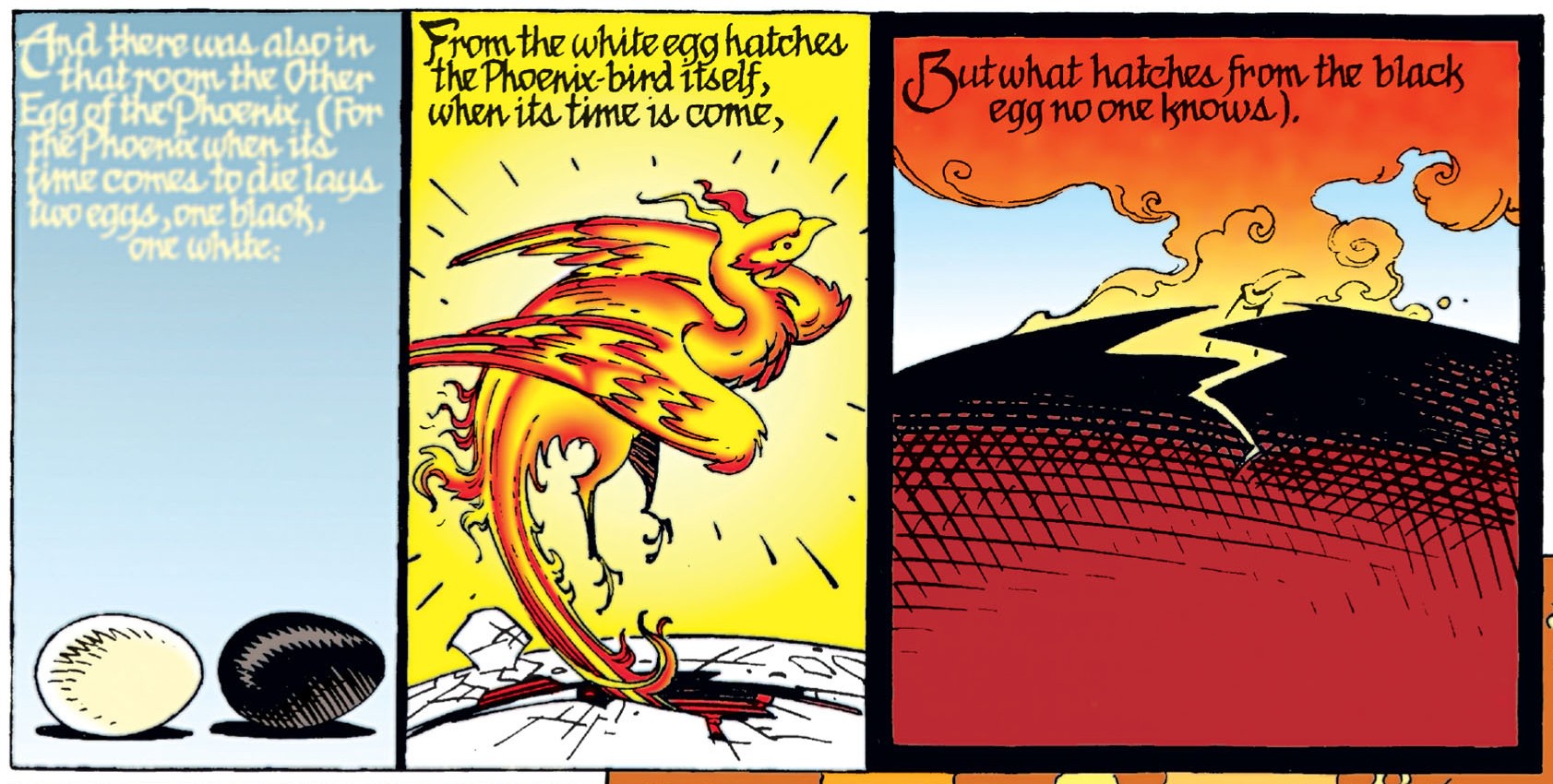 But which one? And even past that, why think of the eggs of all things?

I can see the first egg being a symbol of renovation, which would be appropriate in the case of Baghdad, but why say "the other egg" then?

When the text (and the boy) states "the other egg of the phoenix", it's referring to the black egg.

Note that when it is described, the panel shows the two eggs, but only says the "Other Egg" is in the room. In then goes on to explain the difference between the two eggs shown, to contrast this "Other Egg" from the standard myth of how the phoenix is reborn. It's still just the black one that's supposed to be there (or if the white one is actually there, it is unimportant by comparison).

So the boy is thinking of the black egg. It's a mystery, a wonder, one of many in the tale, and it's a hook that keeps the memory of the story of the city alive in his mind.

As for why the black egg is focused on... (speculation reigns for the rest of this post)

Yes, the white one, the true myth of the phoenix would represent a renewal for a Baghdad that surely needs it, at least as far as the modern Baghdad the boy inhabits depicted in the comic (I do not wish to make any judgment on how accurate or inaccurate the depiction is to reality). I did find this article that tries to dive into the reasoning behind the deviation from the regular myth and what it might represent. I am not sure its conclusions are correct - the article seems to assume that nothing hatches from the egg, representing stasis and stagnation rather than rebirth and renewal, and bases the interpretation on that. That's a distinct possibility and a good opposite to the white egg, but the story leaves it ambiguous, explicitly leaves it a mystery, in both text and image (although the panel gives it a sinister spin).

A simpler interpretation, but possibly more relevant one, is that the black egg is intended to be just what it is, the hook that keeps the story in the mind of the child. The Baghdad of Dreams is the city that was sold to Morpheus, and it will live on in dreams for all time, by the terms of the bargain. So long as the story lives on, so does the city, and the black egg, the "Other Egg of the Phoenix", is just one of many mysteries and wonders (like the globe of demons, the door of fire, the merchants ridiculously convoluted tales of mystical origins for their regular fare (true? in dreams who can say...) or any number of other things that stick in my head just from memory) that hook and keep the story alive.

Not the answer you're looking for? Browse other questions tagged comics vertigo-comics the-sandman or ask your own question.

9
Why does Cyclops believe Phoenix will reverse the de-powering of most mutants?
55
What does the Spider-man symbol on 1980's comic covers mean?
18
Does the order of the characters in the titles of “Superhero Versus Other Superhero” comics matter?
12
What does Chirrut mean by “The strongest stars have hearts of kyber?”
4
What does the Cuckoo represent?
7
Does it matter in which space the Stones are placed?
11
What's the name of that comic team with genetically engineered government agents?