Was there ever a villan who collected Spider-man's discarded webbing or stole his cartridges/webshooters?

I feel like enough of Spider-man's enemies have had enough of a background in chemistry and technology to have been able to analyse and replicate spider-man's spider webs. Especially if they stole his web shooters, web cartridges, or even just picked up one of the many webs he leaves around town and analysed it before it dissolved. At the very least, it would have helped them understand it, and maybe even use it or find a counter to it. Have any of them done it?

In The Inferior Deadpool #10, Volume #4, Deadpool steals one of Spider-Man's web shooters. 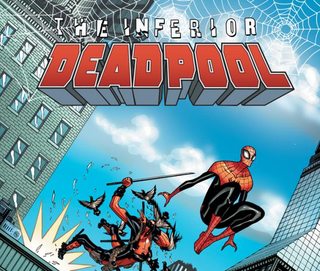 The site where I found this image claims it's not the first time Deadpool has done this (click to embiggen).

In Amazing Spider-Man 546 a villain called Sean Boyle, aka the Spider-Mugger, managed to steal one of Peter Parker's web-shooters. He used it to ensnare people that he wanted to rob, while wearing a Spider-Man mask. 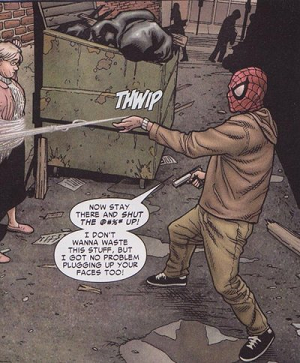 Sean was killed a few numbers later and never learned the secret of the formula, but at least he realized what a treasure he had found and used it for crime.

In Marvel's Ultimate Comics, Arcade is a very rich gamer with a hatred of mutants. Among other weapons, he utilizes web shooters. He claims that one of his employees reverse-engineered it "from from some polymer he scraped off a wall in Manhattan". It was most likely Spider-man's webbing that was reverse-engineered.

The web-shooters seem to have a side-effect though: Arcade just wouldn't shut up, as pointed out by Wolverine. It seems Parker's loquaciousness is catching.

As a side-note, Arcade was kind of a badass in this arc. He soundly defeated Nightcrawler, and put up a moderately good fight against the X-men as a whole.

In the mainstream continuity, an argument could be made for Venom to have 'duplicated' Spidey's webs. When Venom uses webbing, he produces it himself. It is otherwise very similar to Spider-man's. Like Spidey, Venom's webs last for a bit. Since the Venom symbiote first bonded with Parker, it is likely that it took the knowledge of how to create webs from Peter's mind.

Carnage, Venom's offspring, also uses web-like extrusions to swing. Unlike Venom, he seems to retract these extrusions into his being again after swinging. He is almost never seen to mimic any of Spidey's other tricks (such as impact webbing or even encasing people in webbing). It isn't clear if this is because he refuses to leave behind his body mass (since his extrusions are clearly part of himself, as opposed to Venom's) or because he is unable.

This discrepancy between the two symbiotes is what leads me to believe Venom produces 'real' webs (duplicated from Spider-man's) while Carnage does not.

Not the answer you're looking for? Browse other questions tagged marvel comics spider-man weapon or ask your own question.