Where is Themyscira located?

In the Wonder Woman film Themyscira is an island apparently hidden from the world by an illusion of fog. Captain Steve Trevor and the Germans stumble into the fog and find the island.

Based on the timeline of the movie, the island appears to be within a day or two boat ride from London.

Where is Themyscira located?

Answers from the DCEU preferred, but info from the comics is also appreciated if no details exist.

Like every other place in the comics world, it's "nowhere in particular"; in fact, what we saw in the movie was likely impossible to put anywhere in the real world. My best guess, though, is somewhere in the Mediterranean, specifically the Aegean Sea -- off the east coast of Greece. 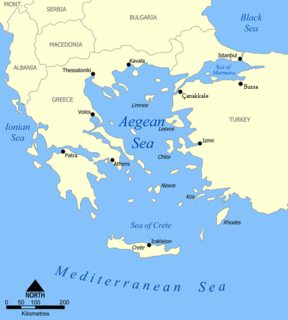 In the movie, they are pretty careful to never reveal where the island is, other than somewhere on the open sea. What we know is that:

The Ottoman Empire, during WW I, consisted of most of modern-day Turkey, Syria, and Iraq, plus land on either side of the Red Sea. I don't remember if they specified where in the Ottoman Empire the German base was, so we'll assume it was somewhere in the middle.

If you flew straight from one of those regions, the nearest open water is either the Aegean Sea (the body of water in between Greece and Turkey) to the west, the Mediterranean Sea or Red Sear to the south, or the Black Sea to the North. The Black Sea and Red Sea don't have good open-water access to the Atlantic (you'd have to sail really, really close to Ottoman Empire land, e.g. up the Suez Canal or right past Istanbul), so those are unlikely to by right. We don't know how far Trevor flew after taking off, but he was still being pursued by the navy, so it's unlikely he flew back over land at any point. The Aegean Sea would fit, both logistically and thematically (with the Amazon and their heavily Greek-based mythology), so it's as good a place as any to stick the island.

The only real problem is that it takes weeks on a wind-powered sailboat to sail from Greece to England. (It's ~2800 nautical miles, and the average speed for a sailboat appears to be ~7 knots, which means about 17 days or so). It certainly does not seem like they spent weeks on that boat, which would imply that Themyscira is much further west.

However, I think the filmmakers recognized this problem and tried to explain it away -- Trevor makes a remark about "hitching a ride" part of the way to London, meaning that the trip went much faster than it should have. This kind of remark would only be needed if the trip "should have" taken a long time and only took a few days -- again, fitting perfectly with an island near Greece. (Note: this still doesn't quite make things fit -- even the fastest ships in WW I would have taken several days to make that trip, while the film implies it happened overnight, which is basically impossible -- just not by that big a margin).

It also seems a bit unlikely that an island the size of Themyscira, in the middle of a body of water as relatively small and well-traveled as the Aegean (which has tons of islands in it) would remain hidden until 1920, but we can possibly chalk that up to magic.

(The other option is that the island is much further into the Mediterranean, putting it closer to England, but that raises the question of why Trevor didn't turn inland and land in friendly territory before he was shot down.)

Themyscira, in the comics, isn't technically the name of the island. It's a place in Turkey where the Amazon's used to live. They were later moved to Paradise Island, which they have taken to calling Themyscira or New Themyscira in honor of their old home.

The location of the island has changed over time (literally in-universe -- at one point they started floating around the ocean). I believe that it's primary location was typically somewhere in the Aegean Sea. Later, it floating off to the East Coast of the US, then vanished.

Not the answer you're looking for? Browse other questions tagged dc dc-extended-universe wonder-woman wonder-woman-2017 or ask your own question.

8
How does Steve Trevor end up in Themyscira?

10
How do the Amazons of Themyscira know English?
23
What are the Justice League members’ weaknesses?
10
What nationality is Steve Trevor?
5
Why didn't the Amazons kill Steve during the beach fight?
8
How does Steve Trevor end up in Themyscira?
1
In which city is Star Labs located?