Did Palpatine draw power from Hatred or Suffering?

Throughout the movies and the limited number of comic books I've read, I never got the impression that Palpatine drew power from hatred. He didn't seem to "hate" the Jedi or the Republic, he simply viewed them as obstacles in his way to absolute power.

In terms of suffering, Palpatine was born on a rich planet, and had an extremely prominent position in the Galactic Senate. The only real suffering I can think he suffered was that of his dis-figuration after his fight with Mace Windu, but it seems he simply wrote it off and used it as a power ploy.

Sith are said to grow more powerful using Hatred and Suffering, and as far as I could see Palpatine didn't really use either of these facets in his powers. Even in his fight with Luke, he didn't seem angry at him, more amused that some 20-something from a Desert planet was trying to kill the Emperor of the galaxy.

If we compare it to someone like Kylo Ren, who drew his power from his hatred of his family and used the suffering of the pain of his wound in the fight against Rey, or Darth Vader; who hated the Jedi (especially Obi wan) and suffered greatly from the pain of his suit.

Are there any examples we see of Palpatine enraged or experiencing suffering and using these powers to his advantage?

Palpatine didn't suffer much so he could not draw power from his own suffering in the same way that Vader could. Palpatine was primarily motivated by power, and there are hints that he hated the Jedi because the Jedi had power under the Republic and the Sith did not (but used to):

Once more the Sith will rule the galaxy.

Palpatine also gave off some very hateful looks when fighting Jedi. For example, when confronted in his office by Mace Windu and three other Jedi Masters: 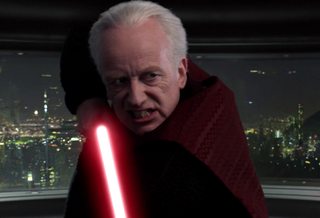 And a snarl for Yoda: 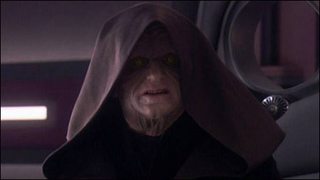 There is further evidence that Palpatine primarily drew strength from hatred. For example, he told Luke that hate would make him powerful:

Yet when Palpatine used Force Lightning against Luke, he did not encourage Luke to turn that suffering into fuel for the dark side.

Other canon sources indicate that Palpatine taught Vader the importance of hate in particular as a source of strength. Below is a quote from the canon novel Lords of the Sith, consisting of Vader's thoughts about Yoda's vs. Palpatine's teachings:

Yoda once had told him that fear led to hate and hate to suffering. But Yoda had been wrong. Fear was a tool used by the strong to cow the weak. Hate was the font of true strength. Suffering was not the result of the rule of the strong over the weak, order was. By its very existence, the Force mandated the rule of the strong over the weak; the Force mandated order. The Jedi had never seen that, and so they’d misunderstood the Force and been destroyed. But Vader’s Master saw it. Vader saw it. And so they were strong. And so they ruled.

Even Vader used his suffering mainly to fuel his hate, and in turn used his hate to gain strength.

Without the neural connection to his armor, he was conscious of the stumps of his legs, the ruin of his arms, the perpetual pain in his flesh. He welcomed it. Pain fed his hate, and hate fed his strength. Once, as a Jedi, he had meditated to find peace. Now he meditated to sharpen the edges of his anger.

I believe you are misunderstanding the Dark Side. You don't have to pick a single emotion to draw power from.

Hate, suffering, fear, the Dark Side is powered by all of those things.

Any Dark Side user can draw power from all of those emotions.

Sidious, like Vader, Tyranus, and Maul, no doubt draws power from all of them. He likely also draws power from causing harm to others and enjoying their suffering. He does always seem to have that half-smirk of satisfaction when he does something that he knows will lead to suffering (and is confident he's not being observed).

"The Force is what gives a Jedi his power. It's an energy field created by all living things. It surrounds us and penetrates us; it binds the galaxy together." - Obi-Wan Kenobi

That's the first thing to understand. Emotion is not the fuel that powers the Force. The Force is the power. Traumatizing events do not create batteries of the Force for individuals to later draw on.

So your question is based off of a faulty premise. "Are there any examples we see of Palpatine enraged or experiencing suffering and using these powers to his advantage?" Yes... but not how you think.

"Anger and pain are natural and part of growth. They give you focus. They make you strong." - Darth Vader

Let's talk about the Sith. The Sith focused on anger, fear, and pain to gain power from the Force. They followed a philosophy that encouraged the strong to rule over the weak, or even destroy them.

The term "Sith" is generally used synonymously with "The Dark Side". Individuals who used the dark side drew their power from darker emotions. However, this does not mean that the darker emotions were the source of the power, simply the channel by which the individual chose to focus their power.

Think about it like this, you can be the calmest person in the world, and shrug off provocation, or you can get enraged by the littlest thing and beat people up to achieve your goals. Both your goals and your methods will be dependent on what kind of person you are. The Jedi (or light-side users in general) used the first path, and the sith (or dark-side users) the second.

And here is where we get to the crux of your question, Sidious never appear to be enraged (or suffering/hateful as you put it). A calm man can punch just as hard as an enraged man. The power Sidious was using was channeled through his hate of the Jedi even though he never betrayed this hate to an outside observer.

If you want specific examples of the closest we see Sidious displaying the "expected attributes" of the dark side, I think the end of Episode III will be the closest you'll get. But also bear in mind that one does not need to manifest the extreme state to have power. The emotion is simply the channel or focus.

I also want to note that dark side users didn't need to draw on their own emotions. They could also use suffering and pain they caused, or the hate of their enemy to their advantage. This is where I think the misconception that the emotion causes the power came from.

Palpatine hated inhibitions, inhibitions and obstacles coming from any side. In Canon, his character is not yet fully developed (except in somewhat subpar novel Lords of the Sith). but in Legends, there is excellent book Darth Plagueis and some interesting works like Book of Sith. They do really shed on light on his innermost thoughts and motivation.

Palpatine believed that weak should serve and strong should rule, outlook espoused by many Sith. He also held notion that powers is goal unto itself, and only real fear is to lose it .

He became so powerful, the only thing he was afraid of was losing his power, which, eventually, of course, he did ...

Also, anything standing in the way of power is either an obstacle that must be removed, or weakness that would cost dearly those that have it. His reason for hating Jedi Order (and Light Side in general) was exactly because he saw them as obstacles that kept him for achieving his full potential. In book "Darth Plagueis" he and his master even mused that Light Side represents perversion blocking natural flow of the Force, i.e. that Dark Side is the complete Force, always moving, always striving for something better and more powerful, and that Light Side represent aberration that wants to keep things stagnant.

Palpatine kept scheming and deceiving all his life until he became Emperor, and even after that. But deep inside he hated all that charade. We could see that he enjoyed shedding his mild-mannered persona and displaying power without hiding. One especially revealing moment is his remark to Yoda

I have waited a long time for this moment, my little green friend.

From that, we could see his patience, but also strong desire to "have his chains broken" , and Jedi Order was among strongest links in that chain. He also toyed with Senate for long time, but ultimately hated them too and finally got opportunity to get rid of them. It is reasonable to assume he would, at proper time, lose other "crutches" he used like Vader, Empire itself and even his aging body . Although they served him well, in his mind he had a reason to hate them, as they restrained him from doing things directly and being even more powerful then he was.

Not the answer you're looking for? Browse other questions tagged star-wars the-force darth-sidious or ask your own question.

61
Why didn't Luke become disfigured when he was electrocuted by the Emperor?
24
Is it "the Jedi way" to kill a defenseless being if they pose a sufficient threat?
75
Why did Palpatine care about Anakin Skywalker in the Prequels given Palpatine's pretty good Force Vision?
13
Why didn't Emperor Palpatine use a lightsaber to prevent his fall into the pit?
18
Could several Jedi peacefully overpower one Sith opponent through nonviolent Force techniques?
11
Did Master Yoda Guess that Palpatine was Evil before Anakin turned?
13
Why did everyone applaud when Palpatine announced he was going to disintegrate the republic?
11
Why did Darth Sidious wear a cloak?