Did the duke's daughter dreaming of goblets of sour blood have any influence on Vassily's decision?

While revising What did Vassily see when he looked at the sleeping woman? I read "The Hunt" again, just for the fun of it, and wondered about Vassily's motivation in the end of the story. While Valorum's answer is most certainly correct, I can't stop thinking whether there was more to Vassily giving up on pursuing Natasha than her being just a human.

I am talking about this panel: 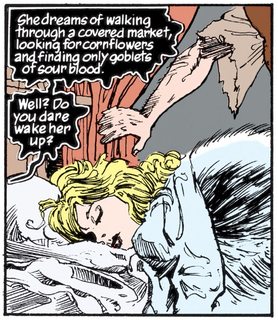 There is also this panel, where Vassily says "it was about dreams", which I took literally on my first reading: 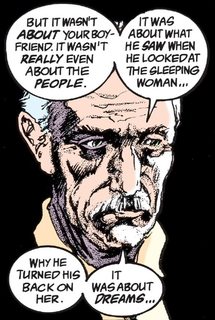 Is there anything to support that Natasha's dream had contributed to Vassily's change of mind about her?

Valorum's explanation of Vassily's refusal of "Natasha" is very nice, and also has support from the text and the author. However, I have a slightly different theory, based on different pieces of evidence from "The Hunt." I think that Vassily's infatuation with the Duke's daughter was solely due to Desire's influence, which dissipated when he gave up the emerald heart. (Ergo, I don't think that her dream had any part in his refusal; I think it's just interesting extra story pieces.)

While the discussion here isn't yet quite complete, it's clear that the emerald heart of Koschei the Deathless is, in some way, connected to Desire. I suggested that Desire may be trying to push Vassily into entering a desire-based relationship with the Duke's daughter, so as to claim him for its domain. (Claiming humans for a domain is a thing among the Endless; Desire, Despair, and Dream fight over Emperor Norton, for example, in a different story in Fables and Reflections. Despair is also shown to expend much effort trying to draw people into her realm of depression in Brief Lives.) Desire's influence over Vassily manifests through that emerald heart.*

It's instructive, I think, that Vassily does not begin to covet life outside of the forest, or women at all, until he is exposed to the heart. Once that happens, though, he uproots his life in the forest completely to pursue this one woman who he's only seen a miniature photograph of.

But what's most relevant to this answer is that his infatuation with Natasha (or whatever her name is) simply disappears after he gives up the heart to Baba Yaga. As Desire's influence over Vassily wanes, he completes his quest to meet the girl, but ultimately decides to leave her after returning the miniature (behaving outwardly as though that was always his mission, perhaps to save face in front of Dream and Lucien).

Then, having escaped Desire's plot to entrap him in a relationship that was likely doomed by social class and personality, he ultimately settles down with another of "the people" that he had encountered during his journey.

* It may be interesting to note that the fairy tale "The Death of Koschei the Deathless" revolves around Koschei's coveting of another's wife. In other words, it appears that Desire had much to do with the original owner of this emerald heart.
Additionally, while we don't know when the old Romany woman received this emerald heart, she does tell Vassily that her life involved many "mistakes" with all those young men who looked at her "with fire in his eyes," and at least one failed romance (which, I just noticed, also involved running away from a tribe and probably attempting to marry out of her social class) that ended in a broken heart. Those parts of the old woman's story may also bear the stamp of Desire's influence.

Not the answer you're looking for? Browse other questions tagged character-motivation vertigo-comics the-sandman or ask your own question.

7
What did Vassily see when he looked at the sleeping woman?

14
Why did Peter Pettigrew have the Dark Mark?
14
Why did Voldemort have to torture Garrick Ollivander for information on the Elder Wand?