Book from 60s with dinosaurs, spaceships and big bang

This is a book I read years ago - likely in the late 1960s or early 70s. It was a hardback, and I think (long time ago) the cover had a T-Rex strapped to the back of a rocketship in space.

I am sure most of the story went over my head at the time, but I think the plot was of aliens that somehow were stranded on earth in the time of the dinosaurs. T-Rex was vaguely similar to the aliens, so they put them through some forced evolution to make companion/servants. There was plotting by the T-Rex against their creators.

The book ended with the aliens managing (either through time dilation or time travel), to get to a "big crunch" of the universe collapsing into a black hole and a subsequent big bang. By being around during the big bang they were able to shape the new universe more to their liking, and they ended up back on Earth - and I wasn't sure if "our" earth was the new one universe or the old one.

I think that the author was east European or Russian, but now I don't know why I think that.

Despite reading it as a kid, it was definitely not young adult material, which is why I may have missed whole important elements of the book, but it has always stuck with me.

Try J.O. Jeppson (a pseudonym for Janet Asimov), "The Second Experiment"
I never read this, so don't know for sure if this is your query, but the cover image always stayed in my memory. 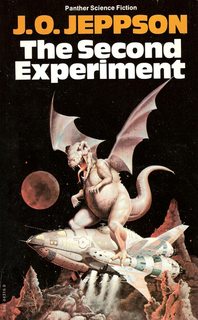 THE ROIISS—once the masters of the universe, now evolved to pure thought forms. Engaged in war with Life itself, they had no time for Rya, their single surviving daughter.

She was the last of the dynasty. With her faithful robot Tec, she took the last ship to a star with nine planets, the third of which had life.

Then she decided it was time to find a mate. And that this planet was as likely a spot as any to begin her search....

9
An author/book that described the future history of humanity, going as far as the Big Crunch?
23
Out-of-control starship results in some crew members landing in a rebirthed universe?
11
Book where a man unlikely to survive is stranded on an alien planet with water under the earth in plants
12
Looking for a book with two main characters and dragons in the plot
5
Short story I read in a collection by several authors, ship rides to edge of the universe and back, experiences big bang
10
Looking for a specific children's time and space travel book 50s or 60s
4
Book like Time Safari with invisible and sentient dinosaurs
10
Cartoon series where humans travel by spaceship and find a planet with dinosaurs