How did they get away from the tsunami if there were 45 minutes before the next slide?

In Sliders season 1, episode 6 "Summer of Love", at the end of the episode they slide onto a world and Q-Ball (Quinn Mallory) says the next slide is in 45 minutes. Then they hear a rumbling and they walk around the corner to see a huge tsunami overtaking the Golden Gate Bridge and Crying man says He can't swim. Then the episode ends. Episode 7 they are simply on another world.

How did they get away from the tsunami?

This is partly a problem with the episode ordering of FOX, and partly untold.

"Summer of Love" was supposed to be episode two. It was to transition them from the "timer can open portals whenever, only it's super dangerous and might short out at any time if not given enough rest" model of the pilot to "the weakened timer can open portals at one specific time at each world, and if they miss it they're stuck there for 29 years" model used in the rest of the series. However, because FOX executives decided to alter the episode ordering (putting what it saw as the most exciting or easy-to-advertise episodes early on when the show was seeking an initial audience... see this question for more details.) when "Summer of Love" finally aired they'd already been using the "29 years" rule in several previous episodes, it got very confusing (and the scene explaining why the timer has a 29 year rule was cut), leading to constant fan questions of "why don't they just advance the timer, even if it's dangerous" because they did at the start of this episode.

The other major problem with the episode ordering changing was with the beginning and ending of episodes that were meant to be connected, most notably with the situation your question describes.

When the episode ended, they did indeed face a Tsunami with too long on the timer. This was meant to transition directly into episode 3, which was intended to be "The Prince of Wails." Unfortunately, "The Prince of Wails" aired BEFORE "Summer of Love" and so this got especially confused.

"The Prince of Wails" opens with them on top of a high tower surrounded by water (and with a shark nearby). When the episodes are played out of order, it looks simply like one episode they open with a difficult situation on a weird world (as they often opened episodes with, without explanation), and in an unrelated episode they end the episode facing an impossible situation that never gets resolved... and in these two cases both happen to involve water. But you can see other clues to the proper order... most notably, in "The Prince of Wails" they are STILL in their 60s style clothes from the episode "Summer of Love." 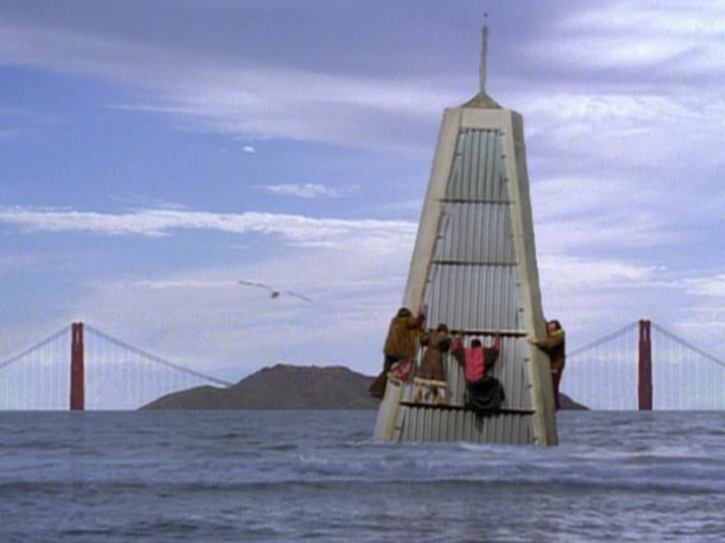 We never actually see them 'escape from the tsunami' between episodes, but it's assumed that they somehow manage to climb the tower fast enough (or perhaps got into a working elevator or something and climbed from there). Compounding the problem with the episode scheduling, which the people producing the series had no control of, there was writing and staging consistency problems (such as it being dark when they had '45 minutes' to seeming like well into the morning when they actually had to slide, or whether tsunamis really would work that way, or if escape was at all feasible), which pretty much was par for the course of Sliders as a whole.

That was the end of The Sliders in that World after they had just slided into that alternate world from another, they all died. There was just simply not enough time for them to escape and find safety any where with the gigantic enormous mountainance high wave of the ocean breaking so close near by moving fast with no time left to find any safety, that's why it was the end for them at the end of the episode. The series Sliders Episodes must be in a mix up order with their alternate parallel world's where they still exist living and doing other things, possibly still sliding into other parallel world's together even Theo their others died in another world maybe to find themselves facing the end again in a different one, or making the Slide at the last moment to another world to safety.

Not the answer you're looking for? Browse other questions tagged tv science sliders or ask your own question.

8
Why did FOX mess up the running order of Sliders?

5
How did the Dynamic Duo go from wearing civilian clothes at the top of the Batpole to wearing their costumes at the bottom?
9
Can anyone tell me if there were any planned follow-ups to The Prisoner? If so, what were they?
12
How long was Rick in the hospital?
56
Potatoes were alive and sprouted on Mars: How were they preserved on the journey there?
8
Why did FOX mess up the running order of Sliders?