Who was the relief navigator in Star Trek: The Motion Picture?

After Ilia is taken by V'ger, another woman takes the navigator station. Who was this character? 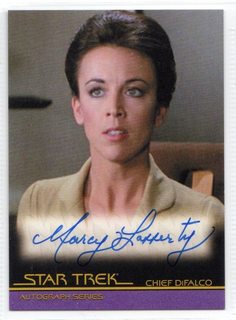 From her official Star Trek page:

Starfleet officer aboard the U.S.S. Enterprise under the command of Willard Decker and later James T. Kirk. She was serving as relief navigator when the Enterprise intercepted the V'Ger machine lifeform. When Ilia was abducted by V'Ger, DiFalco replaced her in her post on the bridge.

She was played by Marcy Lafferty, William Shatner's second wife, married to him from 1973 to 1996.

Not the answer you're looking for? Browse other questions tagged star-trek character-identification star-trek-the-motion-picture or ask your own question.