Space stingrays planet is dying; human becomes one of them

I read this book maybe 8-10 years ago, and it was in the well-worn sci-fi section of my library so I'd put it in the 80's-early 90's. It was in English and I feel like I remember a giant stingray(?) on the cover?

All I can remember about the plot is that a human was reborn as one of the space stingrays that swim around this gas giant planet. I can't remember why he was doing it, just that a middle-aged guy was basically turned into one of these giant stingray things.

I also remember the twist ending, which was that he ends up figuring out that

when the oldest space stingrays die their bodies sink to the bottom of the atmosphere and block the energy coming off the planet, which is killing their species.

I don't remember any names or other helpful info, and googling space stingrays dying killing planet book is, unsurprisingly, not turning much up...

Here's a couple more points from the comments;

Could possibly be Manta's Gift by Timothy Zahn. It was published in 2002 so definitely within the time range that you read it but somewhat outside your estimated publication date.

When Matt Raimey had his accident, he thought his life was over. He never dreamed, in his wildest fantasies, that he'd end up in a spot like this. In the toxic atmosphere of Jupiter, born into the body of an enormous creature that looked like a cross between a manta ray and a dolphin, he is living a new life, unlike any humankind had previously experienced.

As far as the behind the scenes political conflict, this review gives a little more in-depth summary. The humans believe that the aliens have access to a stardrive capable of interstellar travel and the hidden motive behind their entire plan is to get their hands on it. However, Raimey isn't thrilled with their plan which leads to the conflict between the political and scientific leaders that you mentioned.

The point about the the energy coming from the planet and the main character meeting an elder both sound familiar but I don't have the book on me and can't find any references to them online.

"Space Stingrays in a gas giant planet" certainly applies to James Tiptree Jr's Up the Walls of the World. It was published in 1978, at the low end of your suggested time span. Some of the covers featured space stingrays. 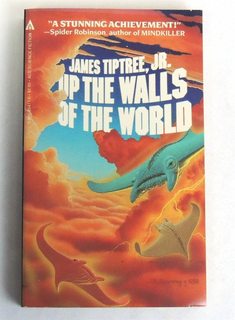 Sadly, the plot points you recall don't match my fuzzy plot recollections too well; the space stingray planet is being threatened by some kind of Cosmic Entity, and the space stingrays want to escape by swapping their minds for those of humans. I don't remember any Space Stingray Graveyard blocking planetary heat.

However, enough similiarities exist for me to offer this up.

Not the answer you're looking for? Browse other questions tagged story-identification aliens space or ask your own question.

9
Sci-fi novel with an "Avatar"-like premise: disabled character is put into an alien body to study/spy on aliens