60/70's novel: virus kills all humanity except genius people; two survivors try to get to the West Coast

Written 40 or 50 years ago - a virus kills off all in the world except genius IQ people - two characters enter the picture: one is a teenage boy who is a world class pianist; the other is a girl of similar age who is in a coma for a few weeks. They leave and try to get to the West Coast, I think, and invent a vehicle that can ride railroad rails. That's all I can remember. It was excellent. The boy is full of real groaner puns.

The author was introduced as the next Heinlein (along with a lot of others, I suppose). I don't know anything more - if he became famous, died young - just dunno.

This sounds very much like Emergence (1984) by David Palmer. Blurb from Goodreads:

The following day a worldwide attack, featuring a bionuclear plague, wipes out virtually all of humanity (i.e., Homo sapiens). With her pet bird Terry, she survives the attack in the shelter beneath their house. Emerging three months later, she learns of her genetic heritage and sets off to search for others of her kind.

The teenage boy in the book is called Adam and is an accomplished pianist, cook, driver and mechanic etc. 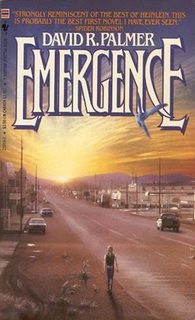 10
Story ID: A pre-teen girl who is a genius crosses the country in a van

4
Help identifying a film involving people living in regulated areas of the planet, get shot if they try to escape
4
TV episode where people are in a cave/tunnel and get teleported to the other coast
5
What's the story (tv series? film? novel?) where two people have a shoot-out while each stands in a tub?
8
Scifi novel about two battling AI's, where one is trying to protect humanity and the second one is trying to destroy it
6
Middle grade novel about two kids in an underwater city, one coming from the surface; they get involved with a gang
45
Pre-1972 sci-fi short story or novel: alien(?) tunnel where people try new moves and get destroyed if they're not the correct ones