Does Wonder Woman ever get cold?

I'm sure it's common knowledge that Wonder Woman customarily wears a costume with bare arms/legs/shoulders. Since her backstory usually has her growing up on some sort of tropical island, it makes sense that she'd be used to running around in a bathing suit. But since she goes on adventures all over the world(s), it seems to me like more often than not, she'd be freezing, whereas someone like Batman would be just fine in his full bodysuit and thick cape.

When I brought this up in chat, however, I got this response:

I'm gonna say no, on the basis that she's a demi-God.

So, since there's some disagreement here, I wanted to know, has there been any version of Wonder Woman who has been uncomfortably cold due to her costume (or lack thereof)? Or is super-heat-circulation one of her powers?

Well, there was a scene in an issue of Justice League of America, (vol. 1, from the late 1970s) written by Steve Englehart where Flash, Wonder Woman, and (I think) Batman were in a snowy area in some mountains (maybe the Himalayas). I think it was during his "Manhunters" story, so probably issue 140 or 141.

Flash is running in place and rubbing his arms to stay warm. Wonder Woman is simply standing there. Flash asks her just that question - if she doesn't get cold in that outfit. I don't think she responded (may not have heard, I suppose; or, maybe he thought it but didn't actually say it), and he thinks to himself how he always feels like a "country bumpkin" (or some such) around her.

Note: being from the 1970s, Flash is Barry Allen, and is (happily!) married to Iris (West) Allen. It's not some hint of attraction between the two. He means it - she's an actual princess and all, and he's just a guy from the Midwest.

That's the only scene I can recall dealing with it.

In any case, Flash was obvious very cold, while neither Wonder Woman nor Batman seemed to be reacting to the temperature. Of the two, Batman's the only one whose suit could logical account for that. :-) Draw what conclusions you will! 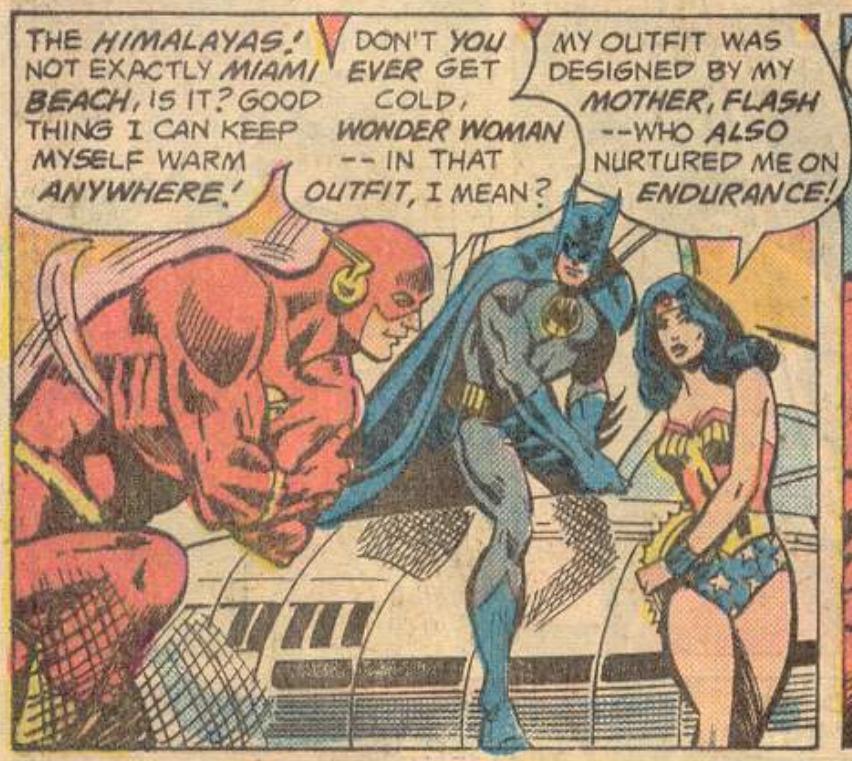 In the DCAU - Justice League Unlimited: The Balance Diana and Shayera (Hawk Girl) have this exchange:

At the end of the episode it is revealed that Diana does in fact sweat, but doesn't appear to suffer from cold.

The Wonder Woman Wiki has this to say

Although Wonder Woman’s mythos was returned to its original interpretation between 1966 and 1967, new abilities were added: super breath (to blow jet streams or transform water into snow); ventriloquism; imperviousness to extremes of heat and cold; ride the air currents as if flying; mental telepathy (even to project images); microscopic vision; the ability to vibrate into another dimension, and others which are listed in the Encyclopedia of Comic Book Heroes, Volume Two (1976). - Wonder Woman Wiki

Great question. In context, I think it falls under the tradition of "impractical sexy outfits" as conceived by modern artists. There was a comic about a decade back, the name is currently escaping me, about a woman warrior who actually wore full, practical armor. (This choice by the artist was taken to be quite radical, as I recall--the fact I can even find a screen shot to post should give some indication of how interested people in warrior woman in functional armor;)

It would be interesting to find out if there is any explanation of this, but my guess is there won't be much material because Wonder Woman's costume has nothing to do with her powers, aside from the accessories, and everything to do will book sales/revenues.

With the popularity of cosplay, I suspect will see even more emphasis on impractical outfits going forward. (Not that I'm complaining!)

I found a pretty hilarious discussion of this topic: Video Game Armor Logic

I understand you are looking for an in-universe answer, and I'm only adressing that in an indirect way, but it's easy to overlook that entertainment and media are businesses first and foremost, and this driver of aesthetic choices is nowhere more prevalent than in women's superhero attire.

She just doesn’t get cold. The lady can lift a mountain and has endurance and tolerance to extremes to match. In Gail Simone’s run, there’s a scene showing Diana hanging out with polar bears; she has icicles hanging off her but is in her usual costume and shows no sign of any discomfort whatsoever. This is a lady who can survive in space, mind, so long as she has breathing apparatus

Not the answer you're looking for? Browse other questions tagged dc powers wonder-woman or ask your own question.