Looking for SF novel from the 70s

I'm looking for a novel from the 70's (pretty sure). I believe it starts off with the court martial of a starship captain. The story lays out the reasons for the court martial. It turns out the ship was sent out to visit established colonies and just show the flag. When they arrive at one colony they detect a ship vanishing into hyperspace. They visit the colony and everybody has vanished. After a search some colonists are found. Only they've been hideously modified and are hiding in a cave. The captain sends everyone else back to the ship and talks to the colonists. They beg him to kill them, so he does. That's the reason for the court martial. The truth comes out and he is acquitted.

There was a second book where a starship arrives at another colony where the changes are just starting to take effect. The colonists are giving birth to monsters. A female crewmember gets pregnant and gives birth to a monster.

That's about all I remember. Starfleet headquarters was in San Francisco, I think.

This is definitely A Thunder Of Stars (Venturer Twelve, Book 1) by Dan Morgan and John Kippax. I remember it well, though I don't see a handy on-line synopsis.

The description in the question is as detailed and accurate as anything I can come up with from memory.

Although I can't describe the second book, the points I remember are: starship making a show the flag visit to a colony planet, colonists at first appeared to be gone, but a few are found in a cave, hideously modified, one colonist begged the captain to kill them, the story was told in a courtroom setting with the photos of the modified colonists being the final exhibit which exonerates the captain. 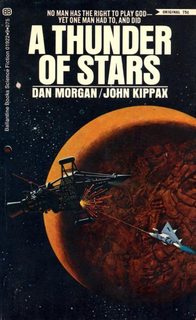 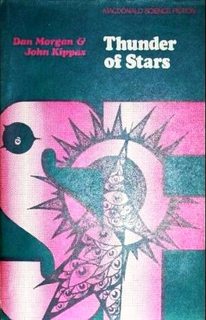 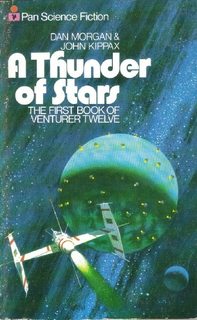 14
Starship captain put on trial for destroying a colony

7
Six colonists from Terra are kidnapped enroute, and placed on different planet by unknown aliens. Novella 1980's read
14
Starship captain put on trial for destroying a colony
14
90s (or earlier) novel: on a cut off colony after FTL travel wipes out life and becomes impossible, an emissary woman starts a college
12
Spaceship in the jungle, war of the sexes
24
SCIFI Series. Humans can do point to point interstellar jumps but a supernova kills network
16
Scene from a SF book, long crashed starship crew send kids for water every dawn