I cannot recall the name of this anime. It's about people who can, with the help of some sort of crystal, get these bionic suits in which they fight against aliens with like yellow blood, and a group of three who want to extract the core from these aliens. The bionic suits of these three are also yellow.

Is it The Guyver? I'm not particularly familiar with the story, but it does involve a crystal that gives you some kind of armor and powers. The bad guy aliens if memory serves were after the Guyver in order to get its crystal.

I got it - its name is Hundred. 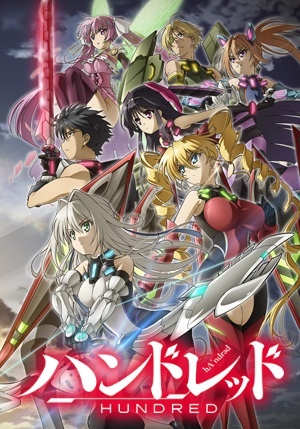 When an extraterrestrial organism known as "Savage" attacks mankind, the only technology capable of combating the enemy is a weapon known as “Hundred.” A survivor of a Savage attack, Hayato Kisaragi is a teenager boasting the highest compatibility level with the aforementioned technology and as a result, is invited to master his skills at Little Garden, a prestigious military academy aboard a battleship.

Over the course of his intense training for the battle ahead, he immediately attracts the interest of multiple female peers and gets drawn into a number of incidents as he tries to fight against the creatures that now inhabit Earth and threaten its safety. - Synopsis from MyAnimeList

Not the answer you're looking for? Browse other questions tagged story-identification aliens anime or ask your own question.

6
What anime features a boy with a gem or crystal that gives him powers to transform into an organic robot of some sort?
10
Identify a Sci Fi cartoon where they had space suits and would fight in outer space

3
Anime about a group of knight friends. One of them betrays the others but comes back to help them in the end
6
90s manga/anime about pilots merged into the backs of Gundam like suits
4
Mecha anime where 2 girls fight with mechas
4
Anime in which people in mecha suits fight yellow monsters, but the more they fight, the more they turn into crystals and eventually die
4
Anime where people live in a virtual reality world to escape from reality
6
Older anime featuring girls in powered suits with limited battery life 'illegally' fighting mutated people
5
Looking for an old anime or cartoon show of a family who can transform into green monsters